Experience Canada in style, travelling by train with VIA Rail to Toronto, Ottawa, Montreal and Quebec City, plus a full day trip to see the wonder of Niagara Falls. Marvel at the scenery, be inspired by galleries and museums, and soak up the culture of these amazing cities, each boasting its own personality and character. This independent tour, allows you to enjoy your holiday at your pace, but allowing you to take advantage of pre-booked, locally guided tours in each key location.

This holiday is available year-round (JV) 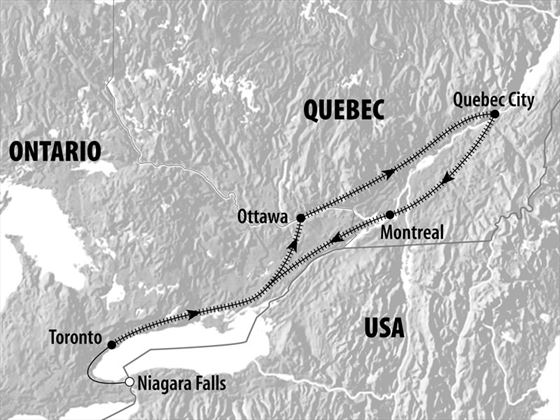 Arrive into Toronto International Airport and transfer independently to your downtown hotel for a three-night stay. Pick up your information kit when you check-in and then enjoy the rest of the day exploring the city and its many attractions.

Toronto is a vibrant and bustling city with a wealth of identities and attractions. Take a trip to the waterfront, see the Parliament Buildings and get lost in the excitement of Chinatown. Included in today is admission to the CN Tower – an astonishing building standing 335.33 metres tall. Ride the glass-fronted lift to the top and enjoy panoramic views of the city and Lake Ontario. With the rest of the day, explore more of the city or simply relax.

Take the full day to enjoy a sightseeing excursion to Niagara Falls, with the route guiding you through the beautiful fruit-growing district and wine region of the Niagara Peninsula. Step aboard the Hornblower which takes you on a breath-taking trip to the foot of the Horseshoe Falls, giving you an entirely new perspective on this natural wonder. You’ll have plenty of time to take pictures and admire the view, or you may want to take a stroll into the town. The highlights of today include a meal and a trip along the Niagara Parkway, which takes you along the Niagara Gorge Pass and the historic Niagara-on-the-Lake, before returning to Toronto for the evening.

VIA Rail/The Corridor: Toronto to Ottawa

In the morning, transfer independently to Union Station to board VIA Rail’s The Corridor train and head to Ottawa. Pass charming towns along Lake Ontario, the city of Kingston and the Thousand Islands region. Upon arrival into Ottawa, you’ll have the opportunity to explore at leisure for the rest of the day – we suggest taking a stroll along the Rideau Canal (a UNESCO World Heritage Site) or head to Byward Market. Enjoy two nights in Ottawa.

Take a two-hour panoramic sightseeing tour of Ottawa today, experiencing the beauty of this historic city, from the Parliament Buildings, Embassy Row, the National Gallery of Canada and much more. You’ll drive through parklands and scenic gardens, as well as taking a scenic route along the Rideau Canal. This tour allows you to hop on and off at any stops along the route, giving you the opportunity to really get to know this beautiful destination. The remainder of the day is free to explore the city’s many museums, galleries and boutiques.

VIA Rail/The Corridor: Ottawa to Quebec

Depart from Ottawa and continue your journey to Quebec City onboard VIA Rail’s The Corridor. Head for the Laurentians Past Montreal, along the shores of the St. Lawrence River and past charming towns and villages infused with beautiful French-Canadian countryside. The rest of the day is yours to experience at your own pace, getting to know Quebec City and experiencing the nightlife. Overnight in Quebec for two nights.

Spend the day in Quebec City, starting with a morning sightseeing tour. This is the only city in North America with city walls and gates, a distinction which earned it its UNESCO World Heritage status in 1985. There’s a wonderful ‘joie de vivre’ atmosphere to Quebec that you’ll notice instantly, as well as the wonderful historical feel to the city. Be sure to visit the Place Royale, the Basilica, the Latin Quarter and the Plains of Abraham, as well as many more points of interest that catch your eye. The rest of the day is yours to spend as you like, so why not indulge at one of the many gourmet restaurants.

Take a short ride to Montreal today, this time travelling along the northern shore of the St. Lawrence River passing Trois-Rivières and Cap-de-la-Madeleine with its national shrine to the Virgin Mary. Once you reach Montreal, prepare yourself for an afternoon exploring this amazing city, with walks down the lively St Catherine Street, fine dining and exhilarating nightlife. Overnight in Montreal for two nights.

Take a three-hour sightseeing tour of Montreal in the morning where you’ll see numerous highlights such as the Notre Dame Basilica, the financial district and the charming Latin Quarter. You will also visit the Olympic Complex, travel through the campus of McGill University and enjoy the panoramic views from atop Mount Royal.

VIA Rail/The Corridor: Montreal to Toronto

Depart from Montreal to Toronto today aboard VIA Rail’s The Corridor. Your journey will come to an end upon arrival into Toronto’s Union Station – transfer independently to the airport for your return flight.