The Eastern Discovery escorted tour showcases the very best of eastern USA and Canada. Beginning in New York, you’ll travel to Boston, walk along the Freedom Trail, tour the cities of Quebec, Montreal and Toronto, visit Niagara Falls and then head back into the USA to visit Philadephia and Washington, D.C. A fantastic trip that encapsulates the diversity of these popular destinations, the Eastern Discovery provides amazing experiences and wonderful vistas for memories that will last a lifetime. (ATI) 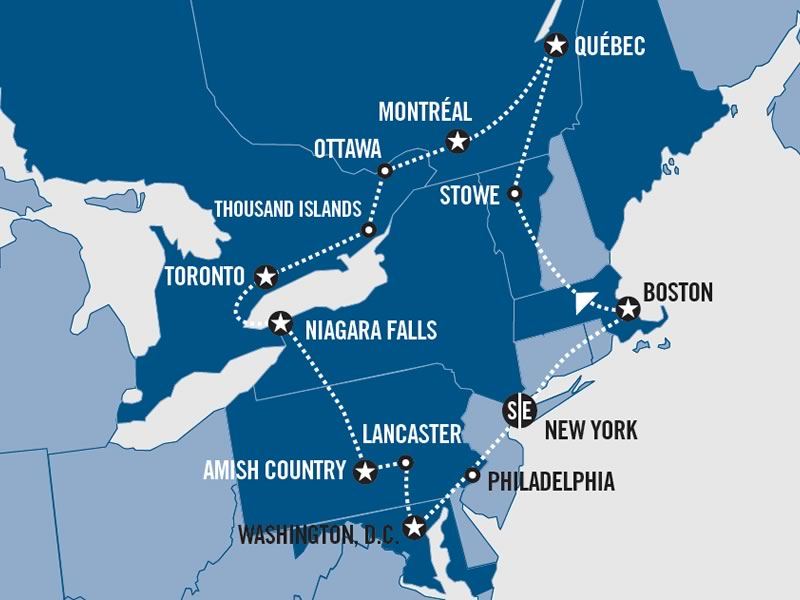 Pre and post tour hotel nights are available to for you to maximise your time away and explore the start and end cities independently. Speak to our sales agents if you would like to add this on.

Arrive in New York and make your way to the hotel to check-in and relax. The remainder of the day is yours to spend at leisure.

Leave New York for the historic New England region, travelling along the Long Island Sound and Hartford to Boston. Upon arrival embark on a sightseeing tour of the city. Take a walking tour along the Freedom Trail to view some of Boston’s most iconic sights, such as the Granary Burial Grounds, the Old State House, Boston Common and Faneuil Hall. After walking the cobblestone streets of Beacon Hill, one of the oldest neighbourhoods in Boston, the evening is yours to spend at leisure.

Travel through the New England states of New Hampshire and Vermont on your way to Canada, passing quaint villages and the scenic landscapes of the White Mountains along the way. In the late afternoon, you’ll cross the U.S./Canadian border to enter the province of Quebec – later, take the opportunity to dine on some delicious French cuisine.

Begin the day with a tour of the Quebec City, a UNESCO World Heritage Site and the French capital of the province. You’ll visit highlights such as the Quebec Provincial Parliament Building and the Citadelle, followed by a walking tour of the walled city where you’ll see the Chateau de Frontenac and the Saint Lawrence River. Take time for a spot of shopping and lunch before leaving for Montreal where, upon arrival, you’ll take a tour of Old Montreal which is known as the "Vieux Port". The evening is at leisure.

Leave Montreal for Ottawa, a vibrant city of parks, bright foliage and one of the most impressive parliament buildings in the world. In the afternoon, continue along the Thousand Islands Parkway to Toronto, which is located on the shores of Lake Ontario. There’s an optional excursion on the St. Lawrence River which takes you on a scenic cruise to explore the scenery.

Start today with a drive through Toronto’s business district to witness the impressive array of towering skyscrapers – most notably, the CN Tower which stands at a staggering 1815ft. From here, continue on to Lake Ontario, crossing the Welland Canal, to reach Niagara Falls. Stroll along Table Rock and view the incredible thundering waters of the Horseshoe Falls. There is also the option to take a boat ride to the base of the falls on the renowned Hornblower Niagara Cruise.

Drive through upstate New York, known as the Finger Lakes Region, to enter Pennsylvania. In the afternoon, visit the historic Gettysburg Civil War National Battleground, site of the largest battle every fought on American soil, as well as the place where Lincoln gave his famous address in 1863. Travel along the Susquehanna River to your overnight stay.

Journey through the rural countryside to Pennsylvania Dutch Country to visit an Amish museum and see their 300-year-old traditions and way of life. This unique way of living dates back to the mid-1850s and its people use no electricity, mechanical devices or modern equipment of any kind. In the afternoon, make your way to Washington, D.C.

Enjoy a tour of this world-famous city, including sights such as the U.S. Capitol Building, the Supreme Court, Library of Congress, the White House and the Lincoln Memorial. The rest of the day can be spent exploring some of the museums and galleries, or simply taking a walk along the banks of the Potomac River.

Transfer to New York via Philadelphia where you’ll stop to see the Independence Hall and the Liberty Bell.

Your tour ends today. it's time to head to the airport for your return flight home.

Rates are approximate from prices and can be subject to change and availability. Speak to your Tour Director to book these locally.