This holiday is a wonderful combination of beautiful scenery and vibrant cities, and as the name suggests, stunning mountains and glorious seascapes. It is an independent tour so you won't be in one large group, however there are some wonderful excursions included and your transportation will be by rail, coach, plane and boat so that you don't have to drive.

After flying into Calgary Alberta, you will board a scheduled coach transfer into the Rockies and the charming mountain town of Banff. After two nights here and an exploration of the beautiful national park, you will then take day excursion along the Icefields Parkway to the Columbia Icefield and Lake Louise, ending in Jasper National Park. Then begin a two-day rail journey on board the VIA Rail Skeena train which will take you through stunning scenery first to Prince George where you will overnight and then onto Prince Rupert. Here you change your mode of trasnport again this time to a ship and you will cruise along the spectacular Inside Passage of British Columbia through plunging fjords to Port Hardy, spotting eagles and whales along the way. From Port Hardy board a place to experience the scenic flight south to Vancouver, which will be your home for the next three nights. Enjoy a day trip over to Victoria and Butchart Gardens on Vancouver Island and a full day at leisure to enjoy exploring Vancouver, before it's time for your flight home. (JV) 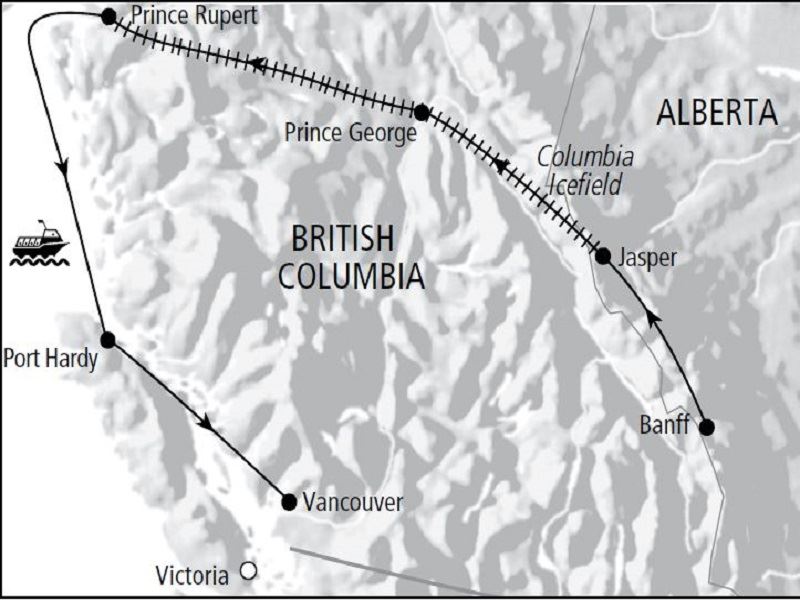 Fly to Calgary and transfer to Banff

Arrive into Calgary International Airport and transfer by coach towards to majestic Rockies and the mountian town of Banff, where you will stay for two nights.

Enjoy a sightseeing tour of the town of Banff and its unspoilt natural surroundings, including highlights such as Tunnel Mountain Drive which overlooks the beautiful Bow River Valley, and the Cave & Basin where Banff’s history began. At the end of the tour, you can choose to be dropped off at the base of Sulphur Mountain to take the gondola ride to the top for spectacular panoramic views (charge for gondola not included but we can pre-book this for you).

Today you will have an awe-inspiring coach journey to Jasper, taking in the spectacular Icefields Parkway en route. You will see magnificent glaciers, cascading waterfalls, turquoise lakes and lush meadows. The coach will stop at the Columbia Icefield where you will venture by Ice Explorer onto the massive Athabasca Glacier. You will also have a photo opportunity to take in stunning views of Lake Louise. Overnight in the lovely town of Jasper.

Enjoy the morning in Jasper then depart early afternoon for your rail trip to Prince George on board VIA Rail. This journey takes you past the highest peak in the Canadian Rockies Mount Robson, and across the northern region of British Columbia through the ancient forests and into Prince George. Here you will have a free evening to explore this interesting city, the home of the Lheidli T’enneh and Carrier Sekani First Nations People and capital of northern British Columbia.

Get back onboard the VIA Rail Skeena train for an early morning departure, to continue your journey to Prince Rupert. Enjoy a relaxing day onboard the train, admiring the dramatic scenery as you pass through the West Canadian countryside. Arrive in the port of Prince Rupert, steeped in the history of the Pacific Northwest.

Inside Passage Cruise from Prince Rupert to Port Hardy

Today you will travel the glorious Inside Passage, a paradise for photographers and wildlife enthusiasts. Sail to Vancouver Island through a maze of enchanting islands, marveling at the densely forested shorelines and deep fjords, massive ice-floes and jagged inlets. Have the opportunity to spot bald eagles, sea-lions and whales. Transfer independently to your chosen hotel in Port Hardy.

Today you will take a scenic flights down the coast and across the strait to Vancouver. On arrival in this lovely waterfront city, transfer independently to your chosen hotel for the next three nights and enjoy an afternoon and evening at leisure.

Enjoy a ferry ride across the Strait of Georgia and enjoy a day exploring the enchanting gem of a city - Victoria and the lovely Butchart Gardens. Return to Vancouver by coach and ferry for the night.

Enjoy a full day to explore the sights of Vancouver. We can book you an excursion such as a a gastronomic tour of Granville Island or a cycling tour, or simply stroll along the seawall to Stanley Park.

Transfer independently to Vancouver International Airport for your flight home

Departure dates with an * will have an overnight ferry and no overnight hotel in Port Hardy.

Best of Canada's West by Motorhome

Wonders of the Canadian Rockies