A magnificent itinerary taking in the stunning national parks and glorious coastline of the Atlantic Canada region. Spot wildlife whilst you hike scenic trails through national parks, enjoy the warm hospitality of the inhabitants, travel at your own pace and take time to discover quirky towns and historical sites (JV - Tides and Parks of Atlantic Canada). 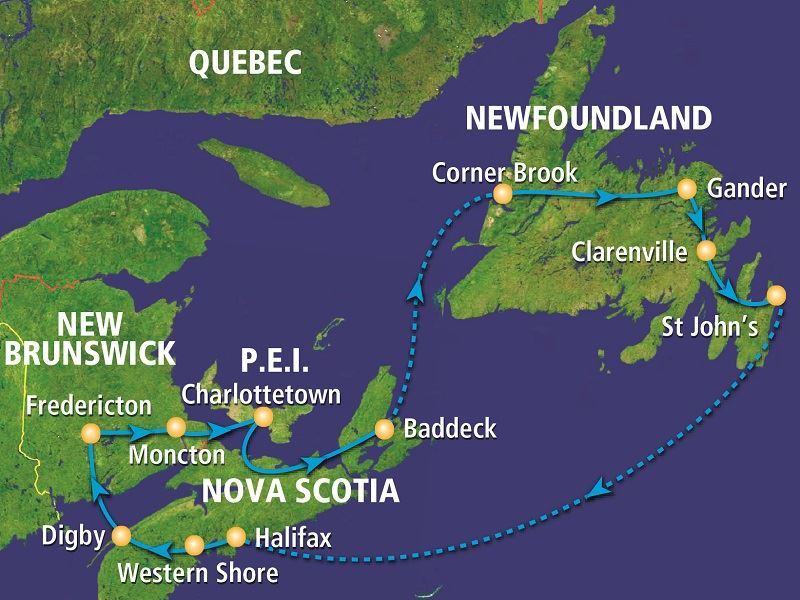 Arrive in Halifax and transfer independently to your hotel for a two night stay in this vibrant oceanside city.

A day to explore Halifax, with its fascinating maritime history and lovely walkable downtown. Stroll to the top of the Citadel which has guarded the city since the 18 century. Visit one or two of the fascinating museums charting the history of the city which amongst other things was the first responder for the Titanic.

Pick up your hire care and then drive along the Lighthouse Route to the picturesque fishing community of Peggy’s Cove and it’s famous lighthouse. Then continue along the coast to the UNESCO World Heritage Site of Lunenburg, founded in 1753 and is one of the best surviving British colonial towns in North America. Take the short drive to the Oak Island Resort where you can enjoy the facilities such as the indoor and outdoor pools, hot tub and mini golf.

Take the scenic route cross-country from the rocky south shore to the lush Annapolis Valley, with extensive woodlands dotted with lakes. Stop at the beautiful Kejimkujik National Park, where there are centuries old Mi’kmaq canoe routes and lovely hiking trails. Then it’s just an hour to Digby where you’ll be staying for the next two nights. Digby is a picture-perfect fishing port with its bustling harbour which is home to the largest scallop fishing fleet in the world. It is in a beautiful location on the Annapolis Basin which flows into the Bay of Fundy.

Today we can book you onto a wonderful wildlife cruise around Brier Island, a location teeming with marin life and which is a picturesque drive from Digby including two short ferry hops (the ferries run once an hour 24 hours a day and costs around for the $7.00 round trip). The two ferries are timed timed so that if you continue driving from the first ferry you will automatically connect with the second one (NB there is no time to stop!). The Brier Island Whale and Seabird Cruise leaves at 9.30 and 13.30 daily and you'll see myriad species including humpbacks, fin and the rare and endangered right whales,as well as
dolphins, porpoises and seabirds.

Enjoy the ferry ride across the Bay of Fundy, famous for having the worlds largest tides, to the capital of New Brunswick - Saint John. On the way stop at the Reversing Rapids, where if you time it right you will see the tide reverse the flow of the Saint John River – described as “Natures Tug-of-War”. You could also visit King’s Landing Historical Settlement – a living history museum with costumed actors and original buildings from the period 1820-1920, created from the buildings that were moved to make way for the Mactaquac Dam. Enjoy your evening in Fredericton, the capital of New Brunswick and with a lively local beer scene. If you’re there on a Thursday, then the Garrison Night Market is a must, with fabulous street food and craft stalls.

Some lovely photo opportunities today as you travel through New Brunswick past lots of covered bridges en route to Fundy National Park. Stop off at Hopewell Rocks – also known as the Flowerpot Rocks. Visit the Interpretive Centre here, a fascinating insight into the location of the largest tides in the world.

Before you leave Moncton, drive over to Magnetic Hill where you can put your car into neutral and experience your car being pulled up hill by a magnetic force (it’s actually an optical illusion!). Your destination this evening is over on Prince Edward Island, but you might choose to head north up the New Brunswick coast first, to discover the Kouchibouguac National Park, where you could kayak or hike one of the lovely trails. Or to the port of Shediac where you could take a lobster boat trip. Head over the Northumberland Strait on the Confederation Bridge and arrive in the charming city of Charlottetown.

A day to enjoy the Victorian homes and elegant squares of Charlottetown, the capital of Canada’s smallest province – Prince Edward Island, also widely considered to be Canada’s foodie province. Build up an appetite with a walk to Victoria Park along the waterfront, with pretty pastel-coloured wooden buildings lining the harbour. Charlottetown is the birthplace of the Canada Confederation, where the provinces of New Brunswick, Nova Scotia, Ontario and Quebec met in 1864 to form the new nation of Canada.

Charlottetown to Baddeck (170 on land)

This morning you’re heading to Wood Islands to pick up the ferry to Nova Scotia, across the Northumberland Strait. This ferry can’t be pre-booked and will cost around $120 per car for the crossing which takes just over an hour. You’re then going to drive up to Cape Breton Island in the north east of Nova Scotia. It’s a beautiful route, taking you through the vast Bras d’Or Lake region. Check into your Baddeck hotel for a two night stay.

Today drive the stunning Cabot Trail into the highlands of northern Cape Breton. The trail runs past lochs and glens settled by Scottish Highlanders and along scenic coastlines settled by Acadians. Meander through the Cape Breton Highlands National Park enjoying the stunning vistas of steep cliffs and tranquil beaches. There are some beautiful hiking trails to follow, such as the Skyline Trail where there are over 200 species of birds and you may even spot a moose.

Take the scenic ferry from North Sydney Nova Scotia to Port-aux-Basques in Newfoundland. It’s around a 6 hour trip so you can choose to book a day cabin (ferry included, cabin at extra charge). Wrap up warm so that you can spend time on deck to watch out for whales, dolphins, puffins and other marine life. Your home for the next two nights is Corner Brook, a great base for hiking the nature trails.

Explore the Gros Morne National Park, a World Heritage Site due to its glacier-formed mountains. Perhaps hike the trails to the summit of Gros Morne Mountain for the sweeping views of the towering cliffs and steep fjords, watching for the abundant wildlife such as Arctic hare, caribou and lynx. There is a boat tour from Norris Point in the Gros Morne National Park which is a great 2 hour excursion that we could book for you. With expert and entertaining commentary throughout, you will have the opportunity to view and photograph eagles, moose, whales, seabirds and so more in this incredible setting.

Drive through the wooded landscapes past the historical sites of the mysterious Beothuks who once inhabited the island, and home to moose and black bear.

Arrive in the town of Gander for a two-night stay.

Gander is the birthplace of Canadian aviation, with its airport significant during the Second World War and as a stopping off point for trans-Atlantic flights. It’s role in 9/11 is now immortalised in the award-winning musical “Come from Away”, when it was home to flights temporarily stranded due to the closure of US airspace.

Visit the Terra Nova National Park, a tranquil haven for wildlife, where you will discover deserted beaches and windswept hills. From the shore you should be able to spot minke, pilot and humpback whales. Hike into the marshes and forests of the interior to spot moose and black bears.  Continue to Clarenville for the night.

A scenic drive along the Trans-Canada highway, along Conception Bay where the frequent mist lends a mystical aura to the villages and parkland. Arrive into the capital of Newfoundland and Labrador – St. John’s, where you will find colourful streets set in beautiful surroundings.

Explore St. John’s and the surrounding area. Stroll the historic downtown area, climb the rock of Signal Hill or take one of the beautiful coastal paths. Enjoy the warm hospitality of this lovely little city, sampling the tasty seafood, enjoying locally brewed beer or iceberg vodka and perhaps listening some live music in one of the cosy bars.

Bid farwell to Newfoundland and cross the Avalon Peninsula to catch the ferry back to Nova Scotia. You will be sleeping overnight on this 14 hour ferry trip, and have plenty of time to enjoy the crossing, spotting marine life and taking some final photos.

Disembark in North Sydney Nova Scotia around 10am this morning and then drive to the airport for your flight home.