A superb self-drive itinerary to experience the contrasting cultures of French Quebec and the Atlantic Canada, combining a discovery of the historic beginnings of Canada, the Quebecois art and culture and the beautiful national parks and coastal vistas of the Maritimes provinces. The St. Lawrence Seaway dominates the view as the route travels into the heart of Acadia and its mix of French, Native and Scottish ancestry that perfectly complements the lobster-laden inlets of the Northumberland Strait and the magnificently stark wilderness of the Cape Breton Highlands. (JV) 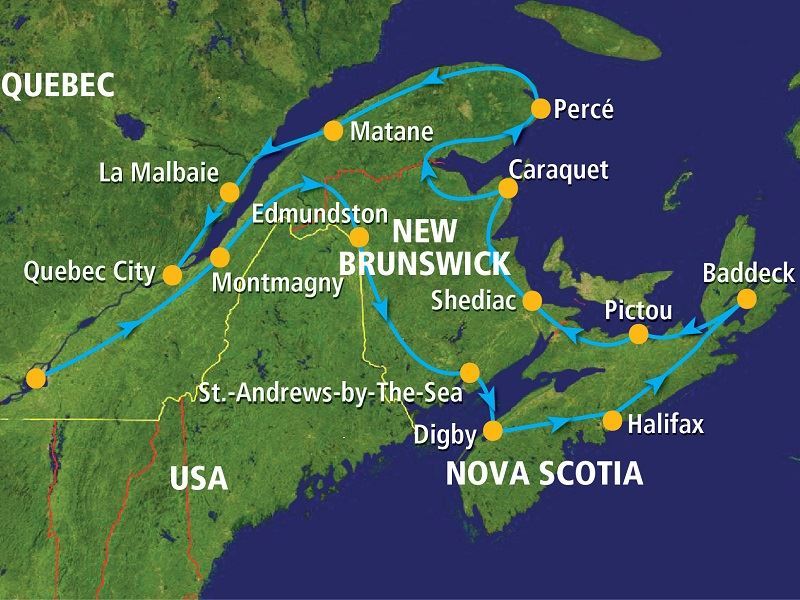 Arrive at Montreal Trudeau International Airport and transfer independently to your downtown hotel. Enjoy an evening exploring this city and perhaps relax over dinner in the charming Vielle Ville. If you would like extra time in Montreal then we can extend this itinerary either at the beginning or the end.

Leave the city of Montreal travelling along the east bank of the St Lawrence River. We suggest a stop on the way at Cap-de-la-Madeleine, Canada's national shrine to the Virgin Mary. You may wish to alter your route slightly north to the shore of the river to the bustling town of Trois-Rivières. Stop for lunch, or perhaps visit the Museum of Quebec Folk Arts and Traditions to see excellent examples of period wood carving, tapestries and other fascinating artwork that tells the story of the region’s people and cultures.

The towns and villages such as Riviere-du-Loup and Saint Pascale have grown up along the banks of the river and reflect a complex modern history spanning over three centuries. The cultures of these communities are the legacy of both French and English empires during the country’s formative
years. Take your time and perhaps stop at any one of these vibrant towns to experience a true taste of Quebecois culture. Crossing into New Brunswick, arrive in the small, picturesque town of Edmundston for the evening.

Today journey through the central wilds of New Brunswick en route to the southern shores of the province. The central region of New Brunswick contains some of the most pristine wilderness of Eastern Canada. The vast tracks of forests are home to wildlife such as brown and black bears,
moose, wolves and other woodland creatures large and small. Arrive in the seaside village of St. Andrews-by-the-Sea where the rest of the day is free to explore this charming maritime community.

A full day to enjoy one of the regions most beautiful ocean-front destinations, nestled along Passamaquoddy Bay. There is plenty to enjoy here, from local modern and native art galleries, to interactive salmon hatcheries, to a fascinating aquarium delight visitors year round. It is a haven for lovers of seafood with the small restaurants of the village serving up delicious dishes from the daily catches. You could also experience a Marine Wildlife and Whale-watching Tour today, which we can pre-book for you.

This morning take the short journey to Saint John where you independently take a ferry* across the deep blue waters of the Bay of Fundy. Disembark at naturally-sheltered cove settlement of Digby, a Loyalist town dating back to English settlers in the 1780’s. Named after the captain of the first colony
ship, Admiral Robert Digby, you can tour several small museums and historic homes celebrating the town’s establishment.

Crossing the width of Nova Scotia, your route takes you alongside the gates of Kejimkujik National Park and National Historic Site, an idyllic natural oasis of old growth forest surrounding a large inland lake. Continuing on towards the southern coast, pass by Bridgewater on the shores of the La Have River, followed by a drive through the port of Lunenburg, designated a UNESCO World Heritage Site, and its famed seafaring heritage museum, the Fisheries Museum of the Atlantic. On the approaches to Halifax, you follow the southern shores of St. Margaret’s Bay, one of Nova Scotia’s largest natural inlets. This inlet is peaked by the renowned village named, Peggy’s Cove and its iconic whitewashed lighthouse perched on top of an expansive bed of smooth granite rocks. Arrive in the capital city of Halifax for the evening.

Today you drive through the centre of Nova Scotia, passing through the towns of Truro and New Glasgow, celebrating their European heritage. Arrive at the narrows of the ocean and eastern beaches of the Northumberland Strait at the doorstep of the island and the commercial hub of Ports Hawkesbury near the tip of St. Georges Bay. Continue on through gentle rolling fields of the bay area as it transitions into the beautiful Bras d’Or Lake lowlands. Arrive in Baddeck for a two night stay.

With a day free in Baddeck, we suggest a scenic drive along the Cabot Trail into the highlands of northern Cape Breton Island. The trail runs past lochs and glens settled by Scottish Highlanders and along scenic coastlines settled by Acadians. You will meander through the rugged Cape Breton Highlands
National Park, enjoying stunning views of sea-swept headlands, steep cliffs and tranquil beaches. Hiking trails lead into the interior of the park where stunning vistas appear at each turn. Return to Baddeck through the lush Margaree Valley.

Today you have another opportunity to stop and visit the small towns on the route back into New Brunswick. If you didn’t have the chance on your journey east, perhaps now stop for lunch in the small town of Truro, or watch gravity be defied at the Magnetic Hill in Moncton where your car will appear to roll uphill. You could also take a short detour to The Hopewell Rocks on the Bay of Fundy, home of the highest tides in the world. Continue on to Shediac where you might wish to treat yourself to a lobster dinner at one of the local restaurants this evening.

Heading up the coast of New Brunswick you may choose to visit the Irving Eco Center la Dune de Bouctouche, preserving and restoring one of the few remaining great sand dunes on the north-eastern coastline of North America. Alternatively, you may wish to consider stopping at the Kouchibouguac National Park visitor centre for an interactive presentation of the wide variety of forests, marshes and lagoons indicative of the Maritime Plain ecosystem. Continue on to Caraquet where the remainder of the day is yours to explore this pleasant waterside community of the shores of Chaleur Bay.

Today the road follows the southern shores of the Baie des Chaleurs and the original lands of the Acadian people who were among those expelled from Nova Scotia and New Brunswick in 1760. Passing through seaside resort town of Bonaventure, you may wish to visit the Acadian Historical Museum of Quebec, featuring the art and cultural artifacts of that displaced community. Crossing the provincial border back into Quebec, you arrive in Perce for a two night stay. Overlooking the waters of the river, this commercial centre of the Gaspe Peninsula marks where Jacques Cartier first took possession of the land for France in 1534.

Once the largest fishing port in the Gaspe Peninsula, Perce is now the gem of the entire Gaspe region renowned for the extraordinary beauty of its surroundings. Its prominent geological feature is a great rock pierced with a hole, from which the community derived its name. The town has a delightful selection of restaurants and cafes, some of the best in the region as well as a summer theatre programme and a boardwalk that stretches along the south beach. At the wharf you can watch the fishermen cleaning their daily catch.

Passing by the wide headwaters of the Gulf of St. Lawrence, you begin to follow the river of the same name as its waters flow by out to sea. Perhaps divert inland a short distance for a pleasant drive or short outing in Parc de la Gaspesie – one of the most beautiful and accessible protected lands in eastern Canada. Continue on to pass through the lush and historic farmlands of Sainte-Anne-des-Monts, one of the first and most prominent early Catholic churches in the New World. Although most of the original building has been destroyed by subsequent fires over the last 150 years, it has been immaculately restored and is an unforgettable sight for all visitors. Arrive in Matane where the rest of the day is at leisure to discover the charms of this francophone town.

This morning you board the ferry in Matane and cross the wide waters of the St. Lawrence to Baie-Comeau. During your sailing, you may see some of the Great Lakes shipping vessels that continue to use the waterway as a viable transportation route for heavy goods into the interior Great Lakes. Upon debarking at Baie-Comeau, the scenic north shore of the river offers a day of discovery through picture-perfect waterside towns. Les Escoumins is considered one of the most beautiful villages of the Haute-Côte-Nord region, located along the riverside at the gate to the Parc Marin du Saguenay. During the summer months, whales may be glimpsed from the shores of the village on their migratory or feeding routes.

Today as you travel into the heart of Quebec, you are retracing the route of early European explores as they pushed into the interior along inter-tribal trade and hunting routes used by the First Nations peoples for thousands of years. Furthermore, the towns and villages such as Beaupre, Baie-St-Paul and Saint- Simeon that have grown up along the banks of the river reflect a comparatively recent 300-year history of both French and English empires, leaving their mark on the architecture and the local cultures. As the river narrows, the spires and fortifications of Quebec City come into view, quickly dominating the riverside landscape.

This morning you will enjoy an orientation guided tour of historic and modern Quebec City. The cobblestone streets still resonate with the long histories of French and English empires that formed the foundation of Canada. The walled city is one of the finest examples of a colonial fortified
city in the world. On this guided tour, you will see the Latin Quarter, the Plains of Abraham, the Citadel, the Fortifications, the National Assembly, Place Royale, the Basilica and other points of interest within Quebec City. The remainder of the day is free to independently explore the sights of
sounds of the city. There is a superb choice of restaurants offering a wide range of food, and in particular some very special fine dining establishments.

Today you have the choice of flying home from Quebec City Jean Lesage International Airport, or driving back to Montreal for more time to explore the city and then fly home from there.

What's not included (unless otherwise stated)