Top 10 things to do in Ontario

We love Ontario for its blend of great cities and glorious outdoors. You can combine natural splendours with fun city attractions, top-notch museums with world-class wineries, and the Great Lakes with one of the Wonders of the World. Here are our Top 10 favourite things to do in the province. 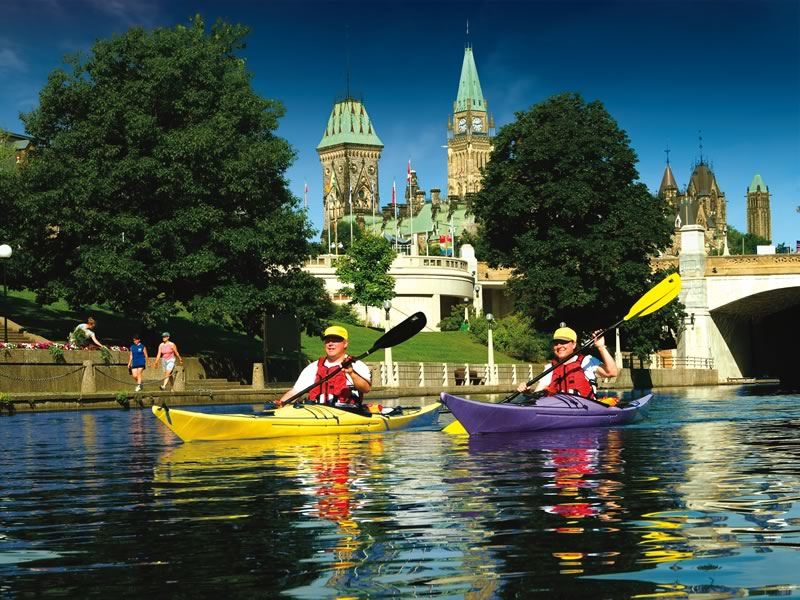 Where: On 301 Front St W in the heart of downtown Toronto.

What: What looks like a giant hypodermic needle piercing the Toronto skyline is CN Tower - the tallest structure in the Americas and the third-tallest freestanding tower in the world at 1,815 feet. Classified as one of the Seven Wonders of the Modern World by the American Society of Civil Engineers, what functions as a telecommunications hub is home to five unique attractions. There’s also three dining spaces - the coolest of which is the revolving restaurant 360 that has a huge European-style ‘cellar in the sky’ with a 9,000-bottle storage capacity.

Highlights: While the SkyPod and even higher LookOut Level offer cracking views, the EdgeWalk takes things to another level. It’s Toronto’s most extreme urban attraction, where the very brave get to take a hands-free walk on the 150-metres-long and 1.5-metres-wide outside ledge that encircles the top of the Tower’s main pod. Thankfully, you’ll be attached to an overhead safety rail via a trolley and harness system.

Suggested Holiday: Many of our holidays to Eastern Canada begin or end in Toronto so you’re spoilt for choice.  If you’re after a few days dedicated to Toronto then check out our hotel suggestions here Toronto Hotels 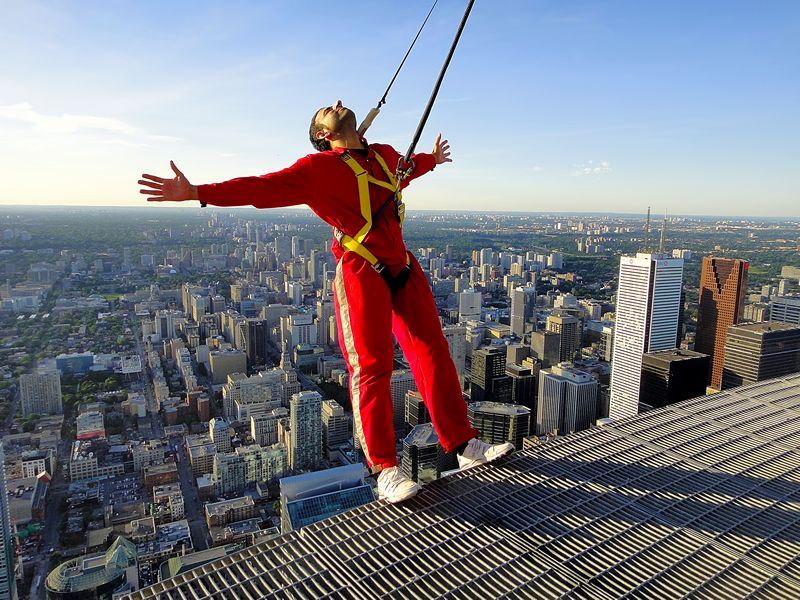 9. Get your skates on at the UNESCO Rideau Canal
Where: Winding its way from Ottawa South to Kingston Harbour on Lake Ontario.

What:  It’s all twists and twirls at the Rideau Canal in the wintertime when this iconic waterway turns into the world’s largest naturally frozen ice rink.  Open for 24-hours a day between January and late-February (weather depending), the nearly five-mile-long Skateway begins just steps from Canada’s Parliament Buildings and extends to Dows Lake, just north of Hog's Back Falls. Skating is free and there’s rental outlets galore for skates, sleighs and safety helmets.

Highlights: As you attempt to glide along the ice with the greatest of ease, keep your eyes peeled for the Skateway’s heated log cabins where you can stop to tie your laces, get your blades sharpened, or just warm up. Equally worthy of your attention are the food kiosks selling hot chocolate, apple cider, hot dogs, and beaver tails - the delicious, deep-fried and sugary pastries with cinnamon or other sweet toppings. There’s also picnic tables at various points along the way, as well as skate patrollers, ice safety workers and first aiders. 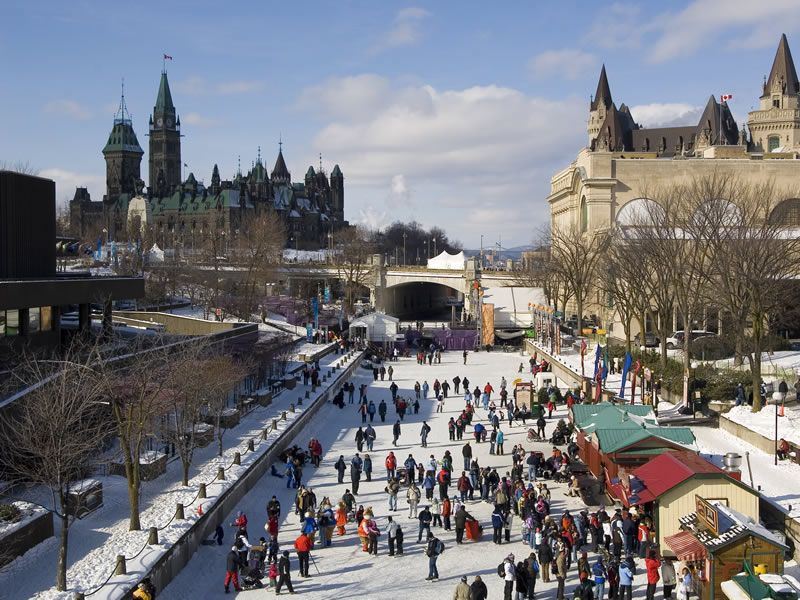 8. Discover the National Parks and Provincial Parks near the Great Lakes

Where: Ontario borders run through four of the five Great Lakes – Lakes Ontario, Superior, Huron and Erie – the location of several national and provincial parks.

What: Georgian Bay on Lake Huron is home to some beautiful provincial and national parks – each with their own unique attractions.  French River Provincial Park is fabulous for kayaking and fishing, whilst Killbear is popular with families with its beaches and shallow waters. Bruce Peninsula National Park and the Marine Park of Fathom Five are located just outside of Tobermory, where hiking and swimming opportunities are too good to miss. Fathom Five is the site of more than a dozen shipwrecks and with its extraordinarily clear water, is a favourite hot spot for divers and glass-bottom boat tours.

Highlights: Killarney Provincial Park is one of the true gems of the province. La Cloche Mountain Range is made of white quarzite and the bright white of the rocks contrasts stunningly with the green hues of its forests and the azure blue water of its lakes. There are also beautiful pink granite cliffs plunging into some of the lakes, giving this landscape a truly unique colour palate, which has been immortalised in paintings by the Group of Seven. 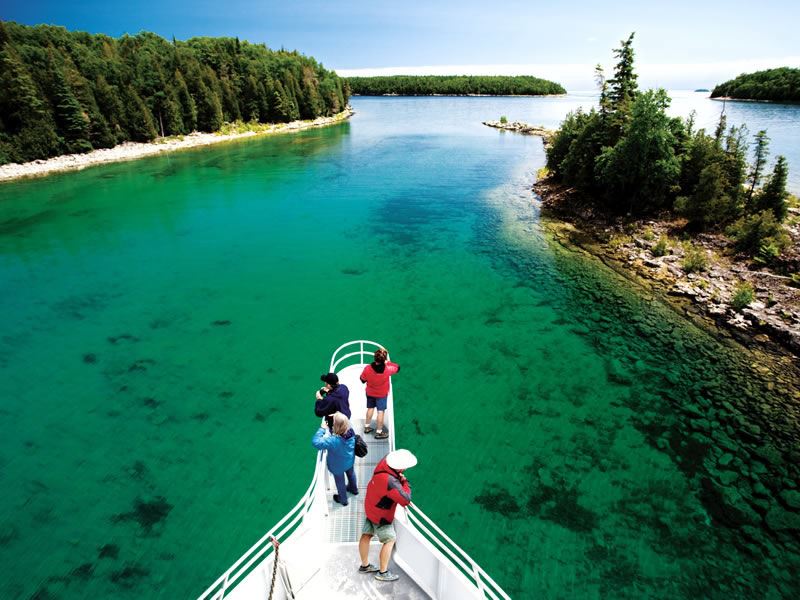 What: The home of the Parliament of Canada, the Hill is an area of Crown land located on a 170-foot bluff on the southern banks of the Ottawa River. There are three Gothic buildings that top the hill and hold the House of Commons, the Senate and the offices of the members of Parliament.

Highlights: The Hill is a lovely place to stroll and enjoy the views. It’s unusual to be able to have a quiet and relaxing time around such a centre of power – just think of Parliament Square in London and the Capitol in DC. Slow down your pace, pick a spot, and sit down to enjoy the vistas Ottawa-style.

Note: Parliament Hill is undergoing a 10 year long refurbishment, as this evolves there may be restrictions to access of some buildings. 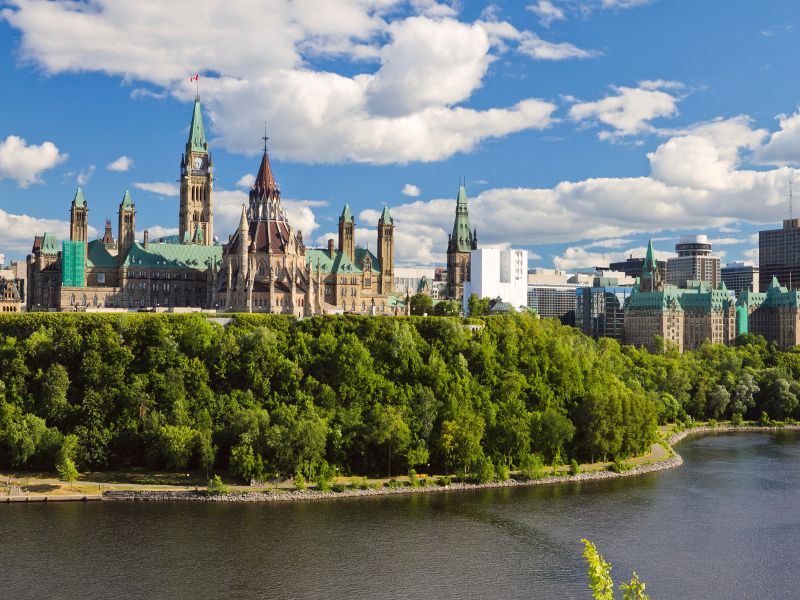 Highlights: Niagara-on-the-Lake gets all the glory for its pristine selection of large estates, medium–size operations, and small boutique wineries. Most have tasting rooms where you can sample rare vintages, special reserves, new releases and small batch specialties; others tempt with wine-education seminars, hands-on activities, and behind-the-scenes tours. Some of the best places to sip on Canadian wines here include Inniskillin, Wayne Gretzky’s,, Reif Estate Winery, Peller Estates Winery, Jackson-Triggs Winery, Ravine Winery and Chateau des Charmes. 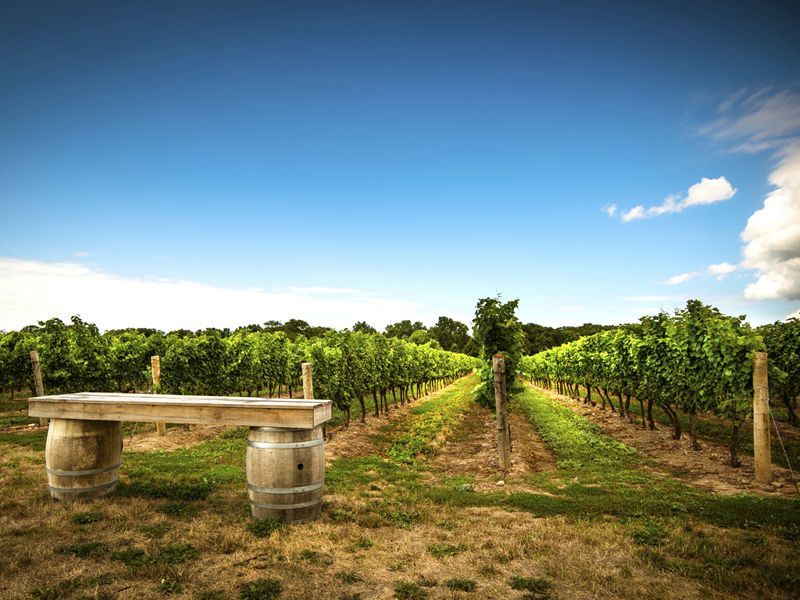 5. Explore the vast network of rivers and lakes in Algonquin Provincial Park

Where: In central Ontario, around three hours north of Toronto or three hours east of Ottawa.
What: For those keen to get back to nature, this sprawling 7,800-square-mile outdoor playground lures with a sublime landscape of maple hills, rocky ridges, valleys, forests, rocky bluffs, and deep crystalline lakes. The lakes and forests are home to a fascinating array of wildlife and provide wonderful opportunities for outdoor adventures.

Highlights: Depending on the time of year, biking, fishing, cross-country skiing, snowmobiling, swimming, snowshoe hikes and guided hikes are available. But what's most fabulous about this protected slice of Canadian wilderness is the vast web of waterways, easily navigable by canoe or kayak. While paddling, keep your eyes peeled for the incredible wildlife; there’s over 130 types of breeding birds as well as bears, wolves, moose, beavers, hares, moles, chipmunks, shrews, foxes, skunks, and more. 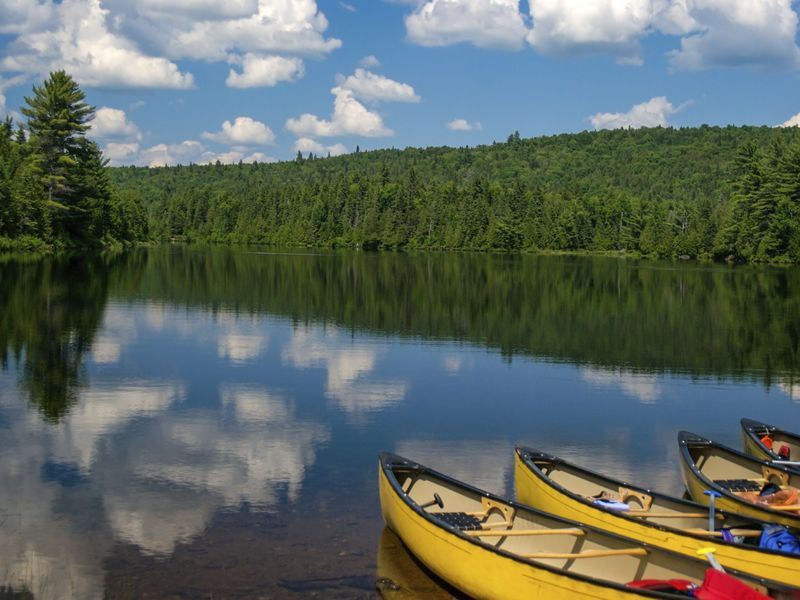 4. . Get your culture fix at the Royal Ontario Museum

Where: At 100 Queens Park in the heart of downtown Toronto.

What: Since its 1914 opening, the ROM has revealed crucial works by key period designers. Nowadays it’s Canada’s largest museum housing six million artefacts in its collections and 40 galleries dedicated to the natural world and world cultures. On arrival, it’s impossible not to be wowed by Polish-American architect Daniel Libeskind's glass and aluminium-clad extension wing that was added onto the original heritage buildings in 2007.

Highlights: Must-sees include the Egyptian sarcophagus of the Djedmaatesankh mummy dating back to around 850 BC, the Allosaur Dinosaur skeletons, and the cedar crest poles carved by First Nations tribes. Fashionistas will adore the Patricia Harris Gallery of Textiles & Costume on level four, while those with an interest in Chinese art will be blown away by the tomb of the Ming Dynasty and the spectacular temple sculptures. 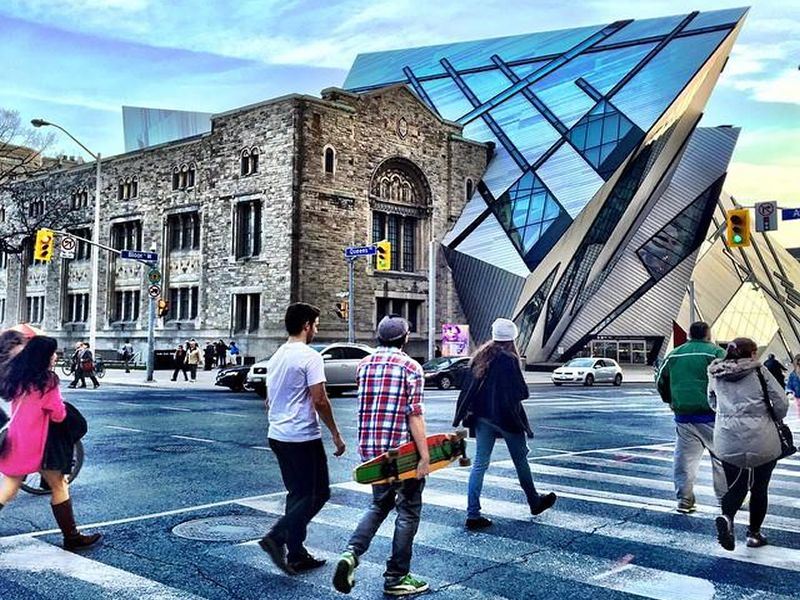 Where: In the St Lawrence River, near Lake Ontario Eastern end, bordering Southeastern Ontario and New York State (US)

What: A spellbinding archipelago dotted with exactly 1,864 tree-filled islands, the Thousand Islands (also 1,000 Islands) is the archipelago that spans both banks of the St. Lawrence River. Once known by the indigenous population as Monatoana (meaning Garden of the Great Spirit), it’s a nature-lover’s paradise fuelled by endless shorelines, green forests and unique cultures; from the large Wolfe Island right down to the tiniest of the chain known as Just Room Enough Island.

Highlights: Must-dos include booking a river cruise or chartering a fishing boat, visiting Boldt Castle on Heart Island , marvelling at over 300 restored boats at the Antique Boat Museum (US), climb the 1000 Island Tower for some breathtaking views or enjoy a helicopter ride over the area. If you want to explore the region at a slower pace, there are kayak or bicycle rentals on offer. Quaint towns, beautiful farms, scenic views and landscapes dot this rural area.

Suggested Holiday: How about an escorted tour such as this one with an itinerary including a cruise around the Thousand Islands - Eastern Explorer 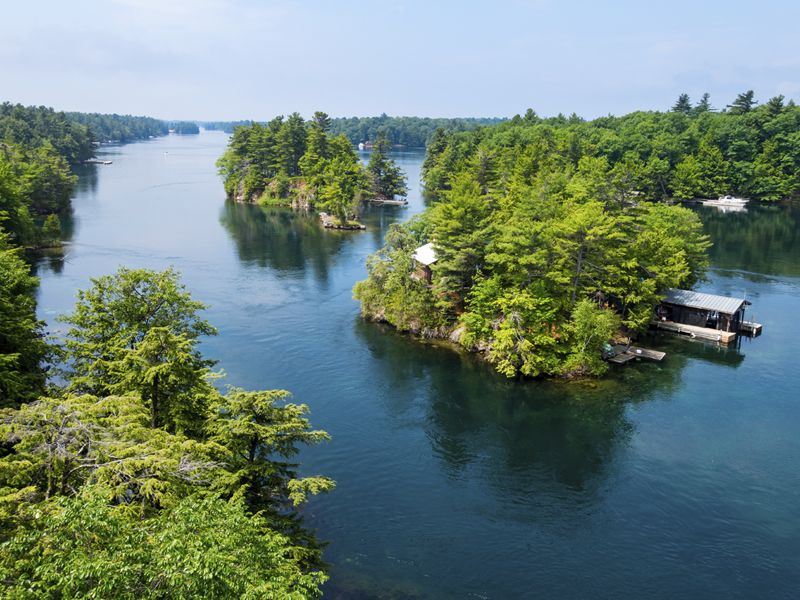 2. Relax in Muskoka and Cottage Country

Where: Extending from Georgian Bay to the tip of Lake Couchiching in the south to the western border of Algonquin Provincial Park, the region of Muskoka is approximately 2 hours drive from Toronto.

What: It’s proximity to Toronto makes Muskoka a popular region for city-dwellers looking for peace and relaxation, and the moniker “Cottage Country” refers to the preponderance of vacation homes in the area. It really is a glorious part of the world, home to 1,600 lakes, thousands of acres of green forests and delightful settlements with charming hostelries.

Highlights: It’s simple – find a resort on a lake and then enjoy swimming, boating, paddling, canoeing, sunbathing, fishing, hiking or just sit back and enjoy the serene views. We love the Deerhurst Resort set in 780 acres, with a variety of accommodation, restaurants and myriad activities. 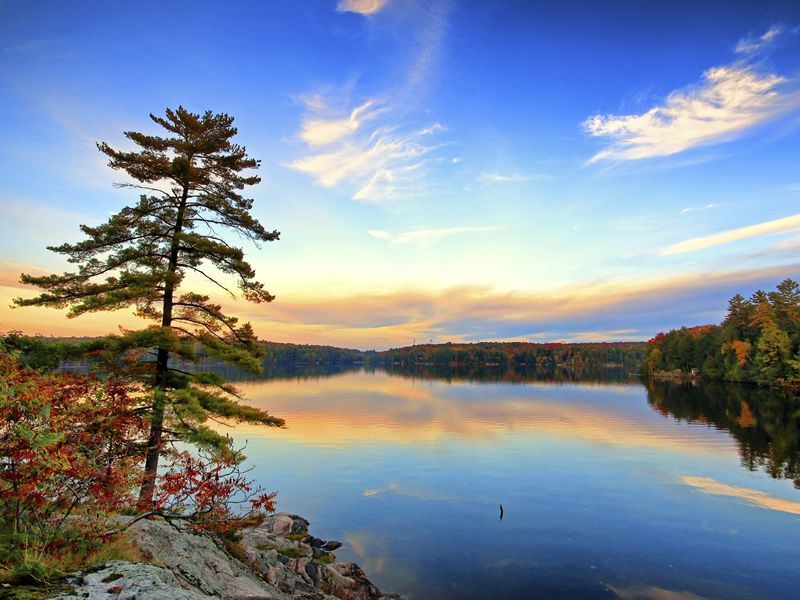 What: The spectacle that is Niagara Falls never fails to amaze. Made up of three separate parts - American Falls, Bridal Veil Falls, and Canadian Falls  - the largest of the three falls, also known as Horseshoe Falls. They move a staggering three-quarters of a million gallons of water per second over a 167-foot-drop. And while the visuals are mind-blowing from the Niagara Sky Wheel, Niagara Zip Lines, Skylon Tower or Journey Behind the Falls and its tunnels, nothing beats the awe-inspiring sights by air or boat.

Highlights: No trip to the Falls is complete without a cruise right up to the thundering waters onboard Niagara City Cruises (formally Hornblower Cruises). And budget permitting a flight over the Falls in a helicopter will be on your wish-list. Insider Tip - Treat yourself to a Fallsview Room and enjoy the Falls light up at night. 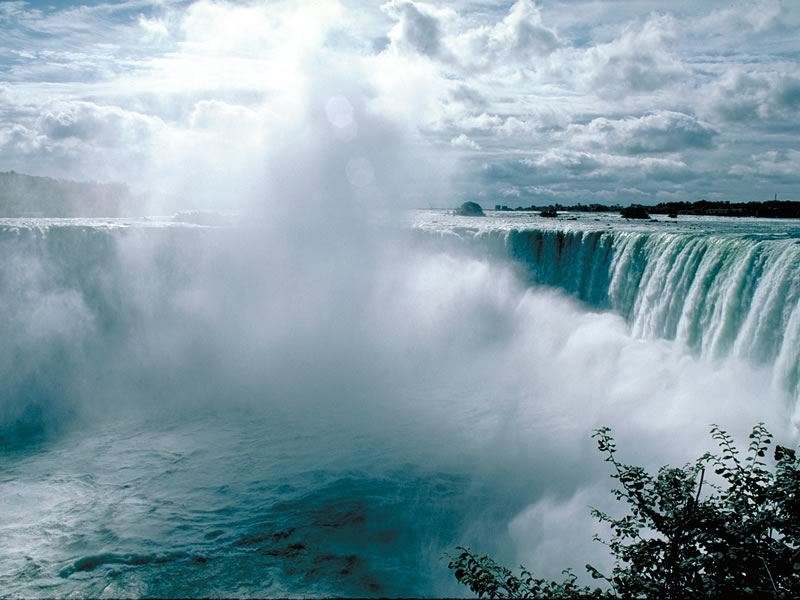