The province of Manitoba is slap bang in the centre of Canada and this, coupled with the warmth and friendliness of its inhabitants, allows their strapline “Canada’s Heart Beats” to ring true.

It is a province of spectacular open spaces and deep cultural roots. Here are our pick of the unique experiences and beautiful places you can visit in Manitoba.

We’ll start with the capital – Winnipeg. Now the largest city on the Canadian Prairies, Winnipeg has historically been central to Indigenous gatherings, the fur trade, the railway, the grain exchange and now has evolved into a city known for its aerospace, technology and creative industries. We love this eclectic city, filled with fascinating museums and galleries, beautiful public spaces and a wonderful selection of hotels and restaurants to add to the enjoyment of your holiday. 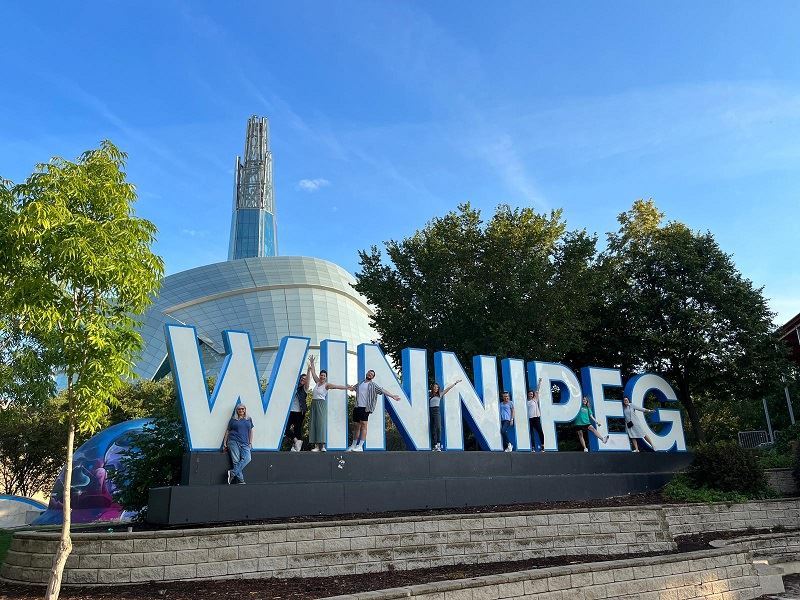 Combining all of these things is The Forks National Historic Site. This nine-acre riverside park encompasses interpretive exhibits showing the 6,000 year history of this site plus walking trails and a native prairie garden. You’ll also find a comfortable and stylish hotel – The Inn at the Forks, and numerous eateries and bars to try out, and a great selection of independent boutiques and stores in the marketplace. 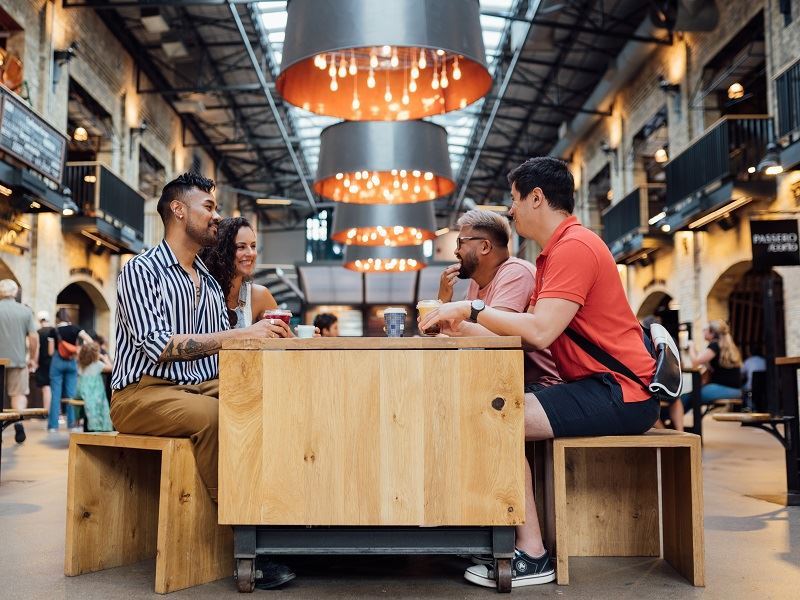 From here you can walk to the spectacular building which houses the Canadian Museum for Human Rights. The architecture and design of this place is a draw in itself, but you’ll also become enthralled with the galleries built around human rights themes. Superb exhibits using art, storytelling and the latest technologies will keep you absorbed for hours and you will leave with a greater understanding of the importance of rights for all. 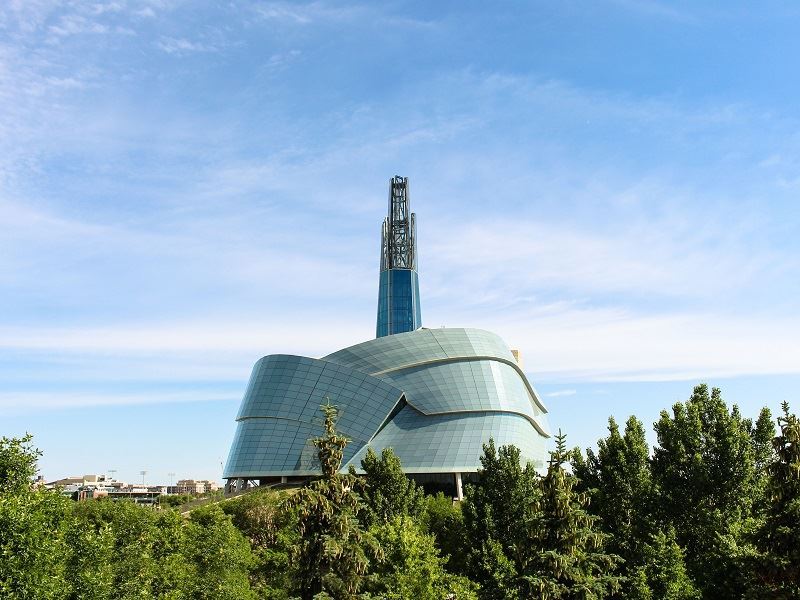 Another architecturally striking building is the Royal Canadian Mint. You can take a 45-minute tour and discover where all the coins in circulation in Canada are made with a bird’s eye view of the production floor. You will also learn about their record breaking “Million Dollar Coin” and see the 2010 Vancouver Olympic medals. 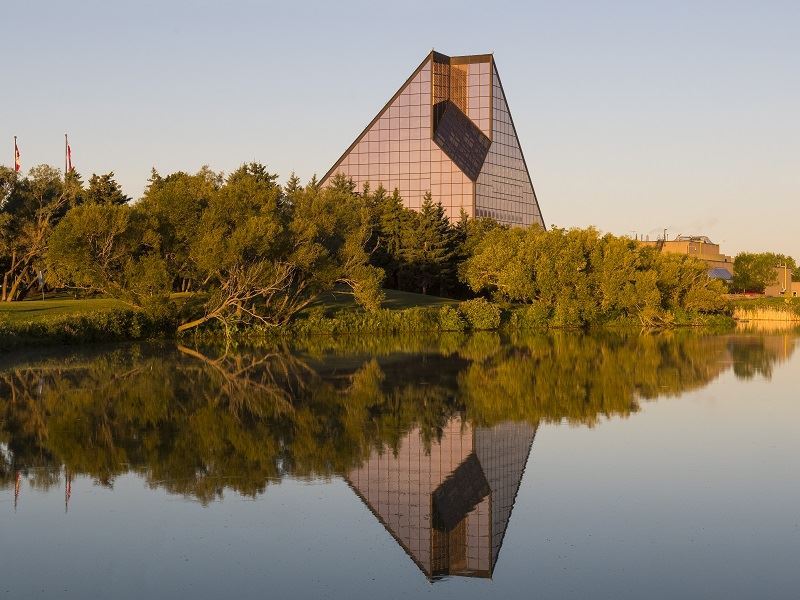 Even if you’re not an art-buff, the Winnipeg Art Gallery is worth a visit for the Qaumajuq – the Inuit art centre containing thousands of Inuit carvings displayed in a striking three storey glass “Visible Vault”.  It’s a mesmerising display and you can learn more about the stories behind these works from a series of videos, sound recordings and photographs.

Qaumajuq at the Winnipeg Art Gallery 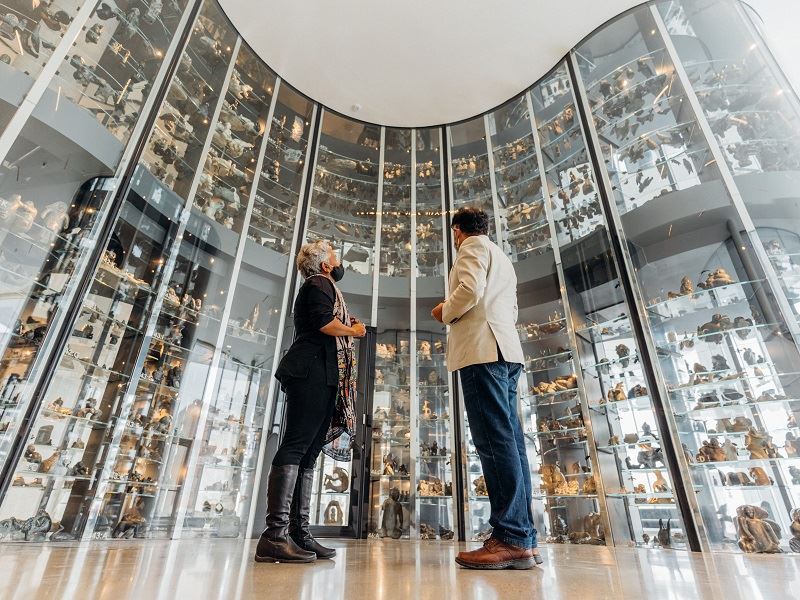 The Historic Exchange District is another National Historic Site of Canada, but again, there are no stuffy museums or dull displays here. The exceptional collection of heritage buildings built between 1880 and 1920 also happen to be one of the most vibrant neighbourhoods in Winnipeg. Nicknamed the “Chicago of the North”, the Exchange features massive stone and brick warehouses, elegant terracotta-clad buildings, narrow angled streets as well as cobblestone paths and alleyways. This architecture provides a beautiful backdrop for local restaurants, boutique shops, art galleries and museums.

Great shops and cafes in the Exchange District such as the Across the Board Café, Credit: JP Media Works, Travel Manitoba 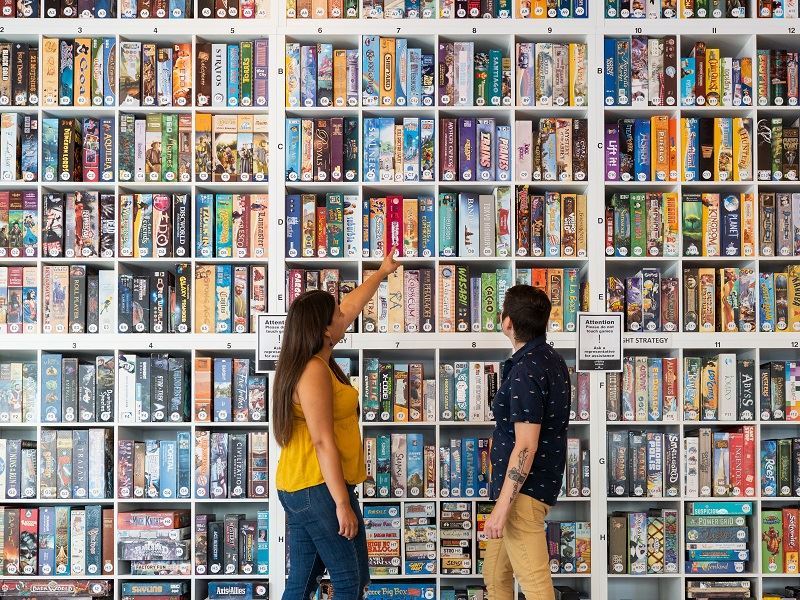 The Manitoba Legislative Building is a hundred year old neo-classical building with its dome topped with the “Golden Boy” statue symbolising the sprit of progress. You can do a self-tour of the building and even watch the Legislative Assembly from the Visitor’s Gallery if it is in session during your visit.
No visit to Winnipeg is complete without a visit to Assiniboine Park. If the weather is good, then there are beautiful gardens to stroll, and opening towards the end of 2022 is “The Leaf” – another of Winnipegs stunning buildings, this time housing a series of botanical gardens which look all set to become a key attraction. You’ll also find “The Journey to Churchill” which is part of the Assiniboine Park Conservancy and is home to several polar bears rescued as orphans from Churchill in the north of the province. 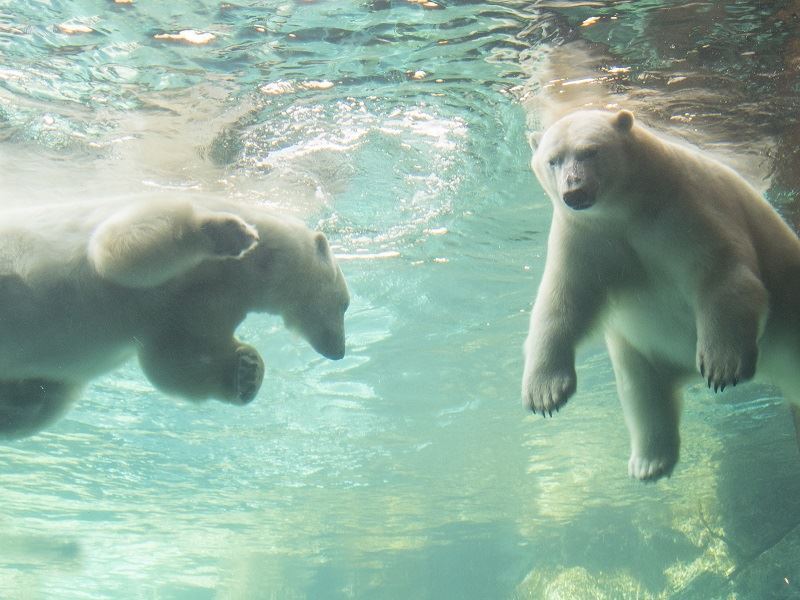 Now it’s time to introduce the people of Manitoba. The province is located on the ancestral land of the Anishinaabeg, Anishininewuk, Dakota Oyate, Denesuline and Nehethowuk Nations and is the Homeland of the Red River Métis, with Northern Manitoba including lands that were and are the ancestral lands of the Inuit. It’s fascinating to learn about these indigenous people and their history. Louis Riel is an intriguing historical figure but not well known outside of Manitoba or Canada.  Born in Winnipeg he became leader of the Metis people and then the leader of the provisional government, negotiating Manitoba’s entrance into the Canadian confederation in 1870. But Riel was a controversial character and it wasn’t until March 1992 that the Canadian government officially recognised Louis Riel as the founder of Manitoba, making him one of the Fathers of Confederation. 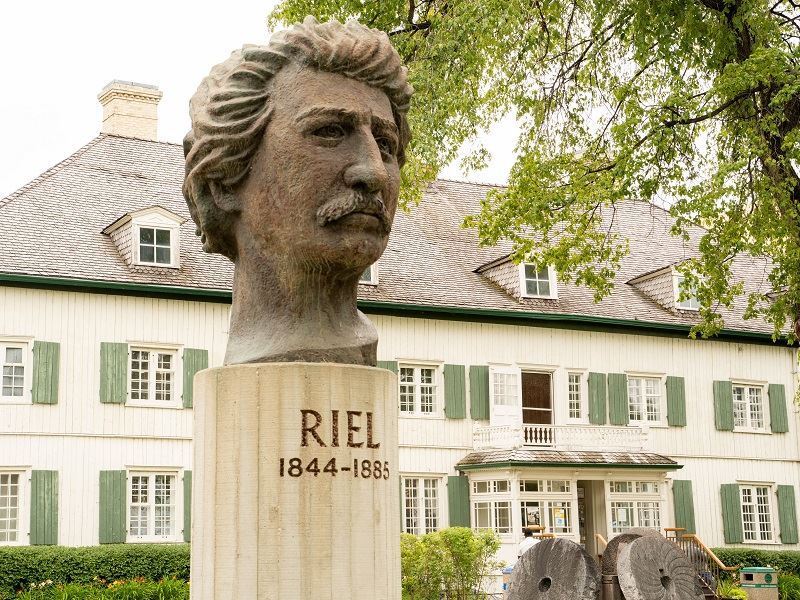 Heading north west through the province you’ll reach the Riding Mountain National Park which is beautifully scenic but also a lively centre for all sorts of recreation and relaxation. The lovely townsite of Wasagaming is reminiscent of a smaller and more laid-back Banff. It’s located on Clear Lake where you can swim, paddleboard and kayak, cycle around and cruise along. Accommodation is to be found in a handful of cosy lodge-style hotels, and there’s a nice choice of restaurants and cafes. The park is also a great place for wildlife spotting, and here you can see black bear, bison, moose and beaver. 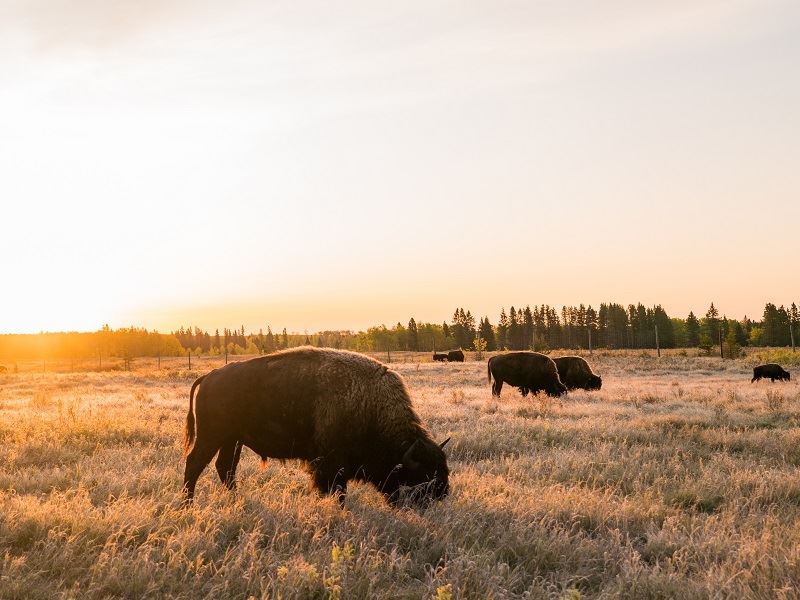 Now it’s up to the northern reaches of Manitoba and Canada’s most northern port – Churchill. There are no roads to Churchill so it’s either a two-hour flight from Winnipeg…or a two-day/two-night rail journey. It’s known as the Polar Bear Capital of the World, and indeed this is the biggest draw to this remote community. The main polar bear season is October and November because this is the time that the bears are gathering on the shores of the Hudson Bay before the big freeze allows them to travel out onto the ice to hunt for seal. You’ll be taken in a huge tundra vehicle onto the tundra for once-in-a-lifetime sighting of these magnificent creatures. 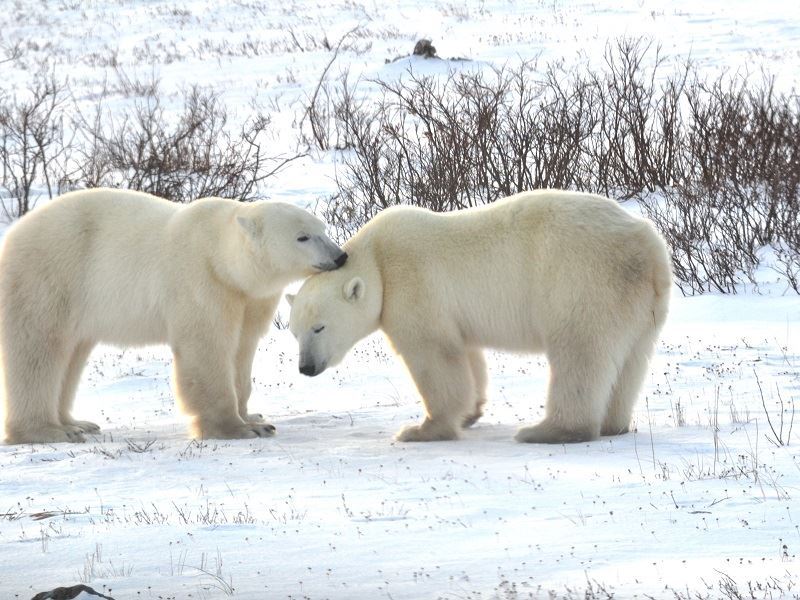 If you visit Churchill in July and August you may also spot them snoozing on the rocks in the distance, but the real attraction in the summer are the thousands of beluga whales that gather in the Churchill River Estuary to mate, birth and feed. They are highly social creatures and travel in large “pods”. They’re also naturally curious and so are a wonderful reason to take a boat trip as they will swim close by to see what’s going on and spend much of the time just beneath the surface of the water so are easy to spot and beautiful to see. The Northern Lights are another great reason to visit Churchill, and being so far north you’ve got a good chance of seeing them when darkness falls at any time of year. But in February and March you are (almost) guaranteed a sighting and there are some great tours which incorporate several hours a night watching this stunning celestial phenomenon.

The Northern Lights in March in Churchill, Credit: Travel Manitoba 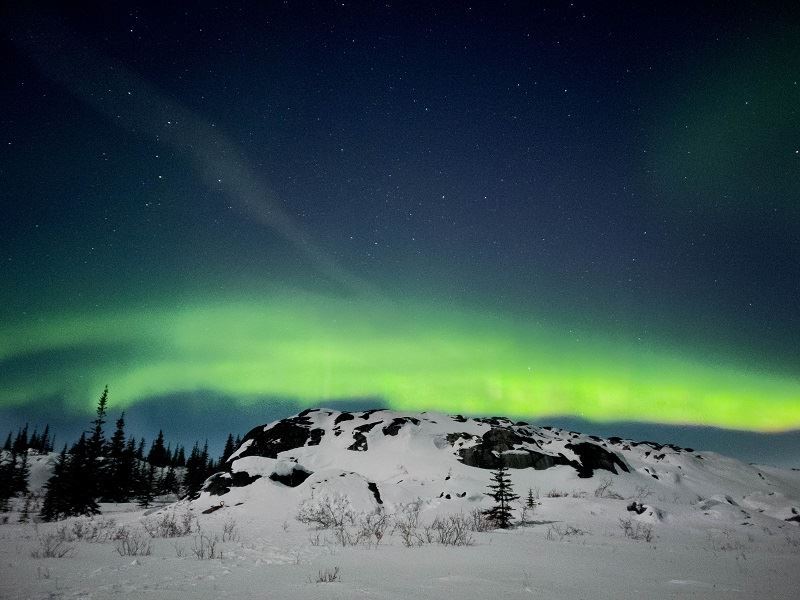