Top 10 things to do in Toronto

The city of Toronto is pretty much dominated by the northern shoreline of Lake Ontario and the natural harbour has long been used as a commercial port and for recreational sailing. If you’re looking to explore the Toronto Islands, which lie just offshore, there’s a good public ferry service that leaves from the central waterfront and there are also plenty of water taxis if you don’t fancy the wait.

Aside from the lake-based activities, Toronto promises loads of opportunities to: shop, learn and have fun so, if you’re looking for a few more excuses, check out the Toronto's top 10 list below that will walk you through Canada’s largest city’s highlights. 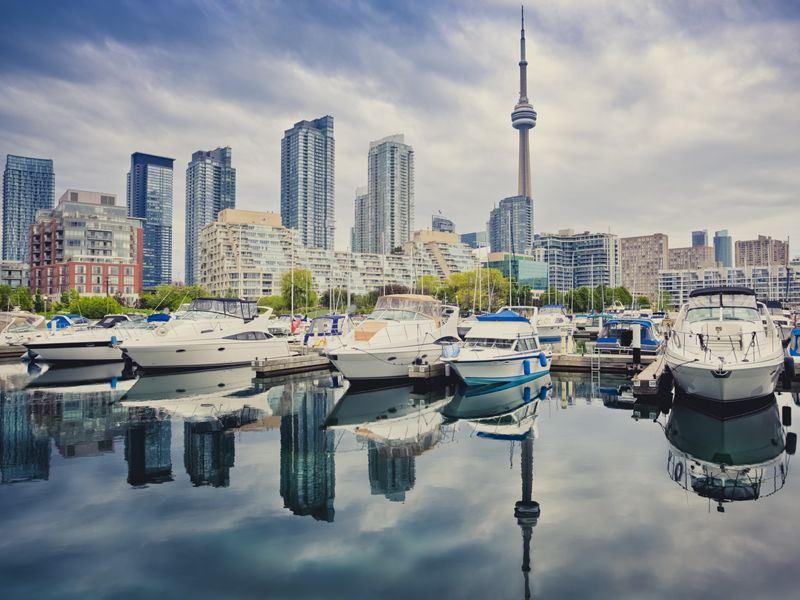 First stop for all shop ‘til you drop lovers has to be the Eaton Centre which features over 250 outlets and is ranked as the third largest mall in the entire country. Aside from the Eaton there are plenty of other pockets of retail therapy available with Queen Street, Chinatown and Yonge & Eglington all offering the perfect means from where to spend a few hours as well as a few Canadian dollars. Toronto has an excellent blend of boutique, mall and funky thrift shops and, with all those cafes and restaurants thrown in, you can’t go far wrong.

Gay-friendly, chilled-out, sophisticated and trendy, Toronto’s club scene typifies the city’s reputation as a cosmopolitan and contemporary hub. The key areas include: King West, College Street and Yorkville Avenue with plenty of choice no matter what you’re into. Mansion, Musik, This is London and Maro are all well-worth an evening out and if you fancy making shapes ‘till dawn to the electronic sounds of visiting superstar DJs then head to Guvernment on Queen’s Quay for an awesome experience that ranks up there with the best of them.

If you’re looking for all the rides, slides and thrills of a theme park then Wonderland covers all bases and then some. Located in Vaughan, a city just to the north of Toronto, this is a cracking place to visit with kids and there are loads of different areas to keep everybody happy. The park is split across seven separate zones featuring everything from action and adventure to Medieval Europe and Charlie Brown. With 16 roller-coasters, 2 water slides and just under 70 rides in total, this is an awesome alternative to city sightseeing.

Commonly known as simply ‘the Shoe’, this is a characterful live music venue that’s been knocking out the crowds since way back in the 50’s. Situated on Queen’s Street, in the downtown district, it’s not hard to find and ask any passing local and they’ll surely be able to point you in the right direction. The Tavern is undoubtedly sewn into the tapestry of Toronto music culture and in the past has featured every rock &amp; roll hybrid going from blues, folk and reggae to ska, swing and punk. Notable performers include: the Rolling Stones, the Ramones and the Police so you know what to expect if you fancy a great night out.

This is much more than just another place to buy fruit and vegetables, Kensington Market is a way of life and if you’re wishing to discover the very essence of Toronto’s diverse ethnic spirit then look no further than this downtown neighbourhood. The market community is fiercely proud of its independent counterculture status and you’ll instantly understand what it is to be a local if you fancy popping into any one of the cafes and boutique stores that have been in residence for generations. No matter what you fancy: browsing for bargains, people watching or discovering a genuine piece of Toronto’s heritage, Kensington Market is a great place to spend a lazy Sunday morning.

Featuring over 700 acres of well-maintained parkland, this is the country’s largest zoo and an absolute must if you’re travelling with kids or just fancy passing the day with some of the locals. Split into 7 different regions you’ll be led through African, Australasian and indigenous Canadian habitats that are home to more than 500 different species. Aside from the animal stars, which include: rhinos, tigers, elephants, monkeys, polar bears and red pandas, Toronto Zoo offers plenty of interactive fun for all the family with Splash Island always popular during the summer months.

Thanks to Toronto’s leaning towards the arts, concert venues such as Massey Hall, in the Garden District, provide a real treat for lovers of live performance and if you’re into your jazz then you’ll already know the building’s importance on the world stage. This is a huge theatre and seats up to 2,750 people without too much trouble and if you’re hoping to catch a performance then you’ll find an eclectic blend of rock, country and jazz gigs taking place throughout the calendar year.

As you’ll probably gather after just a few moments in the city, ice hockey and Toronto go together like maple syrup and pancake stacks but if you really want to get under the skin of this all-time Canadian obsession then a visit to the Hockey Hall of Fame is an obvious place to start. Located on Yonge Street, in the downtown district, you’ll be treated to 15 separate areas dedicated to the sport with more pucks, sticks and battered face masks than you’ll know what to do with. From legends of the game such as Wayne Gretsky and Mario Lemieux to some of the fiercest rivalries on the planet, this is where you discover what makes a true blue Canadian get all hot under the collar.

As mentioned in our bucket list article ‘Hang from Toronto’s CN Tower’, this colossal structure is the tallest of its kind in the west and has become an iconic image of not only Toronto but of Canada too. Standing at almost 2,000 feet tall there’s no escaping its distinctive looking spiky features and if you fancy viewing the city from the main pod then prepare for a jaw-dropping photo opportunity. Of course, if you want to take it just that little bit further then perhaps you’ll be more inclined to take on the Edge Walk? Entirely up to you.

If you’ve made the journey to the top of the CN Tower then you’ll no doubt have been attracted to the islands of the bay which lie to the west of Lake Ontario and are easily accessible from the city’s waterfront terminal. These car-free pockets of natural beauty are fantastic for exploring and getting out of the city with plenty of beaches, woodlands and lakeside trails to keep you happy and relaxed before you return to the mainland.

Top tip: rent a bicycle or a canoe and spend the day cruising from one island to the next.