Vancouver is famous for being surrounded by spectacular water and mountain scenery, but it’s also become increasingly popular for its outstanding food and drink scene. In fact, many say it’s the best city in all of Canada when it comes to dining, and both Conde Nast Traveler and Food and Wine magazine named it among the world’s best food cities. 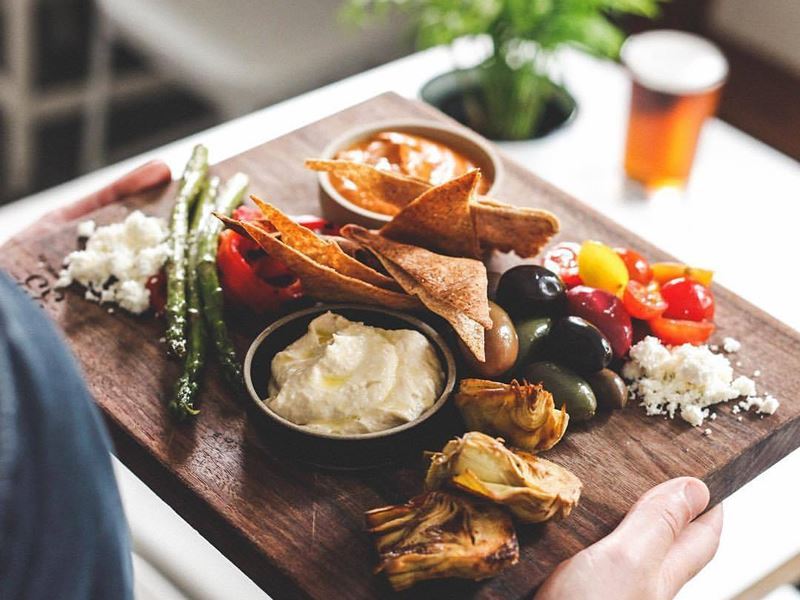 When envisioning food and drink in British Columbia’s largest city, one might imagine all-you-can-eat sushi, fresh seafood, comforting poutine, and good microbrews. While it definitely has stellar sushi, and plenty of poutine too, in Vancouver you’ll find French, Greek, Thai, Italian, Indian, Vietnamese and pretty much everything else your heart desires and probably a few things you didn’t even know you wanted either. You’ll find it in fine dining restaurants, charming cafes and other casual eateries, upscale bars, microbreweries, pubs, farmers markets and more. Of course that makes it hard to know where to begin, so we’ll give you a good head start on making the most of Vancouver’s food and drink scene.

There are so many top-notch eateries in Vancouver, you’re going to have to spend quite a bit of time here in order to sample them all, but if you’re searching for the best of the best restaurants, you might want to start with the Blue Water Café & Raw Bar. Order raw from the sushi bar or cooked from the open kitchen at this renowned Yaletown eatery, when it comes to fine dining and fresh seafood, it just doesn’t get better than this. Expect exceptional white linen service, and lots of creative, sustainable dishes like poached periwinkles along with to-die-for Alaskan king crab, Dungeness crab and lobster. If you can’t decide, ,you might want to go with executive chef Frank Pabst’s “Seafood Tower,” a legendary favourite with prawns, oysters, salmon tartare, jellyfish, seared red tuna, mussels, clams, scallops and chilled lobster. No matter what you get, you can pair that delectable meal with a perfect glass or two of vino too, as Blue Water carries more than 1,000 labels and has a cellar with some 14,000 bottles. 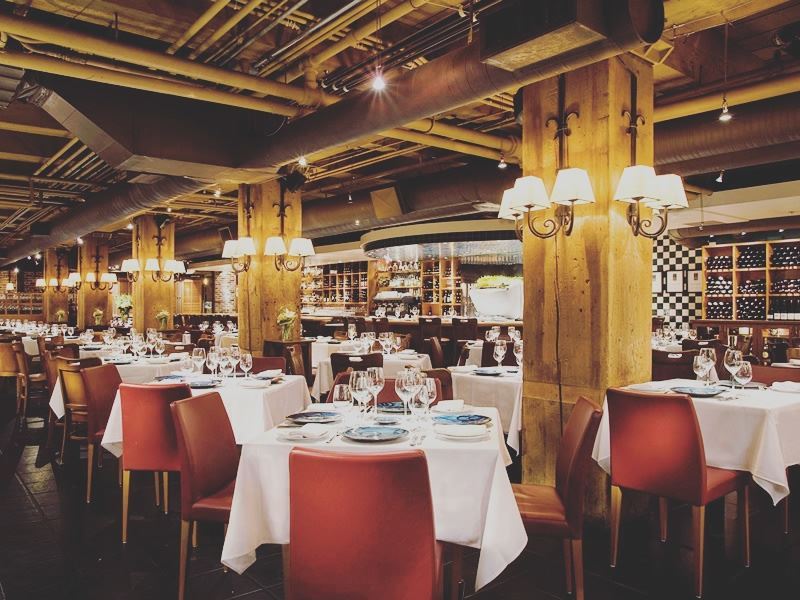 Bauhaus Restaurant in Gastown has been named among the world’s top 50 restaurants and the very best spot for European cuisine in Vancouver. Despite the accolades, it’s not a pretentious place – you might even see the chef come out to say hello, and take your empty dishes while he’s at it. The menu is focused on German cuisine with a modern twist, and includes those comfort food classics like wiener schnitzel as well as entrees like dry aged beef strip and pappardelle.

One of Vancouver’s top French restaurants, Absinthe Bistro serves a changing menu that features three starters, three mains and three desserts, focusing on quality rather than quantity. You might find items like sablefish paired with roasted yucca root, and clams and mussels with lemon and herb sauce; duck leg confit with crushed potatoes, roasted broccoli puree and blueberry glaze; or, panko crusted pressed pork shoulder with celeriac puree and apple aioli. Notch8 Restaurant & Bar at the Fairmont Hotel Vancouver, pays homage to the Fairmont’s place in Canadian history as one of the iconic railway hotels built by the Canadian Pacific and Canadian National Railways. Enjoy an atmosphere that’s a mix of new and old world charm, and a menu that blends local ingredients with an international touch. Dine on fresh British Columbia wild salmon, Sakura Farms pork, fire-grilled bison and Innisfail lamb paired with side dishes like marrow roasted vegetables and Yorkshire pudding. 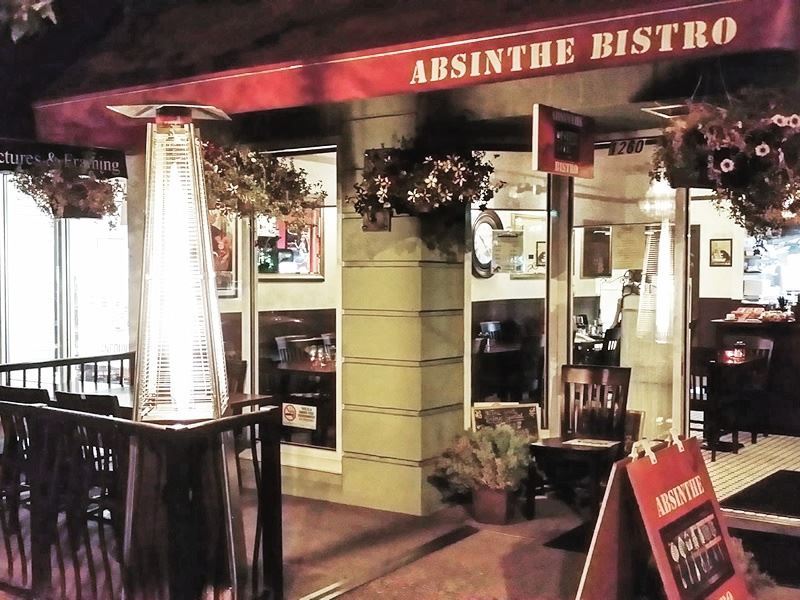 The place to go for foodies who want to experience haute Canadian cuisine, chef David Hawksworth’s very upscale Hawksworth Restaurant is consistently named one of the best eateries in all of Canada, creating farm-to-table contemporary Canadian cuisine as a true form of art – in fact, the dishes are so stunning, you might feel bad cutting into them, until you take a bite, that is. Then, you’ll forget all about the guilt. You’ll have a variety of dining rooms to choose from as well, including the Art Room and the Heritage Salon, the chandeliered Pearl Room and the bar and leather-panelled lounge. The menu features items like duck breast with a crisp duck croquette and Hamachi ceviche with sea buckhorn, jalapeno and pumpkin seed, all of which can be paired with wines from a very long, well-curated wine list. 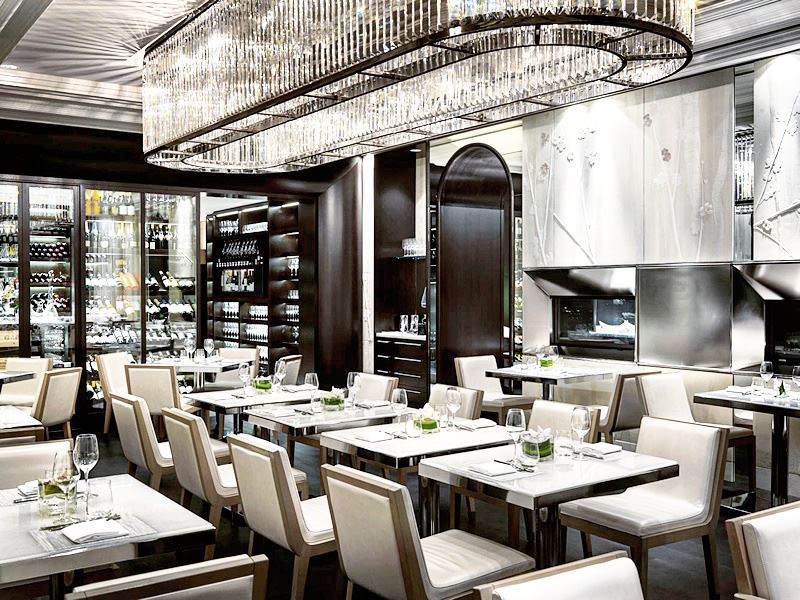 Vancouverites love their cocktails, so you’ll find plenty of original, now world-famous, cocktails served in this city that has a bar scene which ranges from glamourous, trendy and upscale to alternative gathering spots for the arts, and just about everything in between.

The Diamond in Gastown is one of the top-rated cocktail bars, and arguably one of the coolest. It sits on the second floor of a historic building that was once a brothel, and overlooks Maple Tree Square. The interior features a dazzling chandelier in the centre of the room, which is enclosed by industrial red brick. Grab a seat by the window and enjoy a perfect view for people watching, along with your drink, served in a crystal class. While The Diamond oozes elegance, it still manages to have a casual, more laid-back neighbourhood atmosphere. It also serves up a tasty selection of sushi rolls, nigari, bowls and plates. 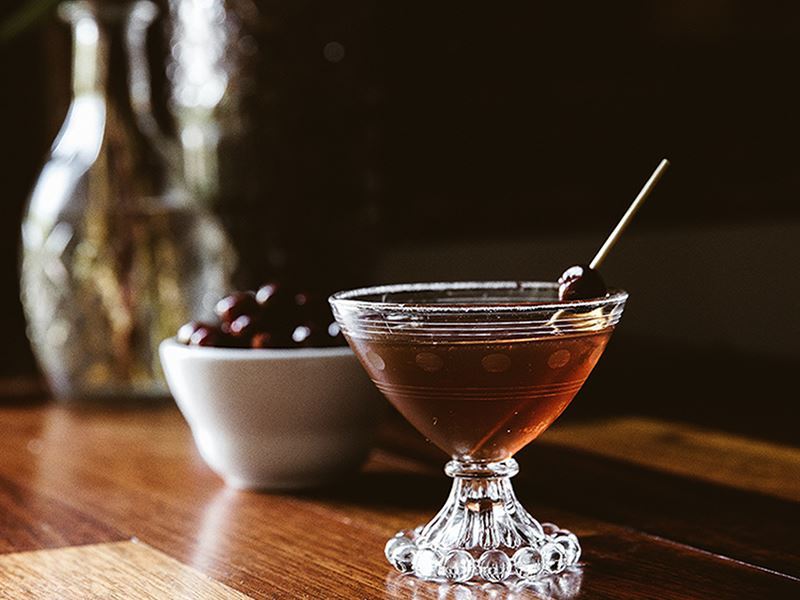 Prohibition is hidden away inside the Rosewood Hotel Georgia’s basement. This Jazz-era inspired speakeasy-style bar boasts velvet drapes, leather banquette seating, and an attractive bar where you can order especially creative cocktails like the Inception Negroni, which has attracted drink enthusiasts from Europe and beyond. You can also enjoy live entertainment every night, and the acoustics of the room were designed so that you can still enjoy a conversation while the music is playing. 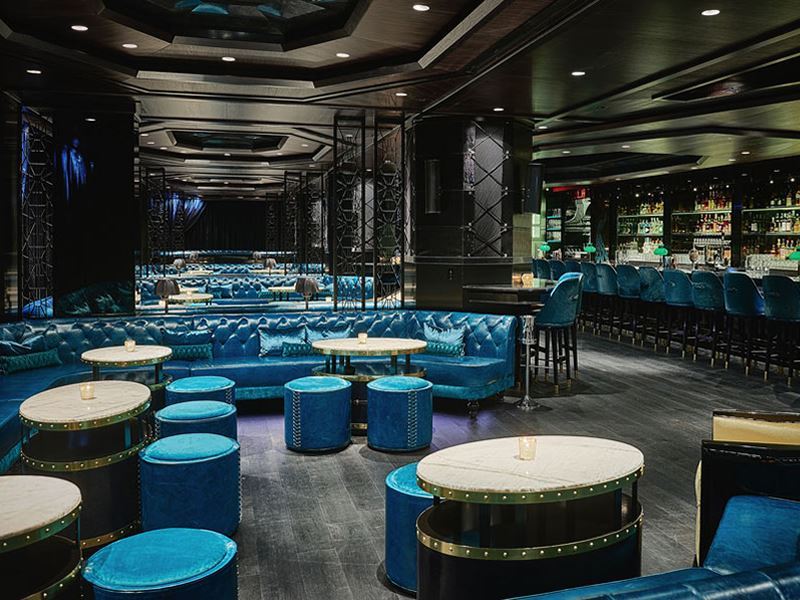 The Narrow Lounge is a “secret” cocktail spot – you’ll need to look for the little red light on the city’s main street, before entering through the graffiti-covered passageway, descending into a dark, gothic-style basement. When you need a break from the dark, you can head out onto the colourful tropical outdoor patio illuminated with quirky lanterns, preferably with a Cosmopolitan.

Vancouver’s craft brew scene has been reshaping the city with new breweries popping up all the time, some even creating micro-beer districts like Brewery Creek and Yeast Van. A beer crawl here is truly something you’ll never forget with the chance to enjoy everything from wild yeast hybrid brews to barrel-aged sours as well as old favourites.

33 Acres Brewing Co. opened in 2013, and has quickly become one of the most popular breweries in the city. Now a neighbourhood hub, its birth was also the start of the Brewery Creek craft beer district. Housed in a small converted storefront, the minimalist brewery now opens up at 9 a.m., so you can pick up your morning latte, and then in the evening swing by for a beer, like the 33 Acres of Ocean, a West Coast-style pale ale. There are locally-sourced food options too, which have expanded from beer snacks to beer waffles and charcuterie plates. 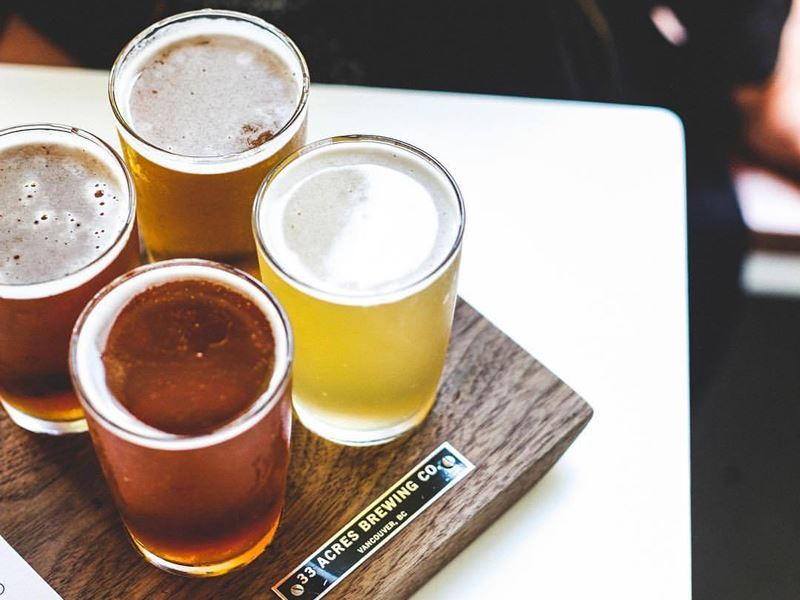 Tap and Barrel boasts a location on the False Creek Seawall in the heart of Olympic Village, and it has what may be very best patio for indulging in craft beer in Vancouver too. The two-story restaurant offers magnificent views and a covered, heated patio to enjoy during the chillier months, extending when the weather is warm to become a huge, award-winning patio. It serves an outstanding exclusive selection of local brews, with over 20 B.C. beers on tap, as well as 14 B.C. wine taps. Steamworks Brewpub was named after the steam pipes that power its brewhouse, which also run through the steam clock in Gastown. The steam that's used to craft the beer is city-supplied and the brewing process can be seen right through the dining room's glass walls. The expansive windows offer views of the mountains and the water, and on a cold winter’s day, you can relax with a Jasmine IPA, a creamy Coal Porter or anyone one of the wide selection of outstanding brews, next to the warmth of a cosy fireplace. 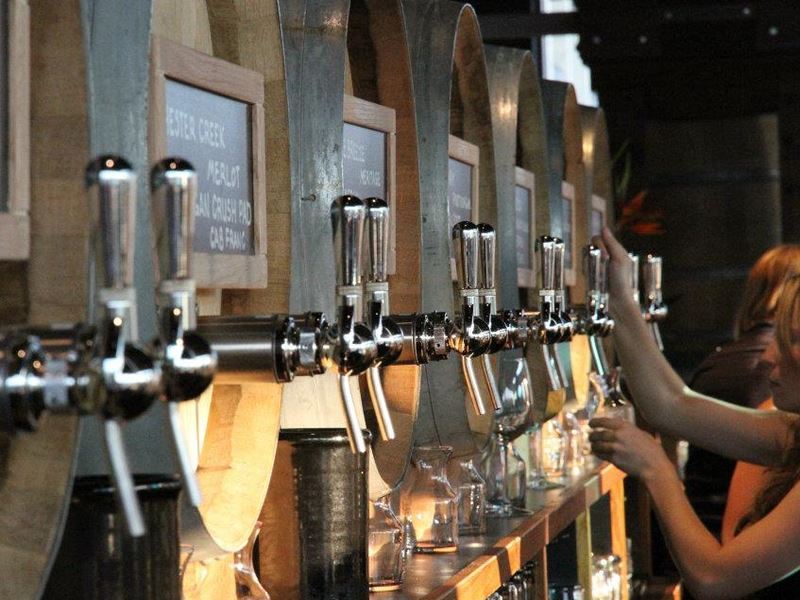 The Fraser Valley wineries are just an hour’s drive east of Vancouver, but if you don’t want to get behind the wheel, you’ll find plenty of opportunities for tasting right in the city, like Vancouver Urban Winery. The small batch winery produces handcrafted wines using only British Columbia grapes. Its tasting room offers three dozen wines on tap, including in-house wines as well as wines from other B.C. wineries. 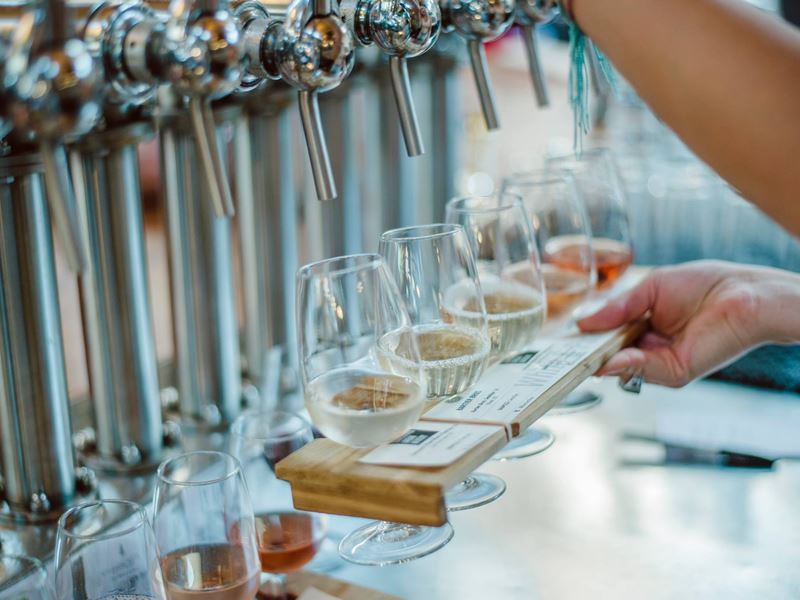 The Salt Tasting Room is consistently ranked as the city’s top wine bar and is located in Gastown’s infamous Blood Alley in an open, exposed brick room. There are over a dozen Sherries on the menu, along with red, white, and sweet wines. Ciders, beers and spirits are available too, sourced locally and from the U.S. and Europe. Diners can choose from a list of cured meats, 10 different cheeses and a range of condiments, which are artfully paired with Sherries, Ports, wines and beers from the extensive, weekly-changing menu. 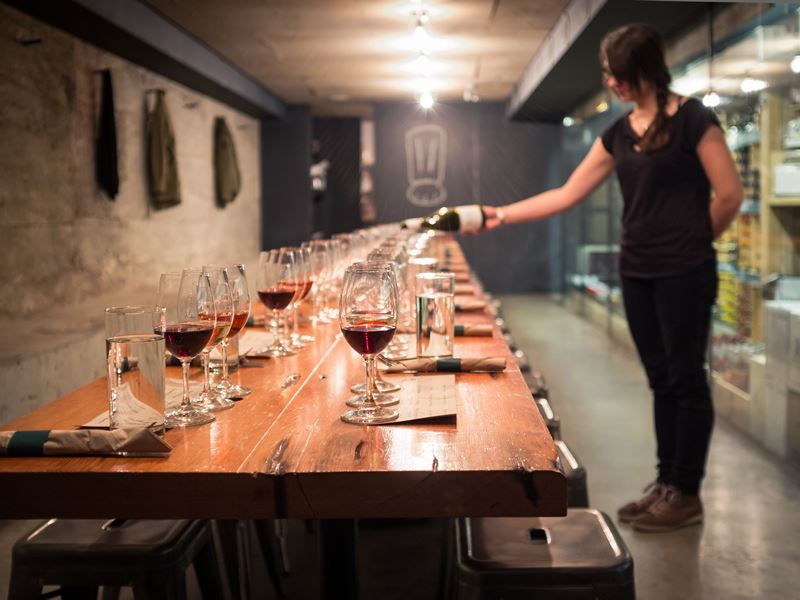 While Marquis Wine Cellars on Davie Street is more of a wine shop, the staff is made up of knowledgeable wine experts that can give patrons a tour of their favourite wines. Special tasting events and dinners are hosted here as well.

Vancouver is home to a number of outstanding farmers markets too, where you can taste some of the area’s freshest and tastiest foods. Granville Island was once an industrial site, but it was transformed into what’s become one of the most popular neighbourhoods in the city with its former factories now housing art galleries, hip eateries and boutiques, but the highlight of it all is the Granville Island Public Market, open on Thursdays, June through October. One of the top open-air markets on the continent, you can buy all types of items, from fresh seafood and artisanal cheese to rare mushrooms, homemade charcuterie. Visitors can also enjoy lunch outside along the water while watching the boats glide in and out of English Bay. 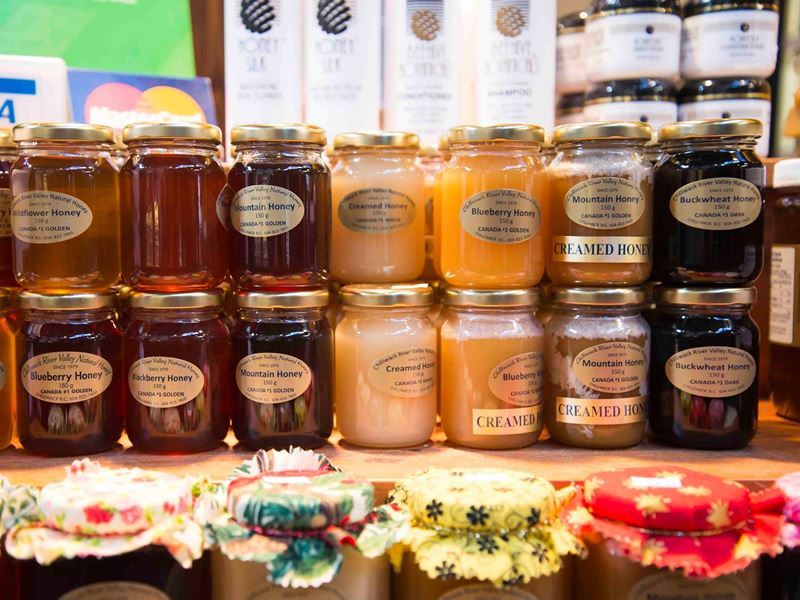