Edmonton, the booming and sprawling capital of Alberta province, has a reputation for being well spread out. Yet, fortunately, most of its top historical and cultural attractions, along with endless opportunities for shopping, dining and entertainment, are concentrated very centrally, making it a great city to explore on foot. Spend a couple of days strolling the streets and you’ll discover architectural gems and heritage sites, acclaimed galleries and museums, farmer’s markets, world-class festivals, beautiful parklands and plenty more. Starting in Edmonton’s core and working our way outwards, here’s how to explore the best of Edmonton on foot.

Edmonton’s oldest and densest area, this is one of the busiest and most happening districts of the city. It harbours a wealth of fantastic attractions interspersed amongst historic buildings and shiny skyscrapers alike. In addition to the architectural, historical and cultural sites, downtown features a wide range of retail, dining and nightlife options making it a fun-filled destination with something to offer everyone. 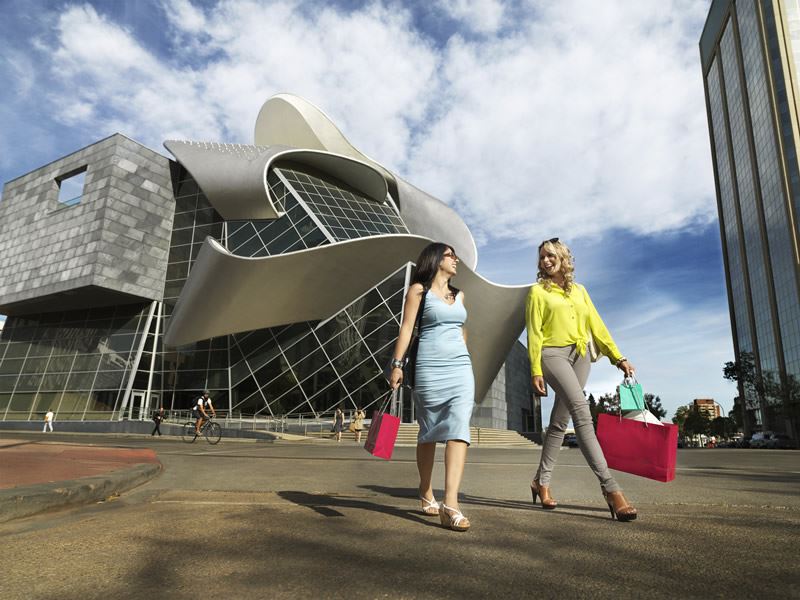 Start you walking tour in the heart of downtown in the government core area, home to the impressive Alberta legislature. This beautiful colonial-style structure dates back to 1911 and stands as one of the province’s finest historical buildings. Free guided tours are offered hourly, providing a glimpse into the plush interior and the chance to learn about the province’s historic events and laws. The surrounding area is also a great spot for relaxing, with neatly-manicured grounds to stroll through, as well as wading pools and fountains perfect for cooling off in summer.

For more historical delights, follow the Heritage Trail (identified by its red brick paving stones), beginning at the Alberta Legislature and winding its way east past some of the city’s oldest buildings and landmarks, including Edmonton’s first schoolhouse and the grand Freemason’s Hall. The City Hall is also well worth a visit. Guided tours provide the opportunity to admire the art and architecture and learn about Edmonton’s past and the work of the municipal government. Right outside City Hall you’ll find Edmonton’s original and award-winning farmer’s market, offering the perfect excuse to stop for a snack. Browse stalls overflowing with fresh produce, local meats, breads and wines, along with sweet treats and takeaway meals. The market also attracts some of the city’s best buskers and street performers and is famous for its friendly, open atmosphere. 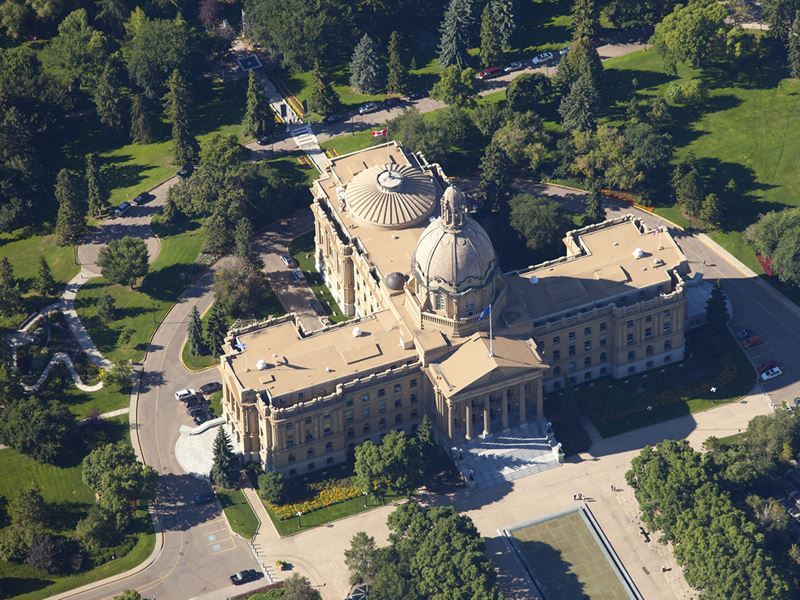 To contrast the city’s historical buildings, take a stroll down 101 Street from Jasper to 103 Avenue and admire some of Edmonton’s most stunning modern structures, including the white marble-clad Bank of Montreal and Manulife Place, the city’s tallest and more iconic skyscraper. Continue up to 104th Street and the surrounds gradually shift to incorporate early twentieth century warehouses. This street is also home to the unique Neon Sign Museum, an outdoor display showcasing a range of historical neon business signs dating back decades. Be sure to come after dark for the best experience!

Next up, make your way to Sir Winston Churchill Square which forms the centrepiece of Edmonton’s bustling arts district. Pause to admire the beauty of the surrounding architecture, then waste no time diving straight into the wealth of cultural attractions.

Top of the list should be The Art Gallery of Alberta which boasts over 6,000 pieces of local and international art, housed in a striking modernist building. Explore eight galleries spanning a wide range of periods and media, from painting to sculpture, illustration to photography. Pay a visit to the fantastic on-site theatre, restaurant and sales gallery or benefit from a diverse array of art-focused tours, talks, activities and classes.

Also not to be missed is the soon-to-be-opened Royal Alberta Museum, which is currently in the process of completing a move from its former site in West Edmonton to a new and improved building in the arts district. One of Canada’s most prestigious museums, RAM is dedicated to showcasing the rich natural and cultural heritage of Alberta province through a collection spanning more than 10 million artefacts. Marvel at life-sized recreations of prehistoric mammals in the Wild Alberta gallery, inspect weird and wonderful insects in the Bugs Gallery and hear the fascinating stories behind First Nations artefacts in the Syncrude Gallery of Aboriginal Culture.

Meanwhile, music lovers should catch a live performance at the world-renowned Winspear Centre or Citadel theatre. Whether it be a classical concert, family-friendly play or a riveting performance by the Edmonton Symphony Orchestra, there’s something to suit all ages and tastes. 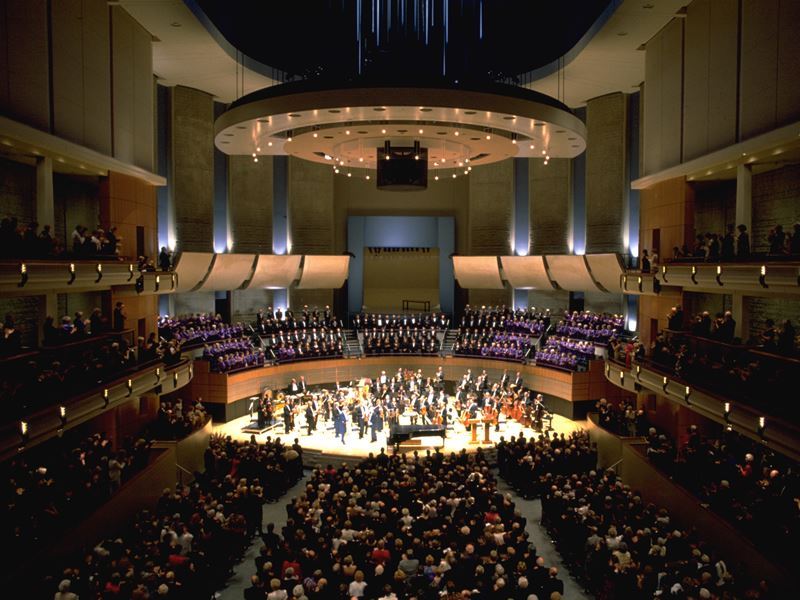 For a spot of shopping, make a bee-line for the nearby Oliver neighbourhood, a pedestrian-friendly area filled with a unique mix of character houses and boasting panoramic views over the river valley. Head to 124th Street for the best of the action, where you’ll find trendy cafes, boutiques, gift shops, galleries, spas, elegant restaurants and a selection of great nightlife options. A new brewery district has also recently opened up in the area, which will be sure to add yet more excitement to one of Edmonton’s most up and coming neighbourhoods.

If you’re in the downtown area and feeling peckish, head to the foodie focused McCauley district, better known as the area incorporating Chinatown and Little Italy. This lively multicultural district is a fantastic place sample ethnic eats at great value. Little Italy is home to a vibrant immigrant population, dozens of grocers and bakeries, along with the best Italian cuisine in the city. Edmonton’s Chinatown is equally authentic, brimming with outdoor markets, intriguing food stores and mouth-watering restaurants. Be sure to admire the magnificent Harbin cultural landmark on your way in or out - a beautiful gate built as a sign of friendship between Edmonton and its Chinese sister city, Harbin.

If you fancy stretching your legs some more and getting in touch with the city’s more natural side, there are several options all easily accessible from downtown. The Glenora neighbourhood with its elegant homes and quiet tree-lined streets is a real treat to stroll around. Admire fine Victorian architecture around Alexander Circle and marvel at elegant brick mansions on giant lots. Nearby, you’ll also find Edmonton’s River Valley park system which makes up the longest stretch of urban parkland in North America. With expansive green spaces interspersed with over 30km of multi-use trails, along with gardens, golf courses, picnic areas and sporting facilities, this is the perfect place for relaxation and recreation far removed from the commotion of city life, yet just a short hop from downtown. 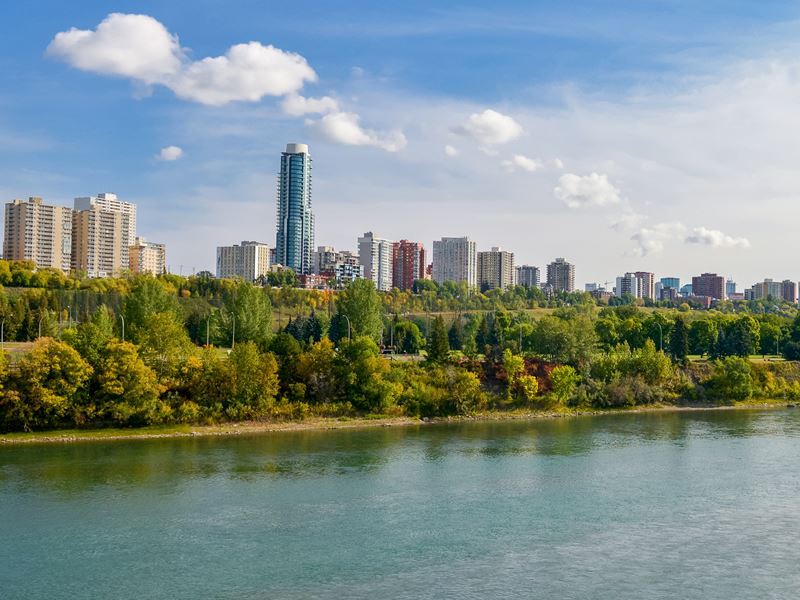 Originally known as Strathcona, this is another well-established area of the city, situated just south of the North Saskatchewan River and boasting great views of downtown and the river valley. This district is popular with locals and tourists alike and particularly renowned for its interesting architecture, theatre companies, nightlife and festivals, along with fantastic shopping and dining. Home to the University of Alberta, it boasts a lively, youthful vibe with plenty of funky venues to explore.

Old Strathcona can be conveniently accessed via the High Level Streetcar service, which is an experience in itself. May through October, this vintage streetcar transports passengers from downtown across the North Saskatchewan River. The High Level bridge is the highest streetcar river crossing in the world and boasts breath-taking views over the cityscape and river valley. The line terminates just outside the Old Strathcona Farmer’s market, another venue well worth checking out with over 130 vendors selling a diverse array of locally-made foods and crafts. 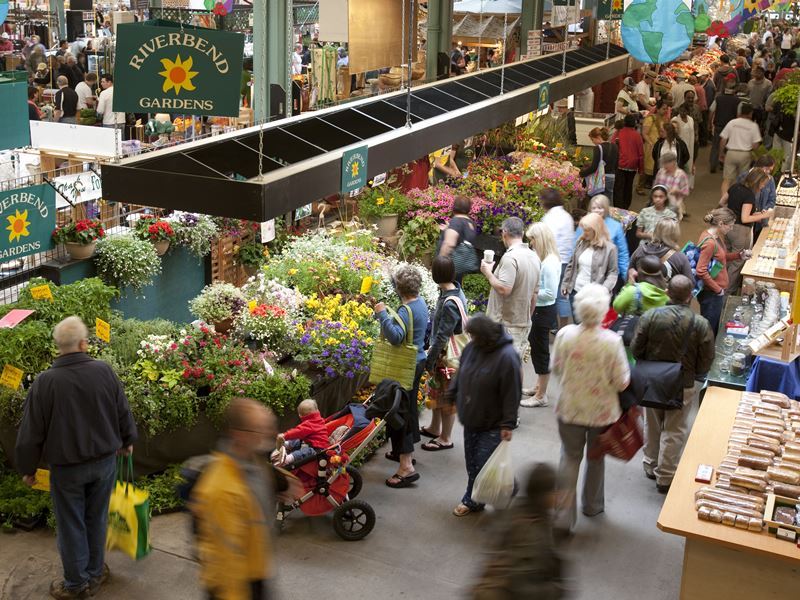 Strathcona was originally established in 1899 as a typical prairie town and distinct settlement from Edmonton across the river. Much of this early history is still reflected in its charming architecture today which includes churches, warehouses and old-fashioned storefronts. For a unique experience, take an exhilarating ghost tour around some of the area’s most historically-important buildings. Your guide will recount interesting facts and stories about one of Edmonton’s oldest communities with a spooky twist!

Over the decades, Strathcona has undergone considerable revitalisation, emerging as Edmonton’s premier retail and entertainment district. The older style buildings are now complimented by plenty of newer builds, resulting in a striking blend of architectural styles that provide endless interesting photo opportunities. Plenty of bright street art can also be found in Strathcona’s streets, reflecting the area’s edgy vibe. Sign up for the Old Strathcona Mural Tour to see some of the most stunning examples.

Much of the action south of the river centres around the vibrant Whyte Avenue. This strip boasts an amazing nightlife scene with an abundance of bars, clubs, theatres and live music venues attracting night owls from across the city. It’s also full of trendy shopping, from quirky clothing stores and chic boutiques, to indie bookstores and one-of-a-kind gift shops, as well as salons, spas, tattoo shops and vintage record stores aplenty. Mouth-watering food can be found in more than 100 cafes, pubs and restaurants representing cuisines from across the world. The area’s popular summer patios are especially great places for enjoying the lively atmosphere. Simply sip a cocktail or enjoy a cooling gelato and soak in the cool vibe.

South central also plays host to some fantastic festivals throughout the year. During the summer you can expect to find a special event of some sort taking place almost every week. Seemingly every arena is covered, from music, theatre and heritage, to food, fashion and art. Hawrelak Park near the University Alberta is one of the city’s most popular green spaces and plays host to Shakespeare in the Park and Symphony Under the Sky. Definitely not to be missed is the celebrated Edmonton International Fringe Theatre Festival. Second only to Edinburgh’s, it attracts half a million people each year with over 1,000 performances taking place over 10 days.

For a change of pace, the botanical gardens at the acclaimed Muttart Conservatory offer a peaceful retreat from the bustle of urban life. Four striking glass pyramids hold a plethora of plant species spanning the Earth’s major biomes, including lush tropical foliage, towering evergreens and unusual cacti. Knowledgeable interpreters provide insight into the spectacular plants and the horticultural work of the conservatory. You can also tour at your own pace, check out the creative art installations and stroll around the tranquil grounds that border the river.

A little further out, but still within walking distance of Edmonton’s centre, there are a couple more top attractions well worth visiting. West of downtown, a trip to the West Edmonton Mall is an absolute must. This massive shopping and entertainment venue is pretty much a district – if not an entire city – in itself. It’s the largest mall on the continent and pretty much unrivalled in terms of the sheer number and diversity of things to do. Its 800 stores and 100 restaurants offer copious opportunities for shopping and dining, whilst cinemas, casinos, mini golf, an ice rink and plenty more offer non-stop entertainment. With an amusement park, aquarium and indoor water park complete with artificial beach and wave pool, West Edmonton Mall is especially great for the kids.

One of the biggest attractions in South Edmonton is the history-filled Fort Edmonton Park, nestled in over 60 hectares of wooded parkland in the North Saskatchewan River Valley. As Canada’s largest living history museum, it brings Edmonton’s storied past to life through several remarkably authentic historic streets, an array of intriguing artefacts and a wealth of fun activities. Costumed interpreters are on hand to provide insight into the life of the early pioneers, as well as staging musical performances and live demonstrations of heritage skills. Ride a range of period transportation, from wagons to steam trains, let loose in the amusement park, and satisfy your sweet tooth at the old-fashioned bakery or ice cream parlour.