1.  Thousands of miles of spectacular coast

With over 8,000 miles of coastline, you’re always close to the ocean in Nova Scotia. Here are our favourite beaches:

Melmerby Beach - A mile and a half of sandy beach known for having the warmest waters north of the Carolina’s.
Martinique Beach -  Nova Scotia’s longest white sand beach stretching for over three miles and an ideal spot to search peacefully for sea glass and sand dollars.
Mavillette Beach -  A mile long sandy beach back with boardwalks over fragile marram grass.
Inverness Beach -  A lovely boardwalk where you can stroll and watch the golfers at the Cabot Links, plus the lifeguarded area is fully accessible with mobility mats, sand and swim chairs. 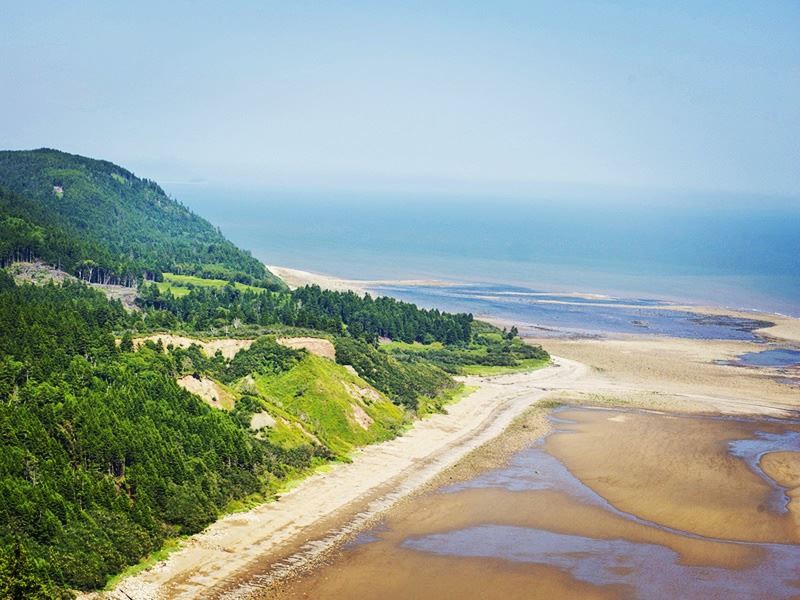 2. The Heart of Halifax

The heart of Halifax is actually a star but its pulse can be felt on sunny patios, urban streets and a vibrant boardwalk.  Halifax is Nova Scotia's capital city and the waterfront is the most visited destination in all of Nova Scotia. Learn what a "sociable" is* and sample a tasty donair, the official snack of Halifax – a kebab made unique by its “secret” spices.

Here are our must-dos whilst visiting Halifax:

Stroll the waterfront boardwalk which spans over two miles from the Canadian Museum of Immigration at Pier 21 to Casino Nova Scotia. Along the way explore the museums, browse the boutiques, dine at a waterfront restaurant, enjoy a harbour tour, take a ferry to Dartmouth and end the day on a patio watching the sunset over the harbour.

Maritime Museum of the Atlantic is Canada’s largest and oldest Maritime museum is home to a permanent display of the largest and finest collection of wooden Titanic artifacts in the world.

Originally built as a military fortification to protect the Empire from enemies, the Halifax Citadel National Historic Site and its distinctive Clock Tower act as a reminder of Halifax’s rich history, right in the heart of the city.

Point Pleasant Park, situated in the south end of Halifax, is an historic wooded park crisscrossed with a combined 24 miles of easy winding trails and wide paths, and you’ll get to see the preserved ruins of early fortifications scattered. 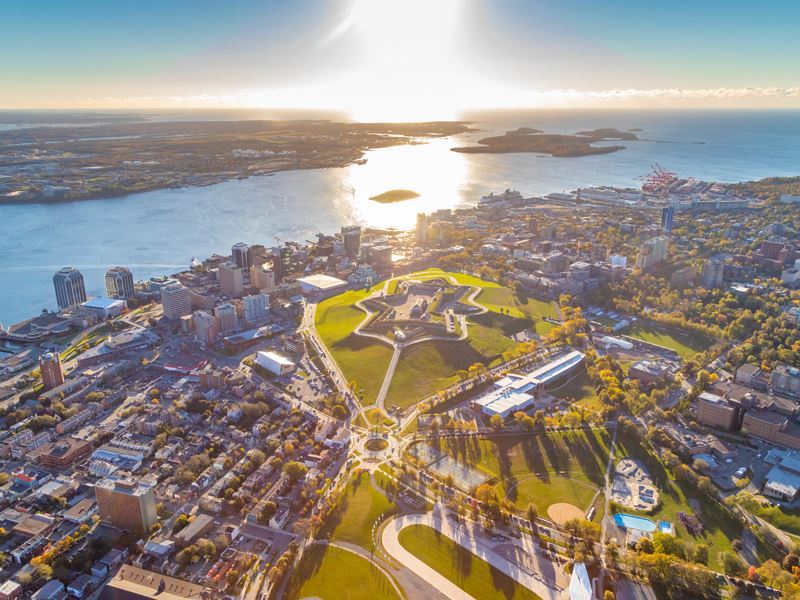 The Cabot Trail is considered to be one of the most scenic drives in the world, weaving through the Cape Breton Highlands National Park, with awe-inspiring coastal views. There are 24 beautiful “look-off points” along the way, 26 beautiful hiking trails, 6 beaches and several picturesque villages.

Popular trails include the Franey Trail near Ingonish and the Skyline Trail near Pleasant Bay, which is known for its spectacular sunsets.

From Canada’s first true links course at Cabot Links and its top-ranked sister course, Cabot Cliffs, to the classic Highland Links, Nova Scotia welcomes the world to discover the exceptional golf experience awaiting golfers of all levels. Discover courses to challenge your game set against a scenic coastal or lush green backdrop that's easy on the eyes.

Explore the Artisan Trail and be inspired by some of Nova Scotia’s finest talent. Art and craft tend to mirror the heritage, lifestyle, and geography of the region in which the artists live and work. Nowhere is this more evident than on Cape Breton Island, with its stunning landscapes, rich
history, and proud traditions that have fostered a dynamic creativity among its craftspeople.

At the Alexander Graham Bell National Historic Site, you can learn about and see many of his inventions beyond the telephone. Did you know that Bell’s career began as a teacher of deaf and hearing-impaired people? His curiosity and determination would lead to Canada’s first powered flight, the world’s fastest watercraft, advanced recording technology, giant tetrahedral kites and, of course, the telephone. 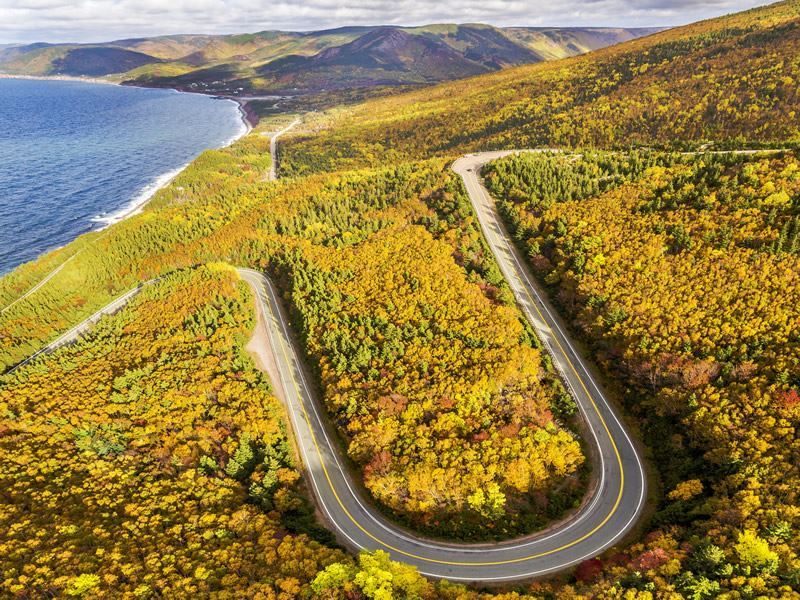 Each day, twice a day, 160 billion tonnes of seawater flow in and out of the Bay of Fundy, and Burntcoat Head Park is the site of the highest recorded tides in the world. At low tide you can easily make your way down the staircase to the seabed, and for one day each summer, the tides are low enough to safely run across the ocean floor and outrun the tides!

The shoreline cliffs near Joggins are home to the world’s most complete fossil record of life, from 300 million years ago, and is a UNESCO World Heritage Site. It may be hard to believe but in pre-historic times lush forests covered the area. Or in Parrsboro, you can explore the rocky shoreline with an experienced guide from the Fundy Geological Museum where you can also travel to a dig site by boat and uncover some of Canada’s oldest fossils. 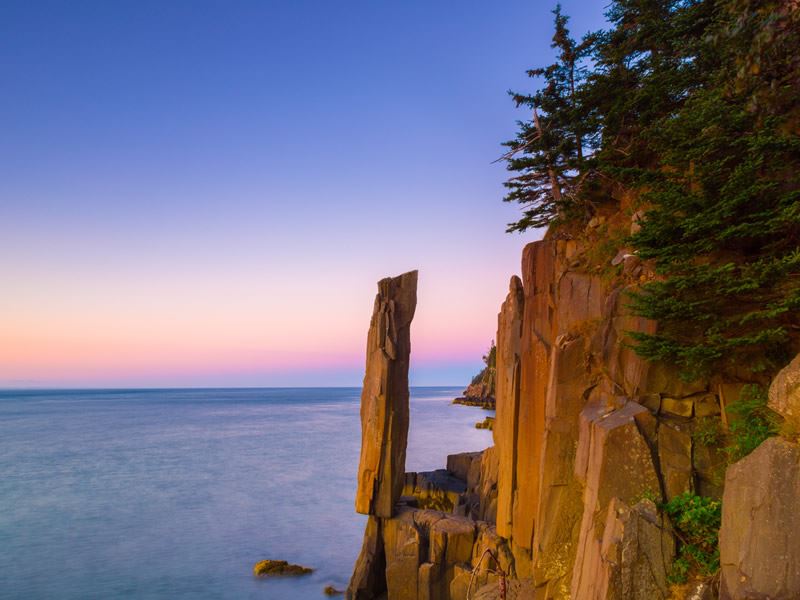 5.  There are 12 whale species swimming in the Nova Scotia waters

Summer and autumn are the best times to go whale watching in Nova Scotia.  The Bay of Fundy is home to several species of whales during the summer months, including the rare Right whale. The diverse waters off the Cabot Trail are abundant with marine life, making it another top location to experience a close encounter with a whale. 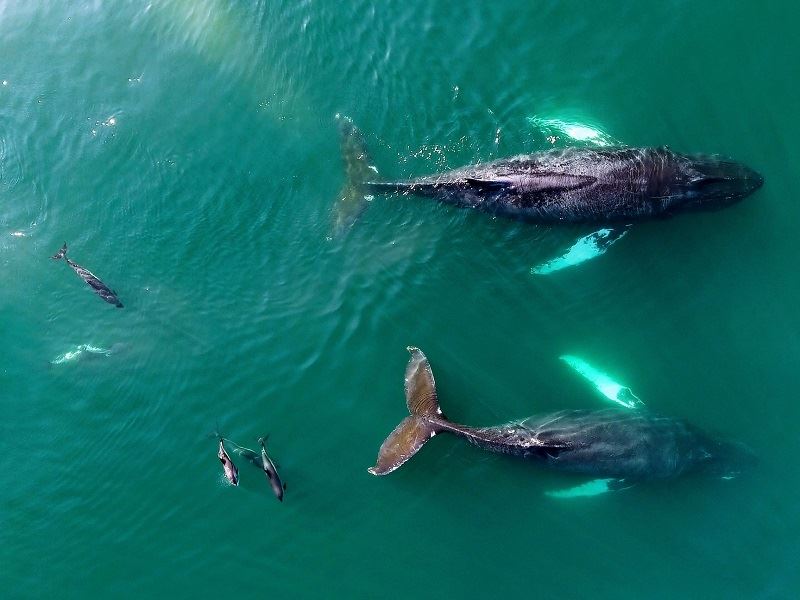 Nova Scotia’s wine country is shaped by the sea and is the only place on earth that produces Tidal Bay wines.  Nova Scotia has a long and rich tradition of growing grapes for wine that dates back to the 1600s, when this was one of the first areas to cultivate grapes in North America. The climate and soil conditions in Nova Scotia favour unique and distinctive grape varieties such as L’Acadie Blanc, Seyval Blanc, Lucie Kuhlmann, New York Muscat, and Baco Noir are just a few.

With over 20 wineries and vineyards, and growing each year, you can sample wines from sparkling and icewine to rosés and reds. And if your schedule allows then we suggest you follow the “Good Cheer Trail”  - Canada’s First winery, brewery, cidery and distillery trail! 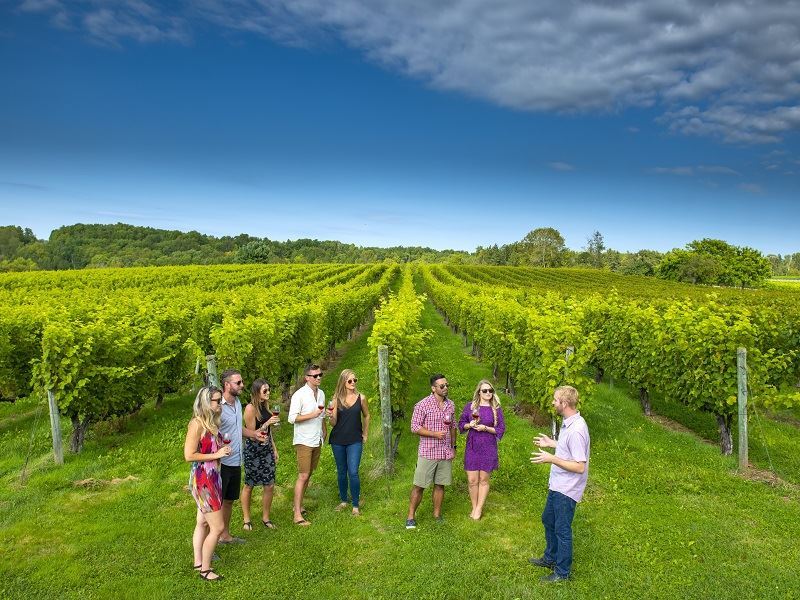 7.  A ceilidh is a celebration of song, stories and dance.

Music is an integral part of the fabric of Nova Scotia. Kitchen parties, ceilidhs, live music venues and music festivals are all a part life.  The vibrant music scene includes traditional fiddles and reels but also rock concerts, eclectic small town music festivals, jazz and even a symphony serving up beer and Beethoven. 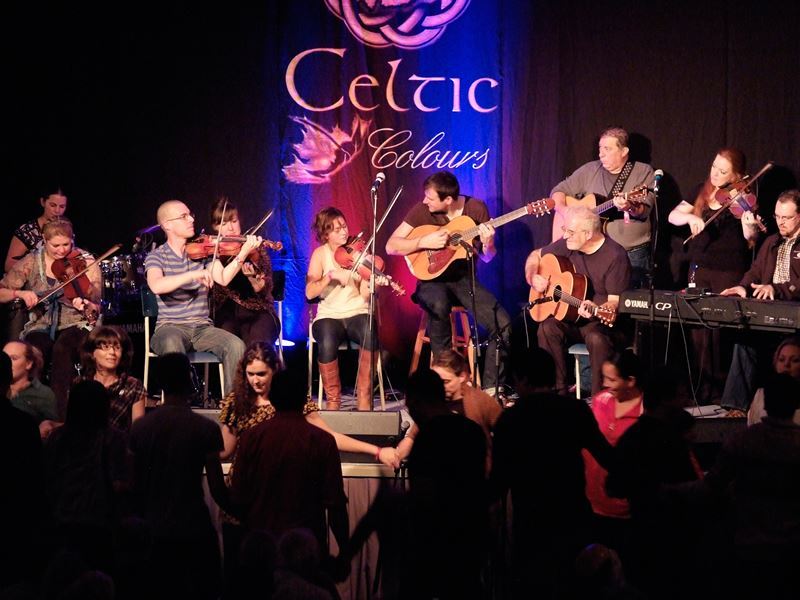 8.  Mi’kmaw stories refer to Kejimkujik as the “land of the fairies”

Kejimkujik National Park and National Historic Site is a magical place.  If you ask a Nova Scotian for advice on a place to get away from it all – a place with lush forests, meandering rivers and island-dotted lakes – you’ll likely hear the name “Keji” again and again. It is a place where you can escape the hustle and bustle of the world and immerse yourself in the natural beauty of Nova Scotia. This is the only Parks Canada site that is designated both a National Park and a National Historic site.

Kejimkujik is actually one park divided into two areas. The main park is located 11 miles from the village of Caledonia on Highway 8 and Kejimkujik Seaside lies approximately 60 miles southeast of the main park, along the coast near Port Joli. Both offer incredible opportunities to explore Nova Scotia’s natural and cultural heritage, see a wide range of wildlife or to simply sit back and soak it all in.

Visitors to Kejimkujik can explore the traditional waterways by canoe, following the same routes that were once taken by Archaic Indians, Woodland Indians and then the Mi’kmaw. They are also the same rivers and lakes that Albert Bigelow Paine travelled and described in his famous 1908 book The Tent Dwellers.

Hikers will love Kejimkujik’s 15 trails that cut through a wide range of forest, including Acadian Forests, red maple floodplains, windswept pine trees and  old growth hemlocks. These trails are open throughout the year, giving lots of opportunities to spot the park’s wild inhabitants, such as deer, foxes and the endangered Blanding’s Turtle. 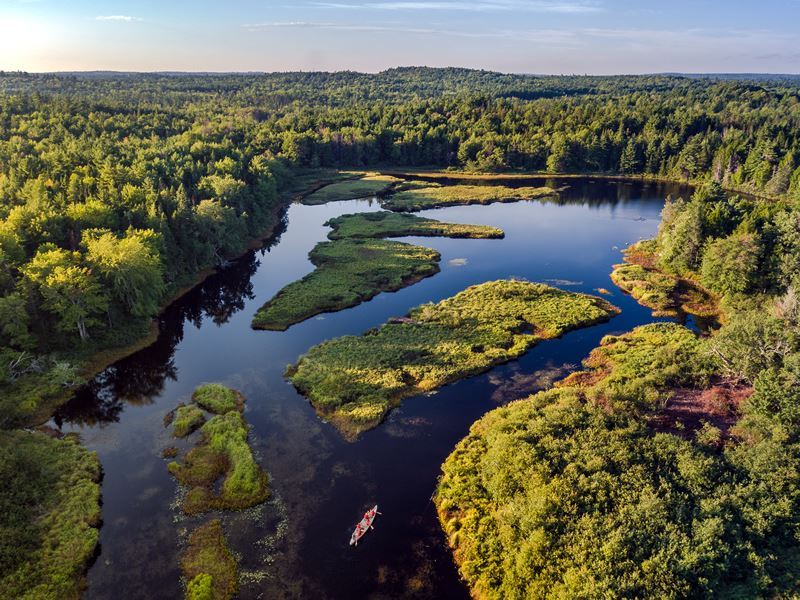 9.  50,000 tonnes of lobster are hauled from Nova Scotia waters every year

If you  haven’t eaten lobster in Nova Scotia, then you haven’t really eaten lobster!  Nova Scotia lobster is world famous and easily found in many restaurants across the province. The Lobster Trail showcases over 40 Nova Scotian restaurants serving up everything from traditional lobster dinners to lobster rolls, lobster poutine and even lobster pizza.  Make it your mission to try as many as possible while visiting Nova Scotia. Here are a few suggestions:

The Lunenburger at Grand Banker Bar & Grill, Lunenburg. Their signature dish is a is not for the faint-hearted - local ground beef, smoked mozzarella, smoked bacon and baby spinach, topped with lobster knuckles and claws and tarragon butter sauce, all served on a local artisan bun and picked with a bacon wrapped scallop.

Creamed Lobster at La Cuisine Robicheau, Saulnierville - a unique dish found mostly in the southwestern part of the province - the key to good creamed lobster is butter, whipping cream and a hint of vinegar

Lobster Poutine at Argyler Lodge, Argyle. While there are many lobster poutines available across the province, this one is made with creamed lobster, which is poured over fries and local cheese curds.

Lobster Roll at Capt. Kat’s Lobster Shack, Barrington Passage. Versions of lobster rolls can be found across the province, but this one is the best and they have the awards to prove it! Located in the Lobster Capital of Canada, their award-winning, mouth-watering version has a meat-to-bun ratio that is beyond impressive with large, visible chunks of fresh lobster meat tossed with crisp celery, green onion, spinach and mayo all piled on a fresh-baked, buttery bun.

And there is also Lobster Beer ... Crustacean Elation produced by the Salt Box Brewery in Mahone Bay, created by using lobsters and the lobster shells twice during the brewing process: once when whole lobster is added directly to the mash and later when the roasted shells are added back into the boil. 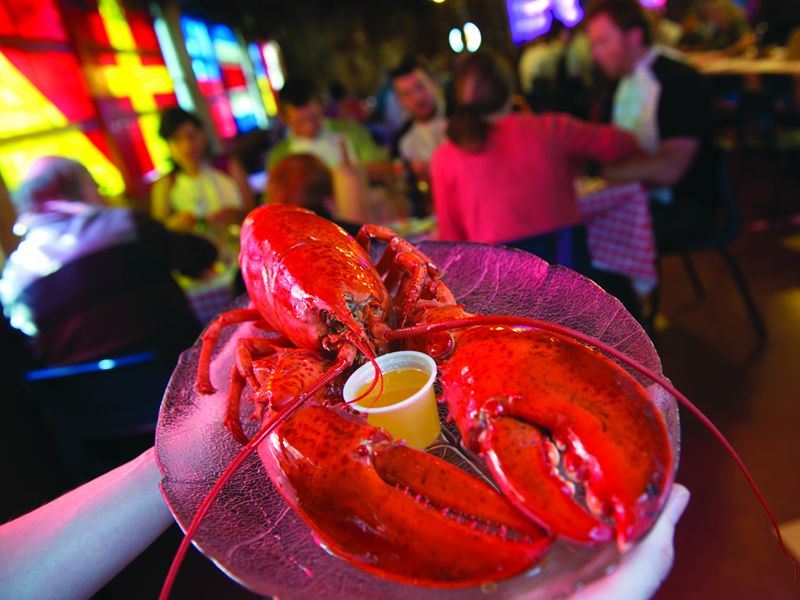 10.  Peggy’s Cove is one of the most photographed lighthouses in the world

Did you know that Nova Scotia is home to over 150 more?  For centuries, Nova Scotia’s lighthouses have greeted those who have arrived on our shores and have helped to protect those who make their living on the water. It’s also not particularly surprising that Nova Scotia has the largest number of lighthouses of any province in Canada with its thousands of miles of coastline.

Cape Forchu Lighthouse, the first ‘applecore’ lighthouse, is located near Yarmouth and is also home to the Leif Erikson Park, which consists of walking paths, picnic sites, and benches, and provides front row seats for amazing sunsets.

Fort Point Lighthouse Park in Liverpool is a Provincial Heritage Property open year-round offering picnic tables, interpretive panels and a beautiful view of Liverpool Harbour and Coffin Island Lighthouse.  The lighthouse itself has stood since 1855 and is open to visitors seasonally, offering a gift shop with Taste of Nova Scotia items as well as coffee, freshly baked sweets and ice cream. 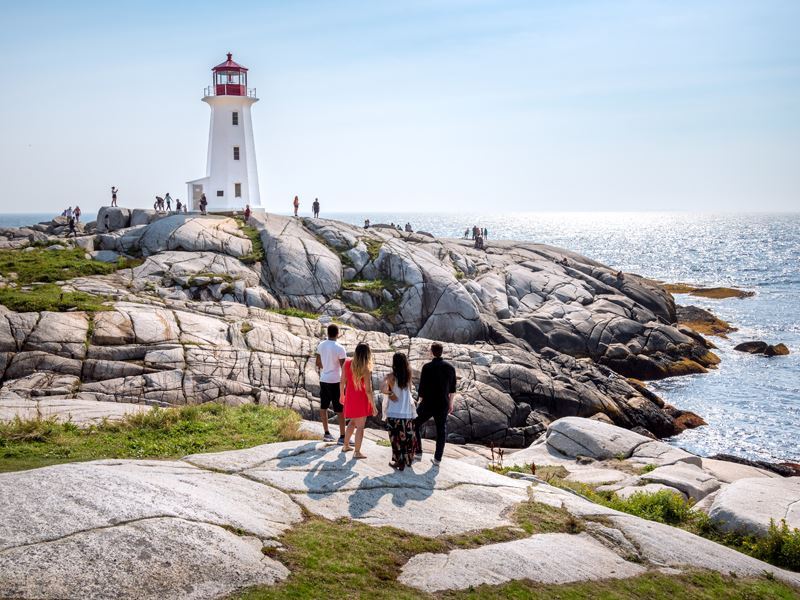