The province of Alberta is famous for its stunning Canadian Rockies scenery with soaring mountains, gem-like lakes, glistening glaciers and abundance of wildlife. Much of its striking beauty and animals can be found in its five national Parks: Jasper, Banff, Waterton Lakes, Wood Buffalo and Elk Island, although the state parks here are incredible too. Banff and Jasper offer plentiful opportunities for spotting moose, elk, bears, mountain goats, bighorn sheep and more, while Wood Buffalo National Park in the northern part of the province is a massive wilderness area home to thousands of free-roaming wood bison and other wildlife like beavers, wolves and cranes. Elk Island National Park houses a smaller translocated bison herd just east of Edmonton.

No matter where you are in Alberta, the list of wildlife sighting possibilities is likely to be long, but these wildlife encounters in particular are sure to be a highlight of any trip. 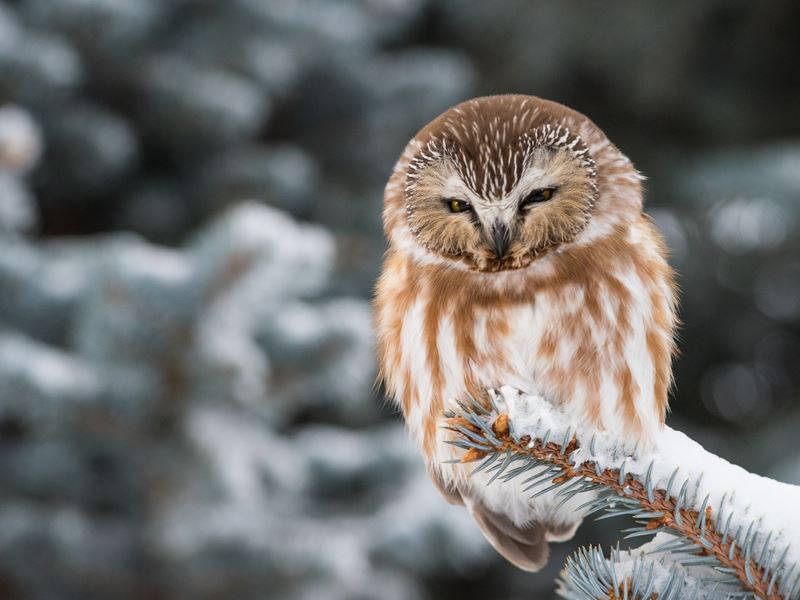 Watch the grizzlies at Lake Louise

Seeing a grizzly bear in the wild is quite the experience. It’s one thing to drive by and spot a bear off the side of the road, but to watch them along the shore of one of Canada’s must spectacular lakes, Lake Louise, or witness them in the meadows from above by taking the gondola at the ski resort beneath your dangling feet, is something you’ll never forget.

A prime grizzly bear breeding area, Lake Louise visitors are often surprised to see the village’s campground has an electric fence around it to keep the animals out. Around the lake, female bears and their cubs are frequently spotted in the spring. While traveling the road that links Lake Louise village to the lake itself, you may be able to spot grizzlies and their cubs feeding on the grass. In addition to spending time around the lake, if you visit during the summer be sure to take the gondola for an aerial view and see if you can spot the bears below. As the grass turns green again and new berries start to flourish it attracts these powerful creatures in search of food, with the grassy slopes right beneath the gondola providing the lush, rich vegetation they need for food. If you aren’t fortunate enough to see them, the ride is worth taking for the jaw-dropping views of the majestic Rockies, natural springs and colourful wildflowers.

The Plain of Six Glaciers Trail, which travels from Lake Louise, passes through a variety of breath-taking landscapes leading to Victoria Glacier, with bears often spotted feeding on grassy slopes in the summer and early autumn. 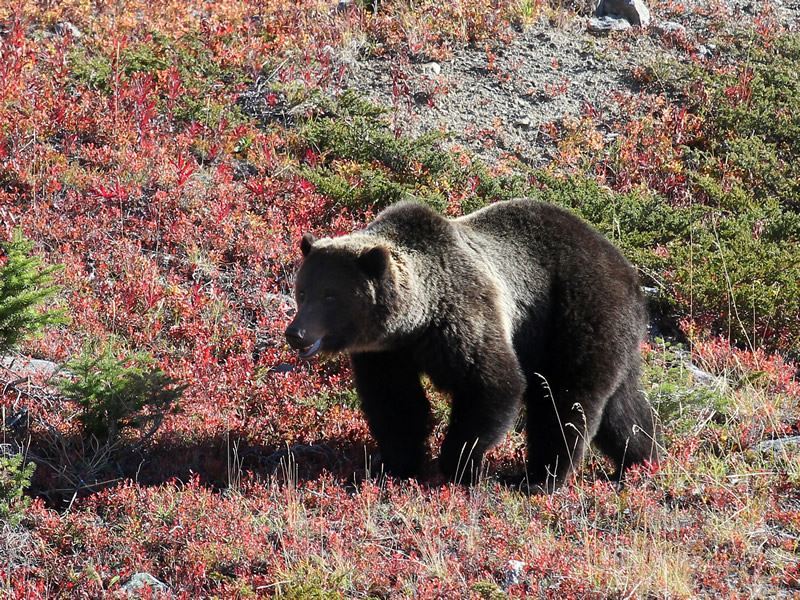 Sleep among the bison, elk and moose at Elk Island

Canada’s largest fenced-in national park is anything but tame. Elk Island National Park, just a short drive from Edmonton, is a preserve that hosts tranquil lakes, scenic trails for hiking and all sorts of wildlife, most notably, bison, although moose, elk, coyote and many other animals also call it home. There are so many bison roaming the park that bison traffic jams are common. While most people visit on a day trip, taking a “bison backstage” tour at the handling facility and reserving a comfy oTENTik through Parks Canada offers a far more enriching experience. The tour offers the chance to learn the secrets that helped bring the North American bison back from near extinction, with the animal’s population plummeting for around 30 million bison to less than 1,000 in the span of a human lifetime. A 45-minute drive on the bison loop brings the chance to watch the Plains Bison graze. Camping is in an oTENTik, an A-frame tent and cabin in one, offering more of the comforts of home along with a taste of outdoor adventure. It’s ideal for those who are coming from long distances and don’t want the hassle of carrying all their gear, with the campsite, including comfy beds, already set up and ready to go. Plus, you’ll be able to gaze up at one of the most dazzling night skies around, with the Beaver Hill Dark Sky Preserve found here in the park. 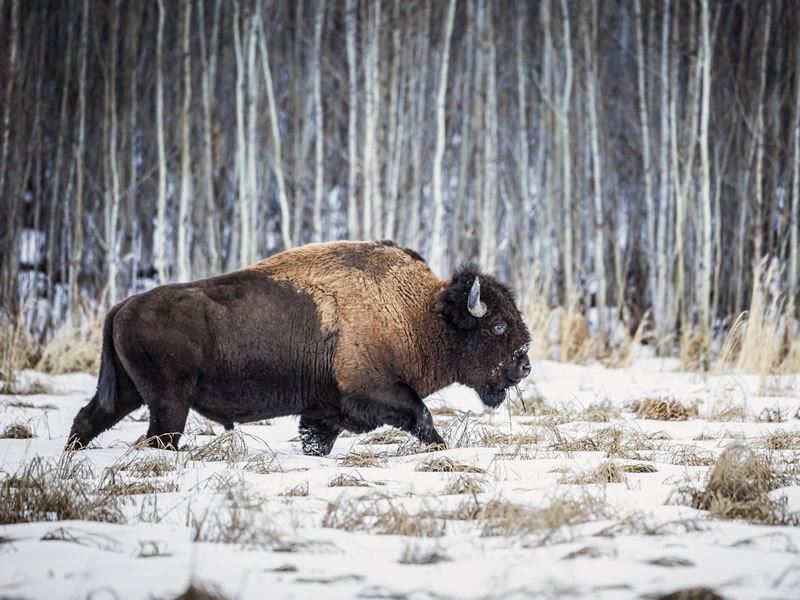 Howl with the wolves at Yamnuska Wolfdog Sanctuary

There are approximately 7,000 wolves in Alberta, but the best opportunity for an encounter can be found at the Yamnuska Wolfdog Sanctuary. It’s dedicated to providing programs that educate the public on responsible wolfdog ownership and the importance of preserving wild wolves in their natural habitats. The Sanctuary rescues and provides safe sanctuary to the animals while welcoming visitors to come and learn all about them.

The not-for-profit centre offers three different tours. The Interactive Tour allows for an up-close encounter, including physical interaction with the wolfdogs while the Intro Tour also includes an up-close experience and is ideal for those who want to capture photos for the animals in a natural environment. On the Sanctuary Walk, you’ll embark on a scenic walk, following pathways through the sanctuary while viewing the wolfdogs and informational signs. Drop-ns are welcome for the Intro and Sanctuary Tours, but advance booking is required for the Interactive Tours. 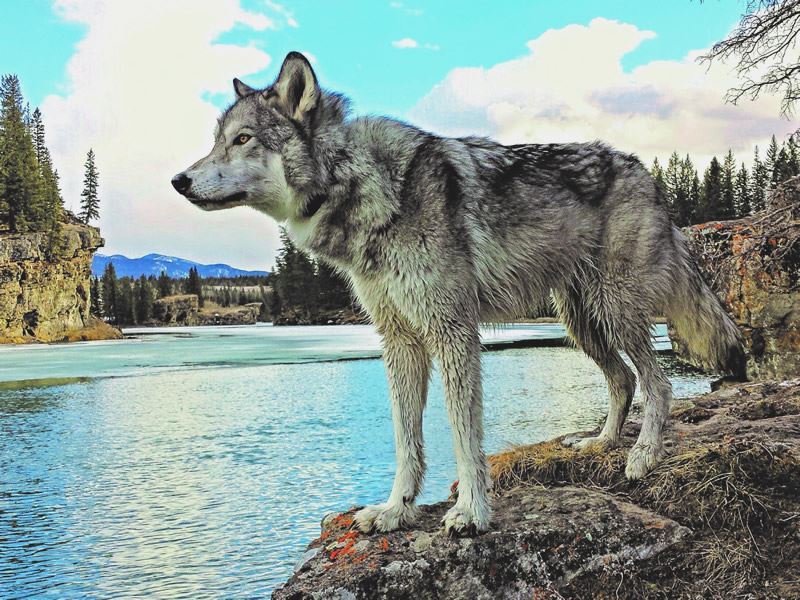 Gaze out at moose from your patio at Mount Engadine Lodge

If you’d like to enjoy wildlife encounters just steps away from your front door, book a stay at Mount Engadine Lodge. This backcountry lodge doesn’t require a hike to get to and moose can often be seen feasting through the meadow and slurping their way through the mud right from its patio. While the animals are typically solitary creatures that browse in dense forests, in this area, they behave a bit differently due to a large muddy pit that contains a mineral the moose need to stay healthy, selenium. Every morning at sunrise and again just before dusk, the animals materialize out of the fog, crossing the meadow as they make their way to their favourite spots in the mud pit that is so deep in some spots they sink right up to their bellies.

There is other wildlife that can be spotted in the area too, including multiple bird species, coyotes, bighorn sheep and occasionally even a wolf or bear might wander across the meadow too. When you aren’t watching the animals or out hiking, you’ll be able to look forward to multiple outstanding dining experiences here, from breakfast and the build-your-own bag lunch buffet to its famous afternoon tea and the lavish home-cooked dinners. 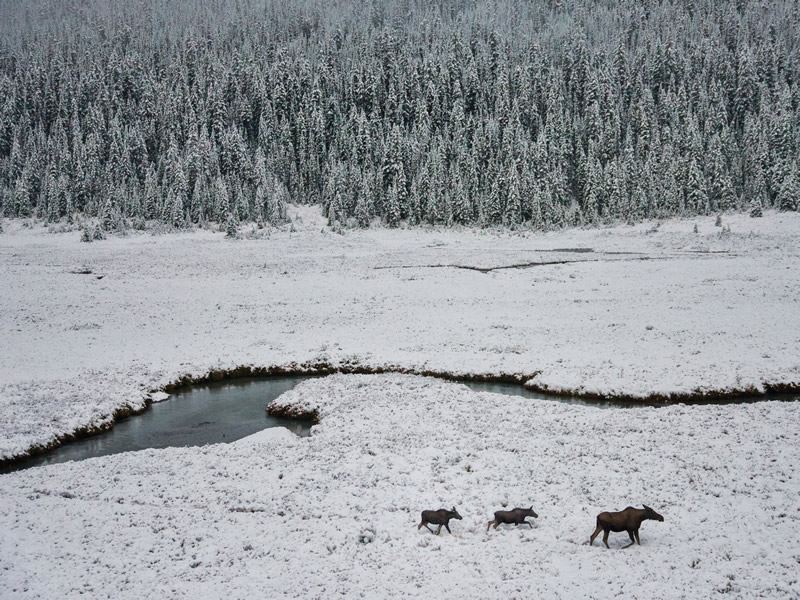 While it may seem a bit too touristy for some, taking a wildlife safari brings one of the best opportunities for viewing a wide range of animals in Alberta as expert guides know just where to find them. Discover Banff Tours offers the Evening Wildlife Safari as it’s one of the best times to view them in their natural environment. Animals are spotted 95% of the time, from grizzlies that are feasting on berry bushes, to mountain goats perched high atop a ridge and elk making their way across a clearing.

If you have your heart set on seeing grizzly bears, the Discover Grizzly Bears tour will bring you to meet a bear named Boo in his 20-acre Rocky Mountain habitat where you can watch him hunt, forage and explore while learning about the animal’s behaviour. The tour also includes a visit to Canada’s second highest waterfall, Takakkaw Falls, the dazzling waters of Emerald Lake that are brilliantly coloured by limestone powder, and a gondola ride to the top of Kicking Horse Mountain Resort for lunch with a view in Canada’s highest restaurant. 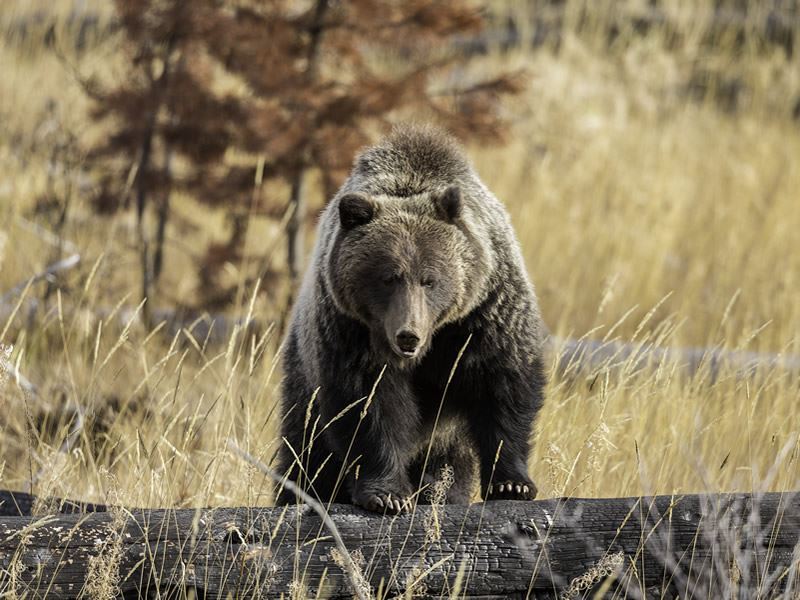 One of the best areas to spot mountain goats is just off Icefields Parkway, named by National Geographic as one of the world’s most scenic drives. The animals are drawn to steep mountain ledges that keep them away from the mouths of predators, and hiking many of the trails here brings the chance to witness them. They can often be seen right off the side of the road at the aptly named turnout called ‘Goats and Glaciers.’ There are over 53 species of mammals and more than 260 bird species in this area – also be on the lookout for black and grizzly bear, bighorn sheep, elk, woodland caribou, bobcat and lynx.

The scenery is just as awe-inspiring with waterfalls, dramatic mountains, turquoise lakes, and, glaciers. View the Columbia Icefield and even hike to the toe of Athabasca Glacier in Jasper National Park. The largest of the six ‘toes’ that make up the icefield, here you’ll be able to witness the effects of climate change first-hand, with the melting ice having exposed raw bedrock. The glacier has lost over half its volume in the last 125 years. 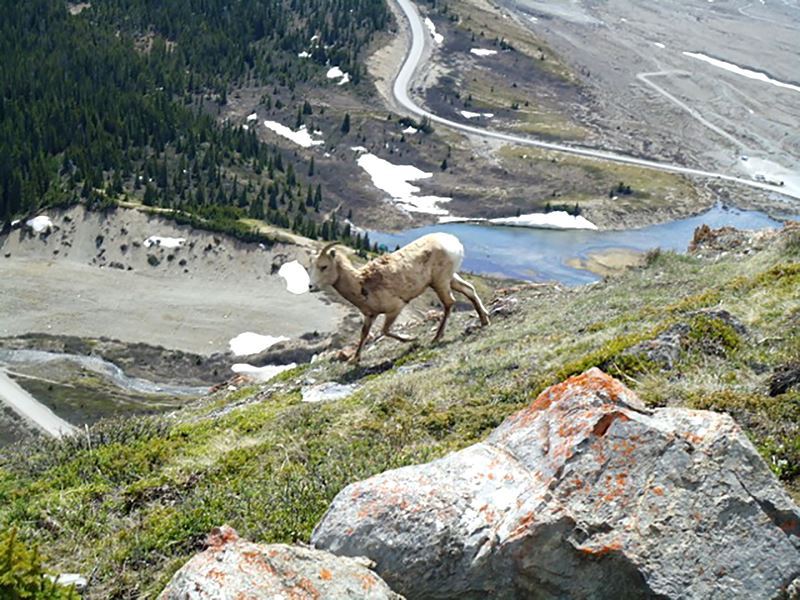 Waterton Lakes National Park is known for its unique topography that makes it a hotspot for wildlife, with its mountains rising around dramatically straight out of the grasslands. It boasts a collection of plants, wildlife and habitats that are so unique it’s been called one of North America’s most biologically diverse places. Just 195 square miles in size, yet it’s home to elk, moose, bear, lynx and some 250 species of birds.

Autumn is an ideal time for wildlife watching and photography in the park, with September bringing the ultimate opportunity during the annual Waterton Wildlife Weekend. This is when expert professional photographers help visitors take the most impressive photos of wildlife, like the gathering of more than 1,000 elk that migrate through the area. The animals can often be heard bugling and seen jousting right at roadside, while hundreds of golden eagles are migrating south for winter overhead. 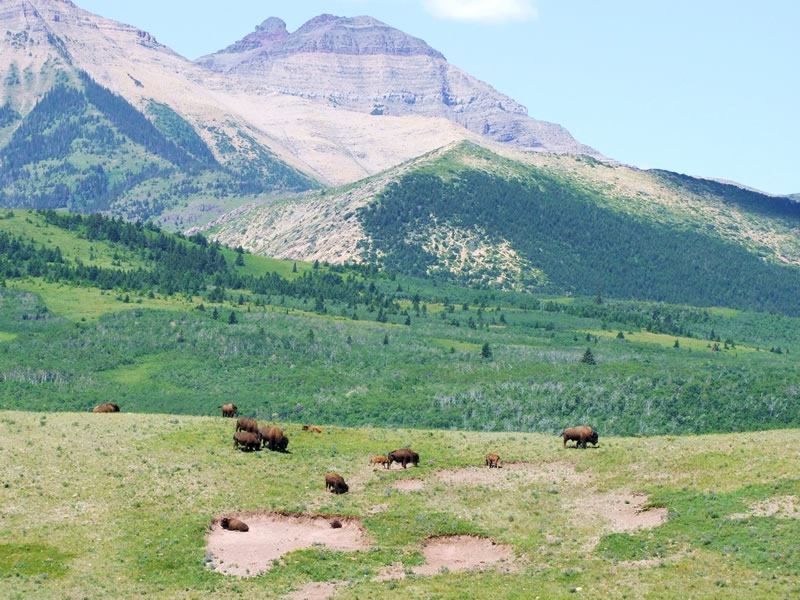 Wood Buffalo National Park is the place to go to witness the continent’s largest land animal, the wood bison, with mature males weighing as much as nearly 2,000 pounds. There are more than 5,000 of the creatures roaming across this 17,000-square-mile park, the second largest national park in the world, stretching across Alberta and the Northwest Territories. The park is also home to many other animals, like moose, timber wolves, black bears, bald eagles and spotted owls, as well as serving as the only natural nesting habitat for the endangered whooping crane. 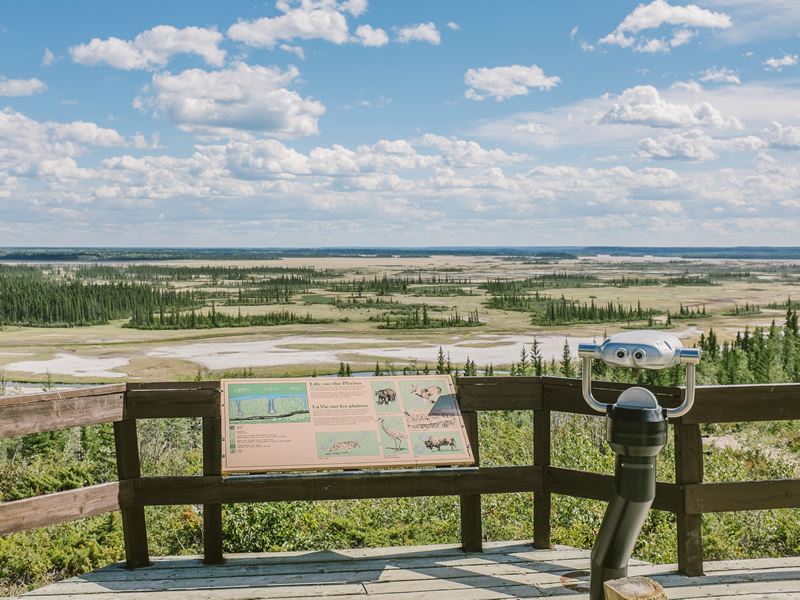 Get close to eagles, owls, falcons and more at the Alberta Birds of Prey Centre

If you’re fascinated by birds of prey and would like to get up close to the animals instead of peering at them from behind binoculars, visit the Alberta Birds of Prey Centre. The largest facility of its kind in Canada, it sits on a 70-acre wetland area near the town of Coaldale where the wheat-filled horizon stretches as far as the eye can see. The facility cares for injured birds year-round, and it also helps to educate the public while providing a fascinating eco-tourism attraction. The site includes an easy walking tour along pathways that wind through the wetlands and open forests, where birds like falcons, owls, eagles and hawks can be seen sitting on their perches. Staff provides training and various exercises as part of the birds’ rehab process, and visitors can watch the programs to learn more about the habitat and lives of the birds. 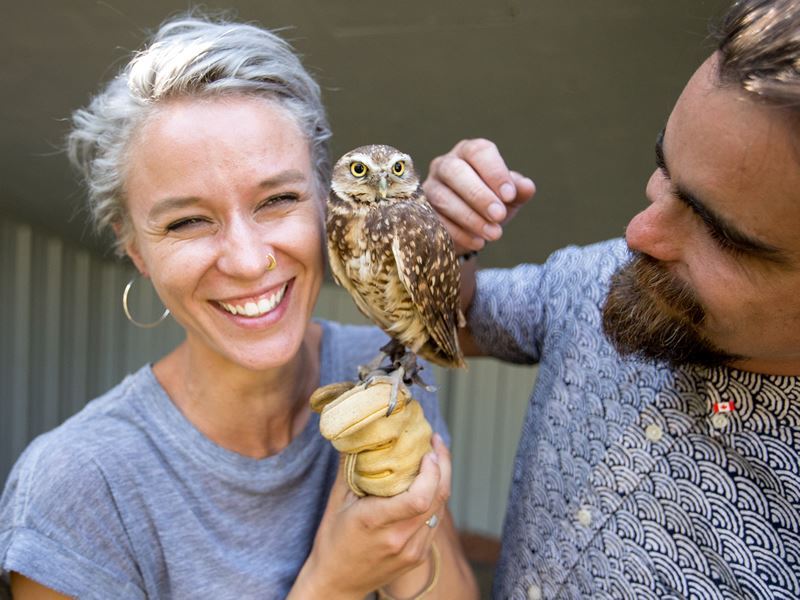