Every traveller’s bucket list should include seeing the Aurora Borealis, or the Northern Lights as they’re more commonly referred to, at least once in their lifetime. This magnificent natural lightshow is created when solar particles enter the Earth’s atmosphere, and upon impact, emit burning gases that produce brightly coloured lights. The breathtaking display can last anywhere from a few minutes to several days, and is something you won’t soon forget.

The closer you are to the North Pole the better your chances are for viewing, and as Canada is so far north, it’s really no surprise that it’s one of the best destinations to see the dancing lights across the sky. When winter arrives, bring your cold weather gear, your cross-country skis or snowshoes and head out to where viewing is at its very best. 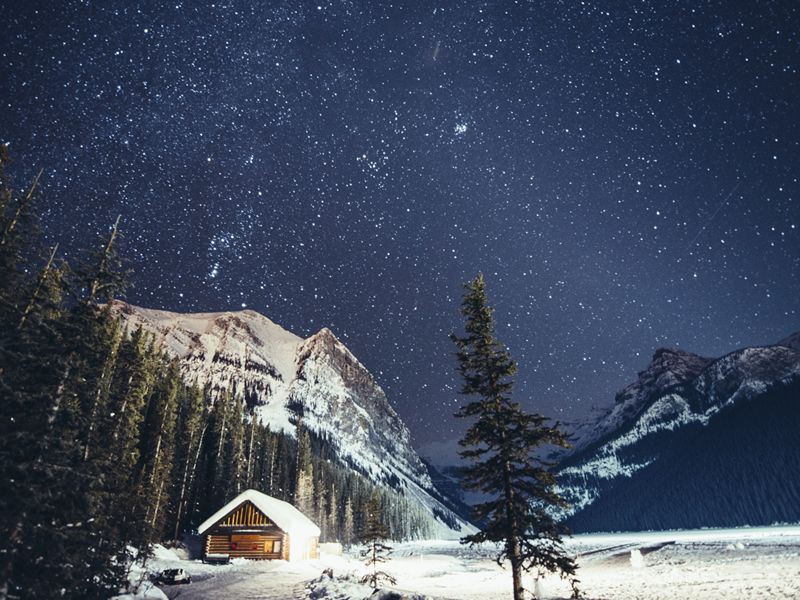 While there are many places in the country that you might spot them, the western province of Alberta is ideal, with its dark night’s sky bursting into a blaze of colours from September through April, particularly in remote areas like Jasper National Park. Ninety-seven percent of the 10,878 square kilometres (4,200 square miles) was officially designated light pollution-free as the world’s second largest sky preserve in 2011 by the Royal Astronomical Society of Canada. 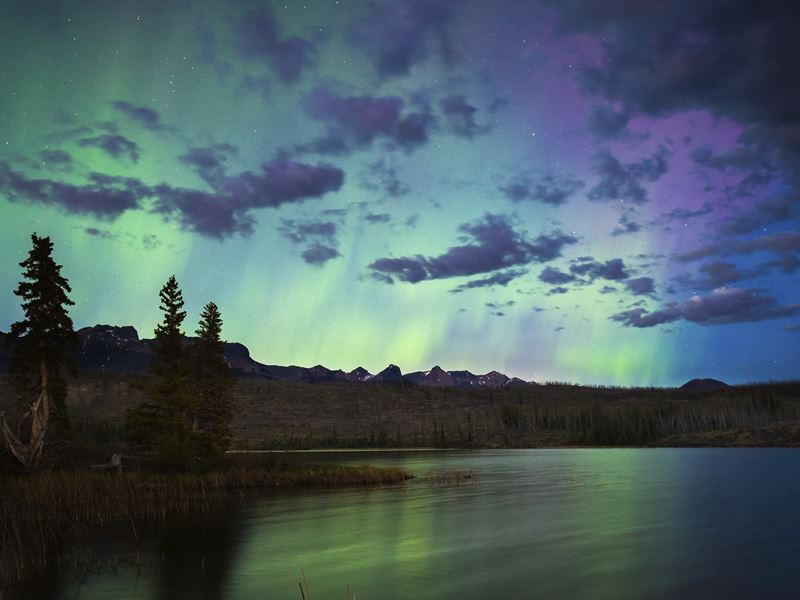 On a clear night you’re just about guaranteed to enjoy stellar stargazing no matter where you are, which also means you’ve got a front row seat for some of the best Northern Lights watching on the planet. Jasper is unique in that it has a town in the middle of it, and under the ambient glow of city lights, it can be difficult to see much more than a smattering of stars, but in just minutes you can be out in the pristine wilderness, gazing up at the dazzling green, red, purple and white rays of light.

Jasper National Park also offers a wide range of camping options, which makes it an ideal place for cosying up next to the campfire and getting mesmerised by the brilliantly lit sky, with countless shining stars year-round, and the chance to see the Northern Lights too, when conditions are right. Marmot Meadows at Whistlers Campground is one of the best places for sky watching, along with the beach at Lake Annette near Fairmont Jasper Park Lodge and the bridge to Pyramid Island. Venture just a little farther from town, you can see the stars – and, perhaps the colourful lights of the aurora, reflected in the glassy waters of Maligne Lake. 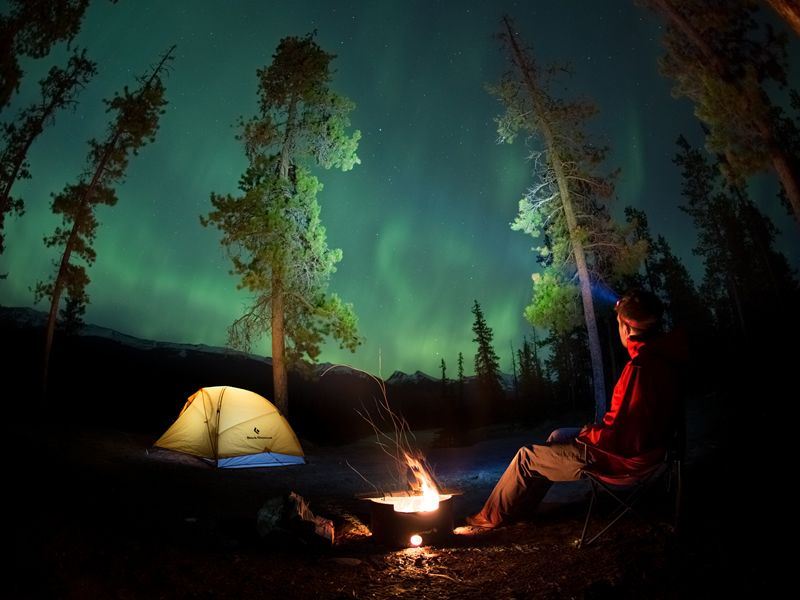 While the Jasper Skytram typically closes before dark, every few weeks in the spring, summer and fall, visitors can ride up to the top of the mountain for special stargazing sessions, with guided tours of the sky offered from North America’s highest altitude telescope. In partnership with its planetarium, there are guided stargazing sessions provided by SunDog tours, where participants can look through a massive 16” mirror telescope along with a number of other telescopes for checking out the planets and the moon. Just imagine seeing the rings of Saturn while peering through the lens – it’s an entirely different experience from viewing them in photos or on your television screen.

Serious stargazers may want to plan on going in October to attend the Dark Sky Festival, a celebration that draws thousands to celebrate the area’s spectacular astronomical wonders. It includes a host of activities and attractions where you can learn about the constellations and even find out the best way to photograph the stars. It features a kids’ fair, dining in the planetarium and under the stars, live planetarium shows, open-air concerts, presentations by astronomers, astronauts and other guest speakers, and more. Each year there is something new, and with so much going on, you’ll find something for the whole family. Some of the top scientists, astronomers, educators, story tellers and night photographers in the world make presentations every year. If you’re into photography, it’s a definite for your bucket list, as you’ll find lots of experts more than willing to help and give advice, including how to set your camera up to capture the most incredible images of the stunning night sky.

But Jasper isn’t the only place you can experience an impressive star and/or light show. The province lies far enough north that the Aurora is sometimes seen at its southern end in Cypress Hills Interprovincial Park. In fact, it was the very first designated dark sky preserve in Alberta, thanks to its high elevation and lack of urban light pollution. 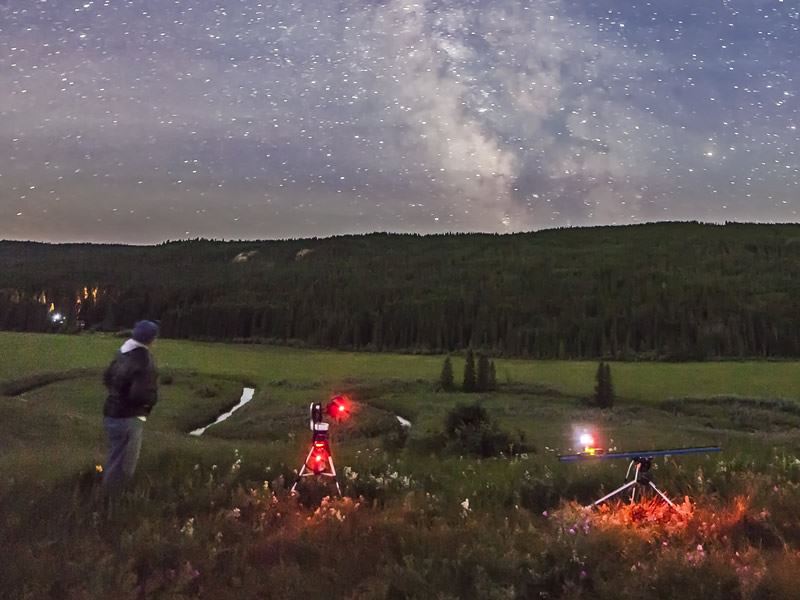 Only about 45 minutes east of Edmonton, Beaver Hills, which encompasses Elk Island National Park and adjacent Cooking Lake-Blackfoot Provincial Recreation Area, also boasts a dark sky preserve with very little artificial light. Against the inky black skies, you’ll see some of the most vibrant colours imaginable, with ribbons of neon yellow, hot pink and fluorescent green darting out among the brilliant sparkle of the stars. In late spring and summer, stargazing around the campfire here is out of this world. In September, the preserve hosts a “grand finale” for the season with its annual Star Party. It takes places over two days at two different locations and features volunteer astronomers that will help point out the stars with solar and night sky viewing, along with special presenters and guest speakers.

Located under the southern edge of the auroral oval, Fort McMurray in northern Alberta is another one of the world’s best spots for Aurora viewing. The farther north you go, the greater the odds of seeing the lights, and it sits some 1,014 kilometres (630 miles) north of Jasper. Alta-Can Aurora Tours features Aurora Borealis tours that bring visitors to the prime viewing locations here. All-inclusive packages include accommodation, meals, professional photography tips and more.

If you want to include a variety of unique outdoor adventure, Lens on Nature offers an amazing experience in one of Albert’s most isolated and northern communities: Fort Chipewyan, which sits on the western shores of Lake Athabasca near Wood Buffalo National Park about 223 kilometres (139 miles) north of Fort McMurray. Participants are immersed in the region’s spectacular remote beauty, history and culture, while taking part in three days of professionally guided adventure including dog sledding, snowshoeing, historical tours and the opportunity to see the Northern Lights. 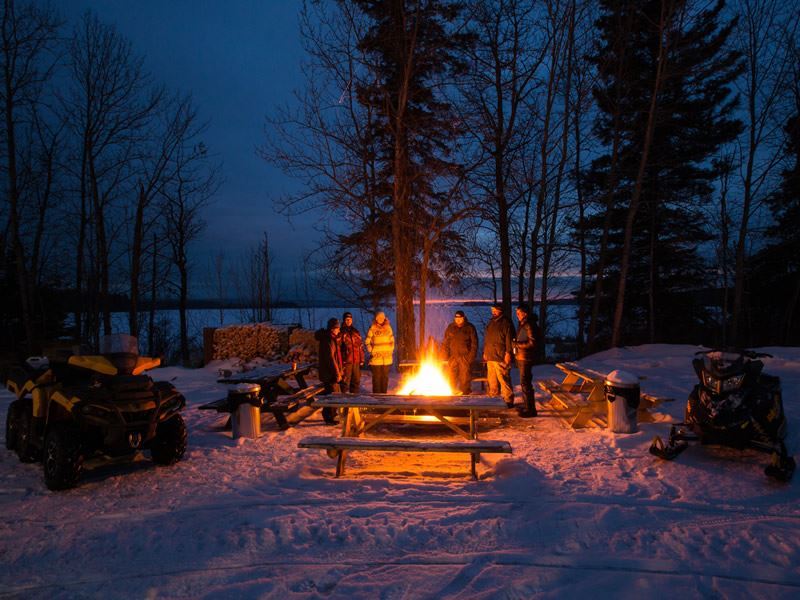 Whether you take a tour or not, there are some things you should know in order to best enjoy Alberta’s impressive night skies.

Get a good stargazing app

Mobile star maps, astronomy aids and other apps can bring some of that wonder down to earth and directly into the palm of your hand – there are so many they outnumber telescopes by the hundreds. Night Sky 4 on iOS is a beautiful app that delivers an impressive augmented reality sky map where you can view thousands of stars, satellites, planets and constellations – if you have an Apple Watch you can even hold it up an identify what you see in the sky. Star Chart or Sky Map are free for Android devices, while StarWalk is another good one for iPhone users. It not only allows you to explore more than 200,000 celestial bodies, but it contains extensive information about the constellations and stars you find.

Know where to go

Remember, the closer to the North Pole you go, the better your chances are for viewing the Northern Lights. You don’t have to stick to the places we’ve mentioned, but you do need to stay away from cities as light pollution interferes with viewing – an unobstructed view of the northern horizon is a must. 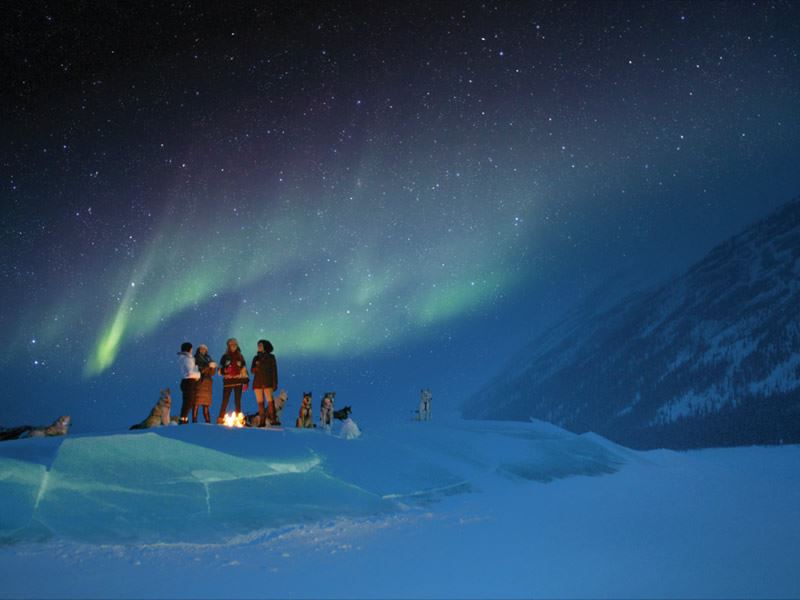 Check the weather and the Aurora forecast

Viewing the Aurora is also dependent on weather. It is best seen on a cold, clear night when the moon isn’t full. However, there is even more to it than that – just because you head out in the middle of winter on a clear night doesn’t mean you’ll see anything. But you can check the Aurora forecast, measured by the NOAA Space Prediction Center on a scale of 0 to 9 – the higher the better. To do so, visit the Space Weather Prediction Center website or download one of the many apps onto your smartphone, such as My Aurora Forecast.

Plan to stay up late

In this case, the early bird doesn’t get the worm. The Northern Lights are a night owl’s friend as they most often appear between 10 p.m. and 2 a.m., with peak viewing time around midnight. 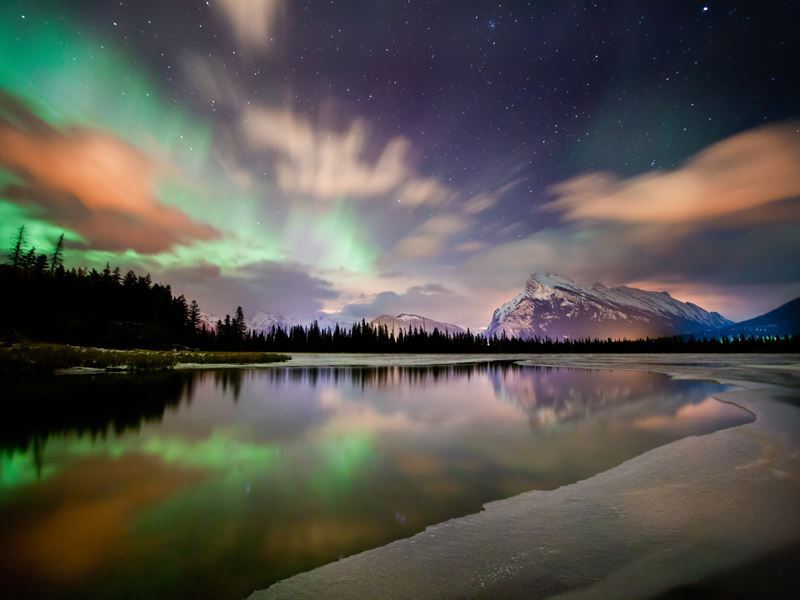 ...lots of patience and dress warmly. Even if you plan to enjoy stargazing in the summer, be sure to wear appropriate clothing, as it can get chilly at night in Alberta. You also need a quality LED headlamp that includes safety white as well as red to preserve night vision. Most of all, bring lots of patience – the show often starts out faintly with bands of green-white light that stretch east-west, then it can start to intensify in what may be seconds, minutes or hours, with what will hopefully be a dramatic display of colourful lights. 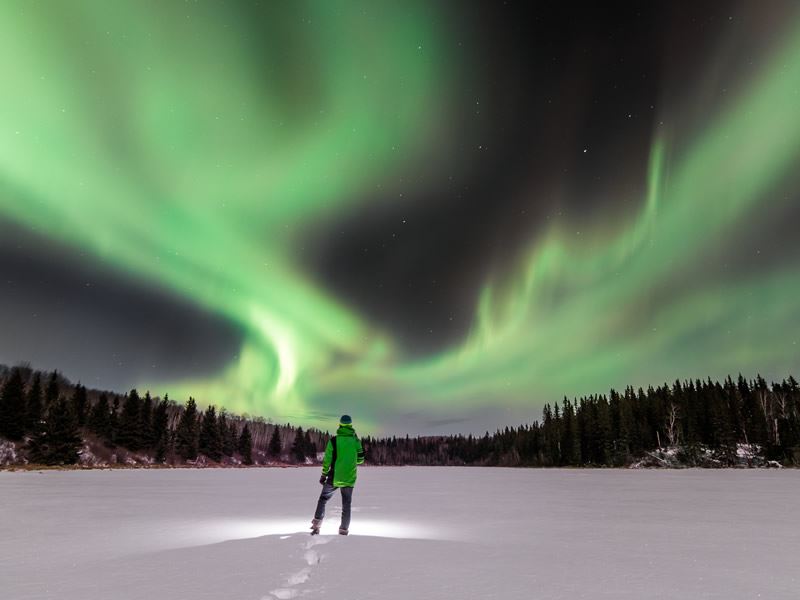