A quick hop, skip and a jump north across the United States border and you’ll find yourself in Canada and if you thought that the USA was fun then check out this legendary location which promises as much natural beauty and awesome things to do as you can hang a Mountie’s hat on.

First off, sandwiched between the Pacific Ocean and the Rocky Mountains lies the west coast province of British Columbia with the likes of Vancouver and Victoria always proving to be excellent choices when it comes to city breaks.

Switch sides and head east for a more sophisticated and almost European approach to city life with Montreal and Toronto effortlessly combining award-winning architecture with a certain sense of Joie de vivre which makes for a fabulous prospect no matter what you’re into.

For many, Canada is all about the beautiful scenery and the incredible range of wildlife however, discount this country’s cities at your peril as from Niagara Falls to Calgary, there’s a whole lot more to excite and enthral without even mentioning maple syrup covered waffles.

If you’re looking to find out more about what Canada and her cities have to offer then check out our top 10 city breaks in Canada below as there’s never been a better time to head north and right here is where you take your first steps. 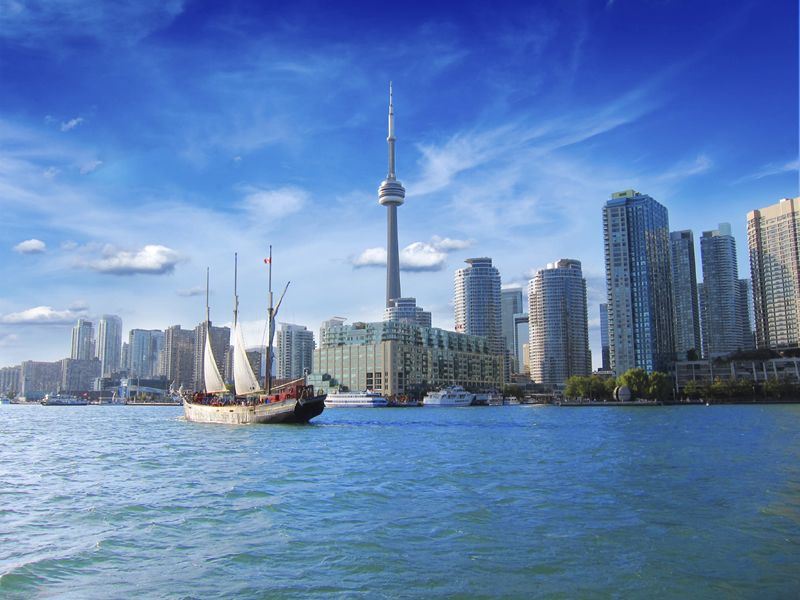 If you’ve never heard of the Maritimes before then this is pretty much where Canada stops and the Atlantic begins with as many rugged shoreline views as hearty seafood suppers. Nova Scotia is one of three Maritime provinces and the capital, Halifax, is an excellent choice for a city break if you’re intending to blend coastal scenery with cultural heritage. The Maritime Museum, the Citadel Fort and several other historic buildings make central Halifax a fascinating place to explore however, it’s often closer to the ocean where most visitors tend to flock. One such scenic spot is Peggy’s Cove which is a tiny fishing village on Margaret’s Bay (about 25 miles from Halifax) which features a famous lighthouse, beautiful views and lots of finger-licking good lobster rolls. 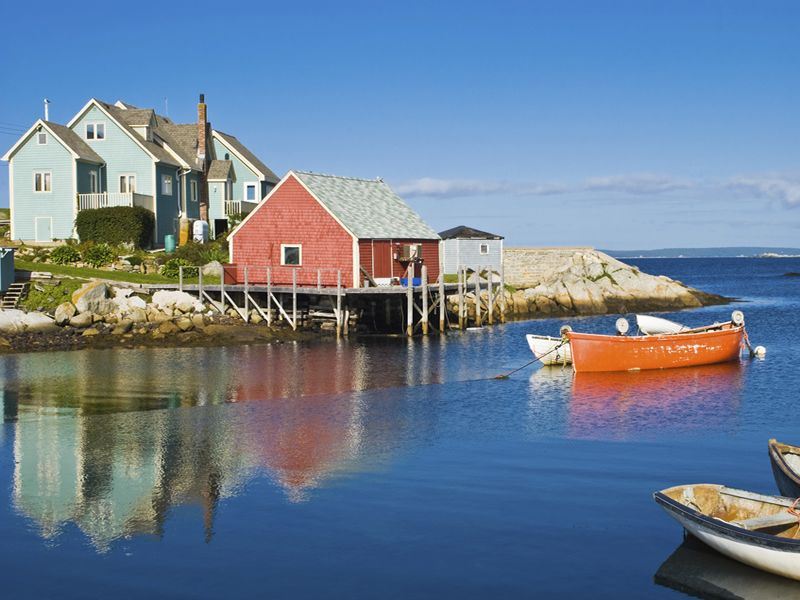 Thanks to the untouchable banks of the North Saskatchewan River which runs through the city, Edmonton is able to boast North America’s longest connected area of city park which is great news if you’re looking for places to picnic whilst on a city break. The Alberta location means that Edmonton gets more than its fair share of sunlight which also goes some way to keeping the locals happy and active all year round. Golf, skiing and watching pro-sports, such as: hockey and lacrosse, all add to the convivial atmosphere and as Edmonton is also known as Festival City (art, music and raft races), you’ll be well advised to pick your visit depending on what’s on the local events calendar. Museums or galleries, theatres or bars, you name it and Edmonton has a great selection of things to do. 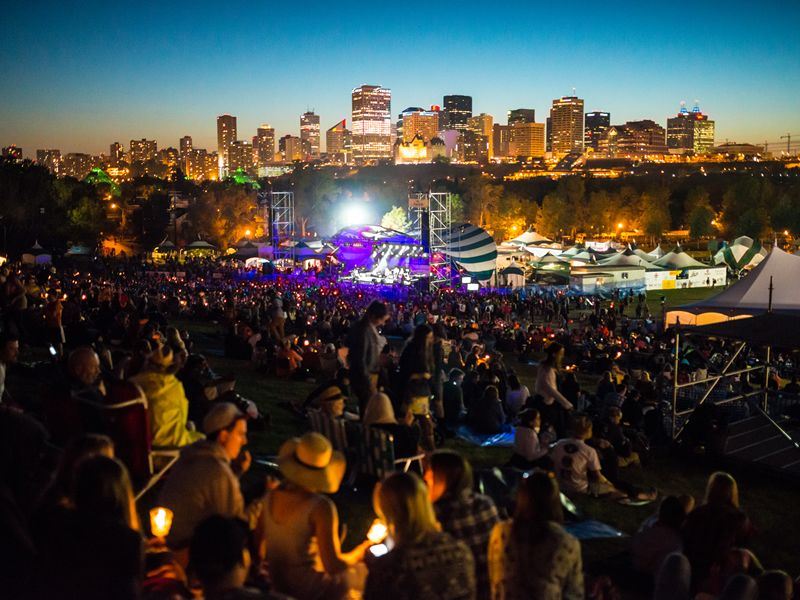 As the capital of Canada, you can expect to find a whole heap of impressive architecture, museums, galleries and towers adorning the banks of the River Ottawa and as such this is an excellent base from where to stage a city break. Ottawa's superb public transport system, featuring a light railway, makes getting around super easy and if you’re into your bike riding then there are loads of cycle lanes to help you get around on two wheels. Once you start to explore you’ll soon understand the importance of the river with a series of bridges and canals (the Rideau is the oldest of its kind in North America) producing a picturesque and relaxed European city feel, as well as the largest ice rink on the planet come the winter months. Contemporary photography, aviation and national heritage are all covered within the city’s museums and if you’re looking for sustenance then head to York Street which is the location for Canada’s oldest open-air farmers’ market, the ByWard. 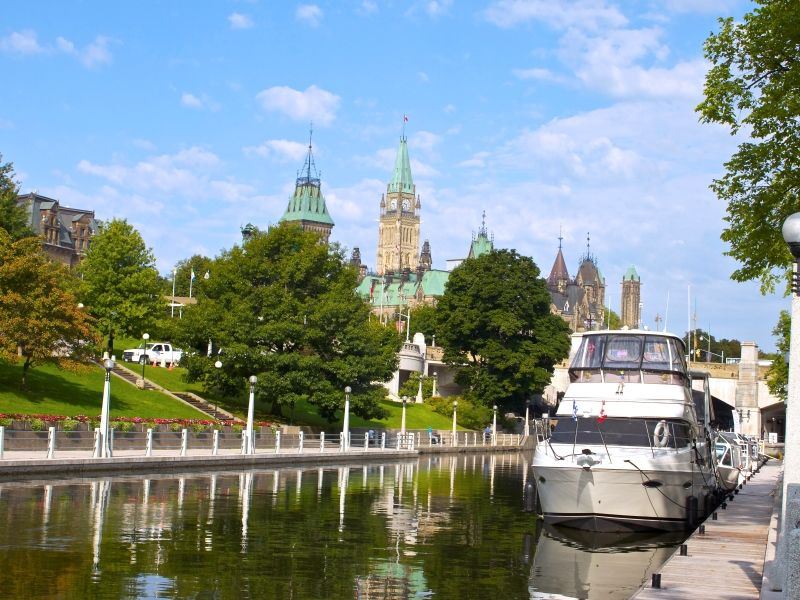 Another of Alberta’s finest collection of city sights can be found at the meeting point of two rivers (Bow and Elbow) and if you’re wishing to rekindle a little ski resort nostalgia then Calgary was the host for Canada’s first ever Winter Olympics way back in ’88. These days the city is as much revered for its multiculturalism as for snow-covered slopes and you’ll find a wide range of stores and restaurants offering all manner of delights to keep you going on a city break. Numerous theatres, performing arts centres and live music venues make Calgary a great place to visit during festival season with everything from folk and fringe to choral and comedy combining to bring the city to life. The national sports hall of fame, a heritage park and no end of shopping malls and soaring towers provide loads of options for visitors and come the snow fall there’s no better city in Canada to get your ski, board or skates on. 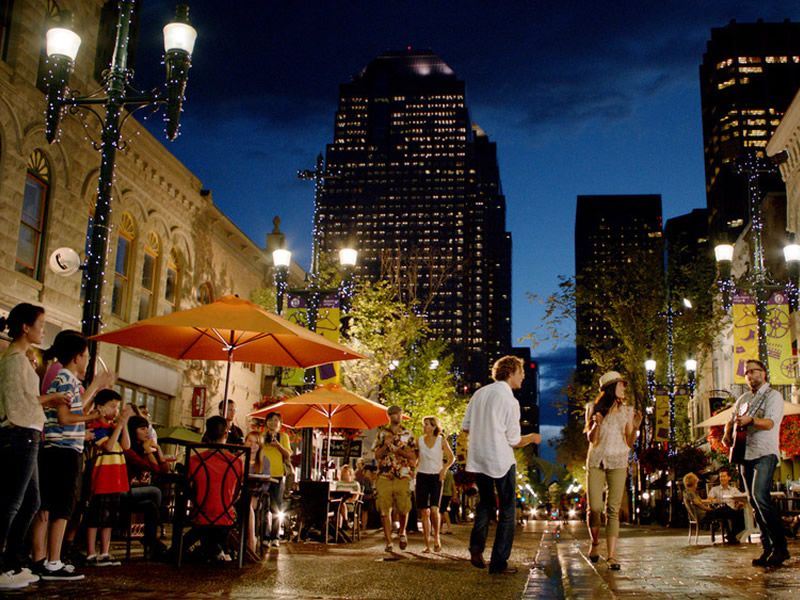 Any trip to British Columbia on Canada’s west coast will undoubtedly centre around the imposing landscape of the Rocky Mountains however, head offshore a short distance and you’ll soon find that it’s the swells and marine life of the Pacific that often taken prominence. Vancouver Island is one such spot where the ocean can be seen in all its glory and no city is this more in evidence than BC’s capital, Victoria. Boasting a succession of options for getting out onto the ocean from the Inner Harbour area as well as numerous pubs, clubs and restaurants in the downtown district it’s easy to see why Victoria is an instant draw for tourists and an extremely worthy destination for a city break. Market Square, Chinatown and the Old Town are all big draws if you fancy a stroll and if it’s shopping that you’re hoping for then head to the Bay Centre Mall and all your retail wishes will be granted. 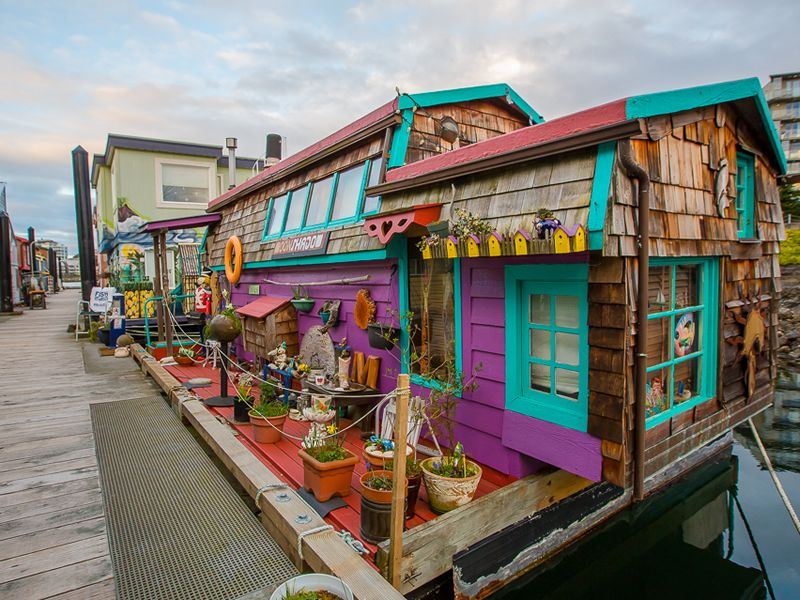 Obviously, there’s pretty much just one reason why most visitors come to Niagara Falls however, once you’ve checked out the tumbling water feature, what else is there left to do on a city break? Quite a lot actually and thanks to the aforementioned main attraction the city has flourished and produced no end of restaurants and entertainment centres to make the most of the inevitable stream of crowds. Botanical gardens, butterfly houses and aviaries all go some way to showing off the flora and fauna of Ontario and there are numerous walks and trails to help you get closer to nature as well as finding out more about the local heritage. If you prefer your city breaks on a more contrived level then Niagara won’t let you down as from MarineLand aqua park and a Ripley’s Believe it or Not museum to a couple of casinos and an IMAX cinema, there’s plenty of fun to be had aside from donning a plastic poncho. 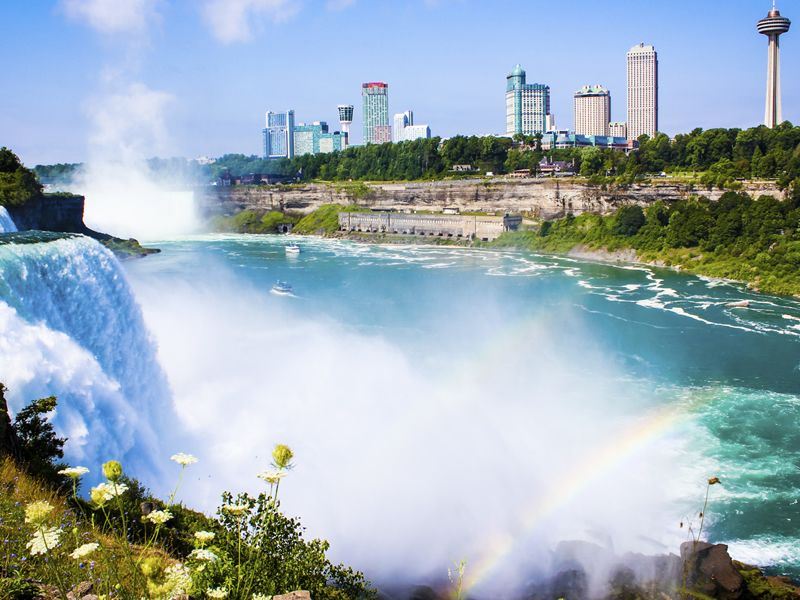 With a magnificent château and succession of ice castle sculptures to be found during the city’s winter carnival it’s no shock to learn that Québec City is a great option for anyone looking for a city break in Canada that’s somewhat reminiscent of a European equivalent. In fact, the old country influences don’t end with the architecture and you’ll find plenty of creperies, hot cider stalls and bistros to help you fend off the cold outside of the summer months. Of course, you could always head inside if things get too chilly with museums, featuring fine art and the history of civilisation, always providing sanctity and cultural enlightenment. However, as Québec City has almost 40 of Canada’s recognised National Historic Sites, including the Notre-Dame Cathedral and the only remaining city ramparts in North America, it would be rude not to get out and about and a trip to the continent’s only genuine ice hotel (Hotel de Glace) is always worth rubbing your hands for. 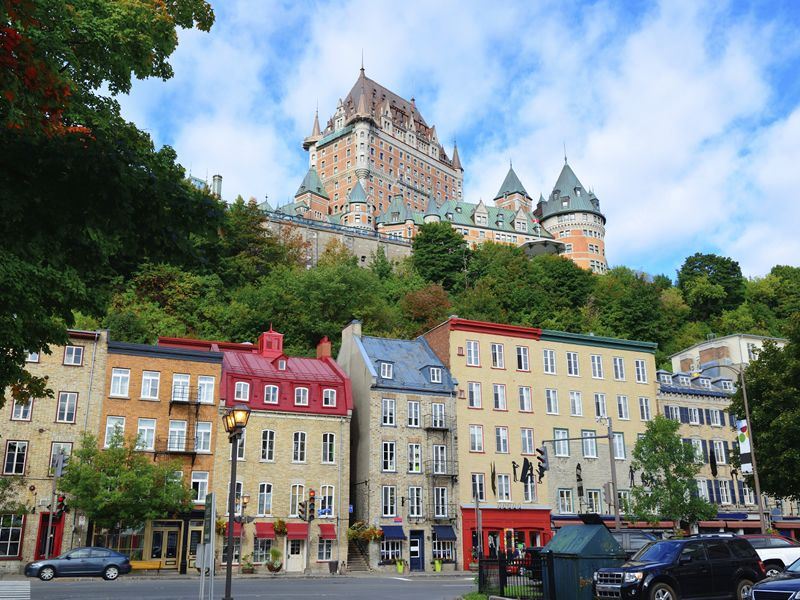 Another of Quebec’s world-famous locations for an urban break is Montreal and nowhere in North America will you feel closer to France than in Canada’s second largest city. Brandishing the accolade of UNESCO City of Design will enable you to quickly surmise that Montréal is a sophisticated and stylish hub with expressions of European grandeur in both its architecture and within its inhabitants. Many of Montreal’s most notable structures can be found within the Old Town district where you’ll find the City Hall, Old Port, Place d’Armes and the Bonsecours Market all vying for your attention on a cultural sightseeing tour. After all that architectural elegance it’s always good to relax and admire the view from afar and Mont Royal Park, which features lakes, woodland and a sculpture garden, is a great place to picnic within the shadow of the hill which gives the city its name. 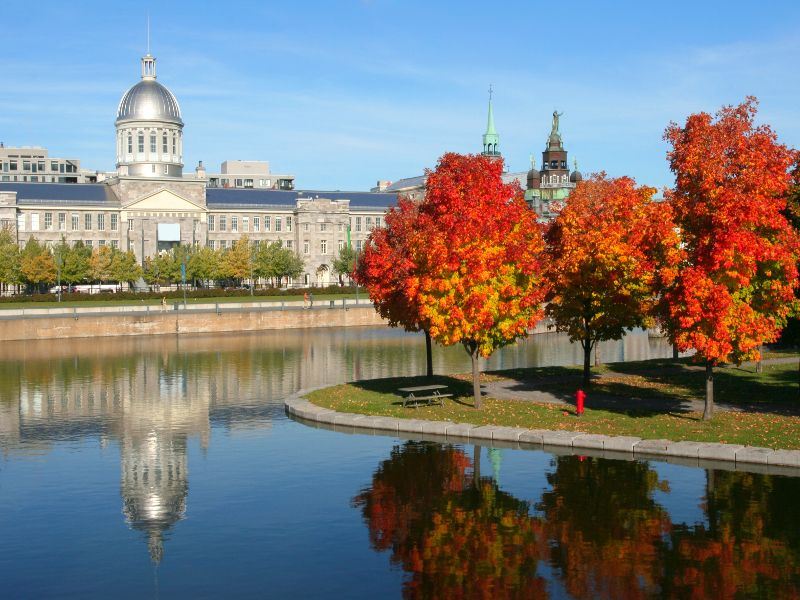 A quick whisk back to the west coast will bring you to one of the ‘most liveable’ cities on earth and from the night life of Gastown to the incredible surrounding scenery, Vancouver is quite rightly up there with the best of them. One of the top places to combine urban lifestyle with the natural world is Stanley Park which offers just over 1,000 acres of loveliness including everything from an aquarium to a sea wall which is ideal for runners, cyclists and rollerbladers so watch your heels. Aside from the outdoor fun and games there’s nothing that the locals like more than sponsoring the arts with theatres, galleries and film sets all commonly used in and around the city. With plenty of clubs, bars and restaurants to help you while away a night on the tiles the Granville Entertainment District is probably the best place to head to however, Gastown and Davie St are always worth a look too so get out there and see what works for you. 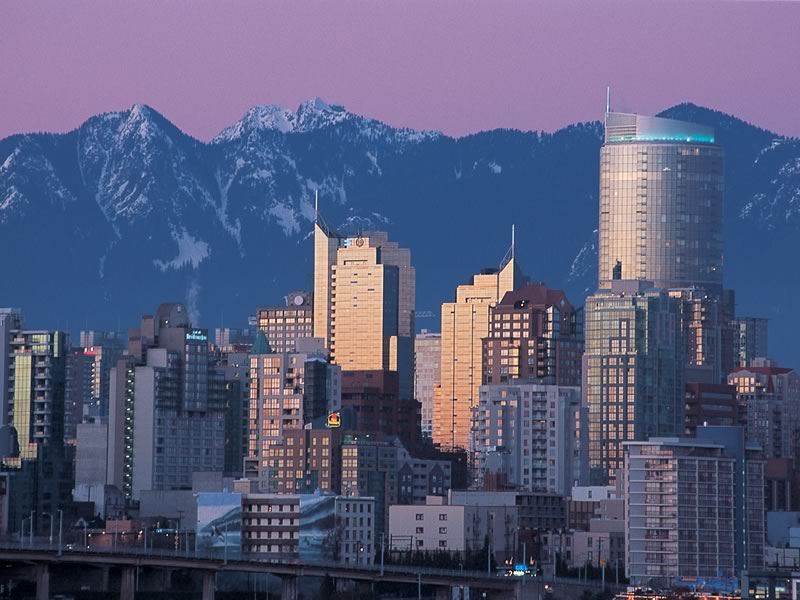 The capital of Ontario is truly blessed with a shoreline to rival coastal equivalents and thanks to almost 30 miles’ worth of Lake Ontario lapping against Toronto’s edge this is an excellent spot for a urban break with a difference. Ferry rides to the car-free islands that can be found just offshore are always a great day out and with plans to build a pedestrian tunnel in 2014 there’s no excuses for escaping the city. However, why would you want to? Toronto’s got such an amazing array of things to see and do that you’ll be hard-pushed to know where to start. Downtown is the city’s historic hub and includes Kensington Market which is rumoured to be amongst the most photographed and best loved places in Canada and ideal for hanging-out and watching the world wander by. Aside from the multi-cultural feel of KM, Toronto also has plenty of other pockets of ethnicity with Little Italy, Little India, Chinatown and Greek Town all pushing for the top spot for cultural customs and culinary quirks. Museums span across natural history, modern art and ceramics; whilst heading to the Eaton Centre Mall will help you lose a few hours as you browse more than 300 stores spread over five floors. Beaches, parks, theatres, the Hockey Hall of Fame and a zoo present just a few more reasons why Toronto is a worthy chart topper when it comes to Canadian city breaks.