Top 10 things to do in Saskatchewan

Known as the “Land of the Living Skies”, Saskatchewan is the prairie province fuelled by active sand dunes, golden wheat fields, majestic boreal forest, rolling farmlands, superb national parks, and an almost infinite chain of lakes. We discover the 10 best things to do in Canada’s lesser-known northern wilderness that astounds with a simple beauty. 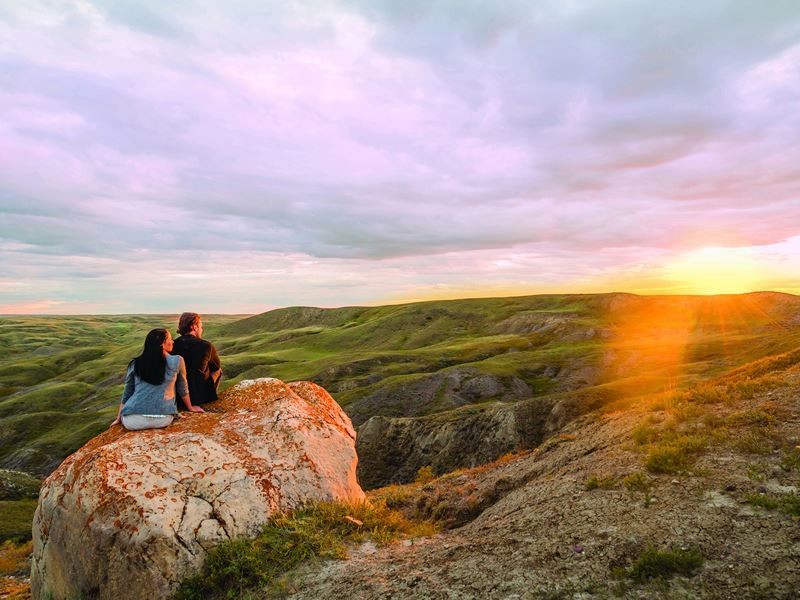 Seek out urban thrills in the city of Saskatoon

Where: On the majestic South Saskatchewan River.

What: Owing its namesake to the Cree word misâskwatômina that’s used to describe the dark violet-coloured berries that grow in the area, the city of Saskatoon (nicknamed the “Paris of the Prairies” for its striking bridges, quaint riverside, and cute downtown core) is stealthily gathering cred. Most make a beeline to this forward-thinking metropolis for its hip foodie scene, shopping, annual festivals (there’s 65), and arts venues - most famously the Village Guitar and Amp Co. in Riversdale and the Persephone Theatre at River Landing. Must-dos include stocking up on farm-fresh produce at Saskatoon Farmer’s Market, taking a river cruise on the Prairie Lily paddleboat, and watching an open-air movie at Friendship Park on a hot summer evening.

Highlights: The soon-to-open addition to Saskatoon’s skyline is the Remai Modern Art Gallery of Saskatchewan - a gleaming $80.2-million museum on the shores of the South Saskatchewan River (it won an Award of Excellence from Canadian Architect magazine before construction even started). Measuring 11,582-square-metres, the gallery will house over 8,000 artworks, including the world’s largest collection of Picasso linocut prints and 23 of his ceramic works. 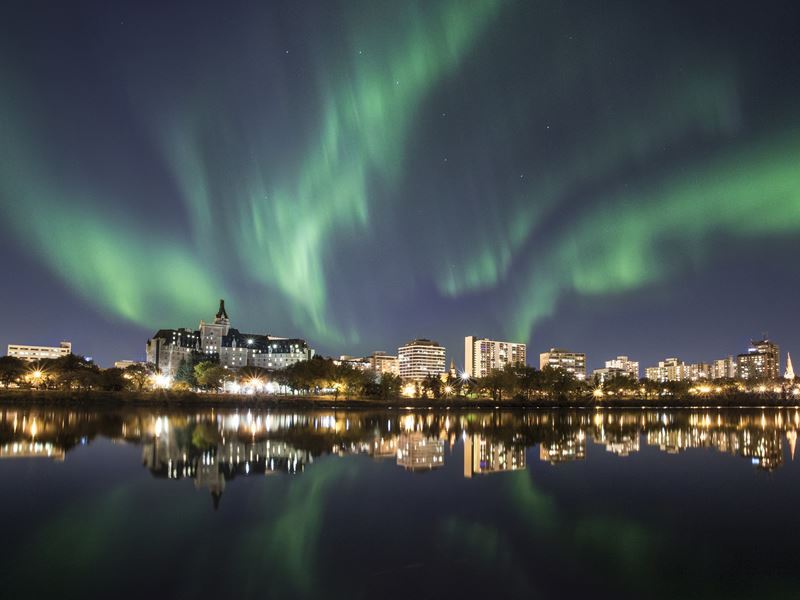 Where: On Penner Road, three miles north of Saskatoon.

What: Built around 21 Northern Plains peoples' pre-contact sites, this 6,000-year-old archaeological park is on its way to being a UNESCO World Heritage Site in the next three years as $40-million renovations get underway. Serving as a living reminder of the peoples' sacred relationship with the land, it comes with four educational trails, archaeological digs-in-progress, an amphitheatre for  First Nations’ performances (dance, song, storytelling, plays), and a series of free workshops for drum-making and tipi-building. There’s also exhibit halls for computer-activated displays, multimedia shows, and contemporary Native Canadian art, as well as a restaurant for traditional First Nations cuisine created with locally-sourced ingredients.

Highlights: If you fancy pitching up here for the night, Pe kapaysik Miykowapi (Come and Spend the Night) tipi sleepovers are organised in the Opimihaw Valley where the creek meets the South Saskatchewan River. You’ll get First Nation stories around the campfire, a choice of educational programs, baked bannock with hot chocolate, and even breakfast in the morning. Available from May to September only. 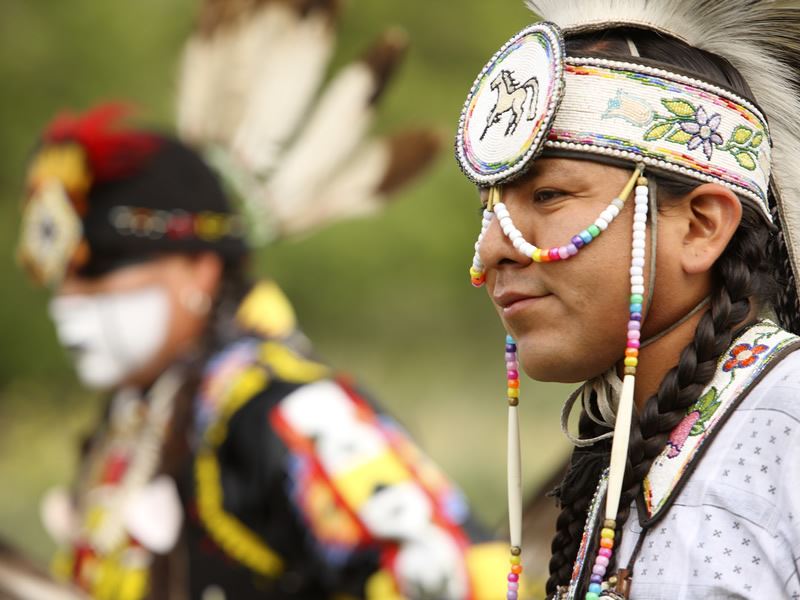 Where: At 5907 Dewdney Avenue in Regina.

What: It’s all scarlet tunics, Stetson hats and big black boots at the RCMP Heritage Centre in the capital of Regina. Located on the doorstep of RCMP Academy’s "Depot" Division (the only Royal Canadian Mounted Police training academy in the country), this slick Arthur Erickson-designed building highlights the history of the 144-year-old police force- Canada’s version of the FBI. Anchored by the evocative "March of the Mounties", the story is told through six core exhibits: Creating a Mounted Police, Maintaining Law and Order in the West, Protecting the North, Serving all of Canada, Preserving the Tradition, and Cracking the Case. There’s also attention-grabbing interactive displays and exhibits as well as a 45-minute Sunset-Retreat Ceremony (Tuesdays; July to mid-August) where you can watch RCMP cadets performing cavalry drills.

Highlights: Built in 1833, the gable-roofed RCMP chapel (also known as Building 13 and the Chapel-Mess Hall) is worth a peep for its interesting stained glass memorial windows. Another must-do is the Sergeant Major's Parade to watch the Mounties strut their stuff in full dress uniform as they are put through their paces by drill staff (Mondays, Wednesdays, and Fridays at 12:45pm). The centre opens daily from 11am to 5pm. 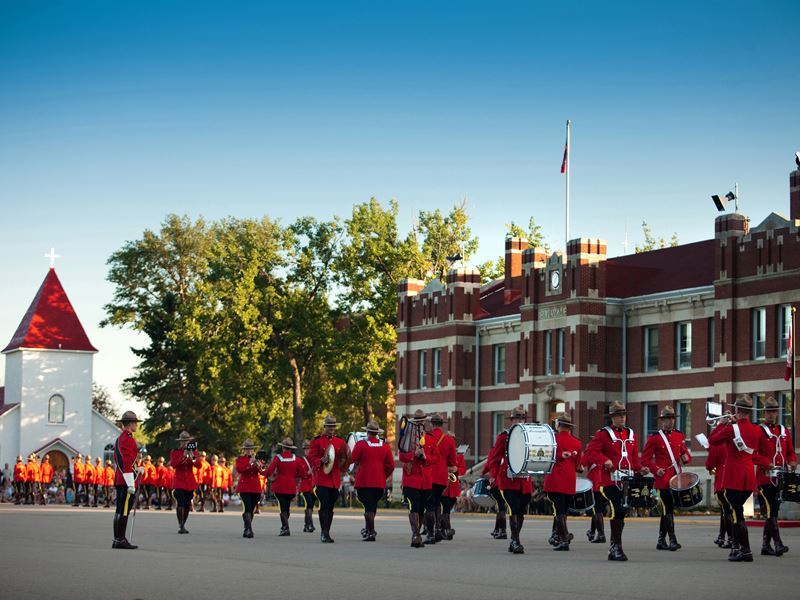 Ride the rapids of the mighty Churchill River

Where: Flowing through northern Saskatchewan.

What: For seasoned canoeists striking out on their own, nothing beats Churchill River - the 1,600-kilometre-long heritage waterway that runs across Saskatchewan's boreal forest zone. Used by the First Nations people for centuries as a fur-trading route, it now draws fearless paddlers from across the globe - all of whom are eager to ride the raging white water rapids. Along the route, keep your eyes peeled for moose wading in the shallows, Bald Eagles, American Pelicans and Great Blue Herons flying overhead, and even the odd black bear wondering along the shore. There’s also numerous First Nations rock painting sites for intriguing red ochre pictographs of humans, animals and symbols that have survived the test of time.

Highlights: Accessed only by floatplane or by canoeing 21 miles east from Stanley Mission on the Churchill River, the 10-metre-high Nistowiak Falls along the river's central route in Lac La Ronge Provincial Park it’s one of Saskatchewan’s highest - and arguably its most beautiful. Head to the base fishing camp (known as Jim’s Camp) on the west side of the Rapid River and hike the well-trod trail to the viewpoint at the top to watch the water cascading over the cliff face. 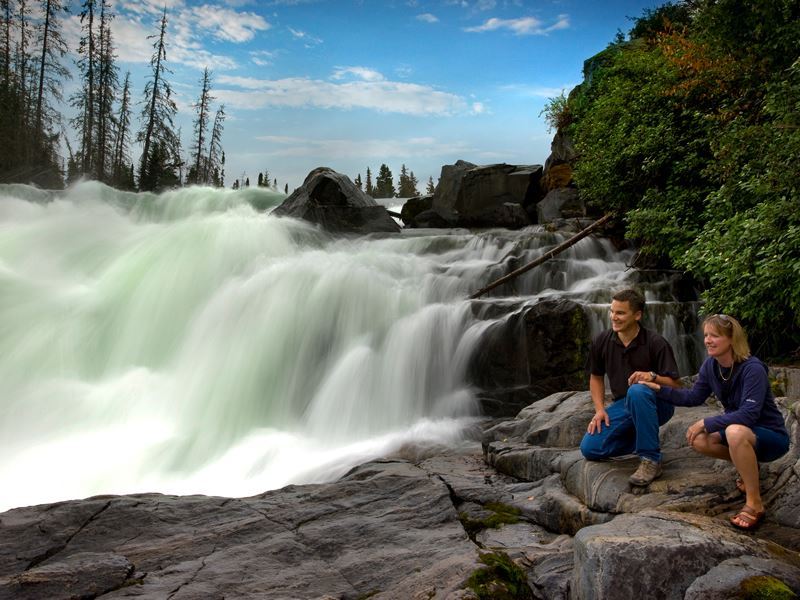 Be dazzled by the Athabasca Sand Dunes

Where: In the far reaches of Saskatchewan’s northwest corner.

What: It’s one Insta-worthy moment after another at this giant sandpit that stretches around 60 miles along the south shore of Lake Athabasca. Known as Canada’s “most unlikely landscape”, the Athabasca Sand Dunes are the world's most northerly set of dune fields and Canada's largest active sand surface. Accessed only by floatplane, you can expect dunes of up to 98-feet-high in an ecosystem that’s unusually made up of wetlands and boreal forests. Estimated to be 8,000-years-old, scientists reckon these unique geophysical formations are the result of glacial activity that ground the local Athabasca sandstone into sand. But the Dene People’s legend about a giant spearing a beaver that ground the earth with its tail is far more interesting.

Highlights: In 1992, Athabasca Sand Dunes Provincial Park was established to protect and preserve the dunes, the fragile environment, and rarest of plants (some of which are found nowhere else on Earth). For adventurous types who fancy scaling this remote wilderness either alone or on an guided-tour, there’s dune buggy, driving, fishing, hiking, white water canoeing, and six designated primitive camping areas available on a first-come basis. 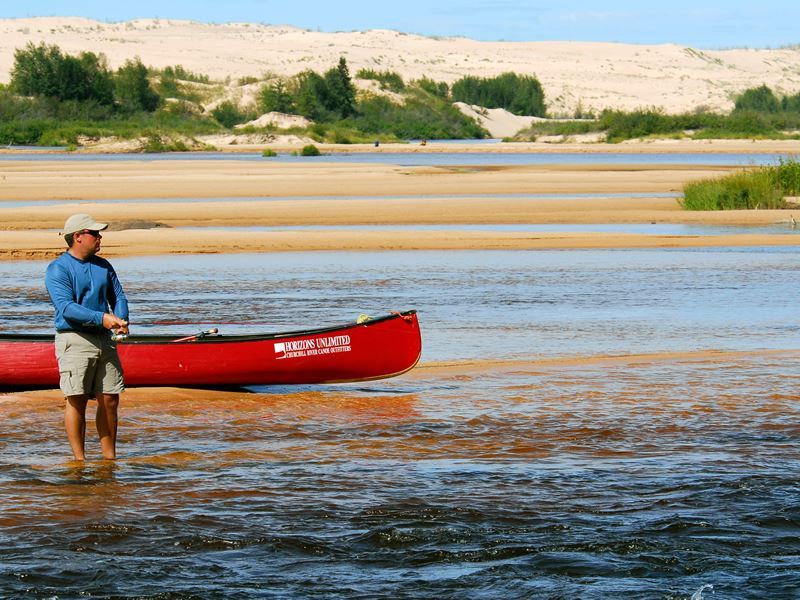 Tee off at the best golf courses

Where: Across the province.

What: While Saskatchewan may not have the longest golf season, it has the most courses per capita in Canada (fact: 288 golf courses for over 1.1 million people). For bragging rights, the Graham Cooke-designed Dakota Dunes Golf Links on the Whitecap Dakota First Nation lands is a must-play for its 240-acres of wind-swept prairie that includes natural sand dune formations, indigenous grasses, and undulating fairways (it was a PGA Tour Canada staple for nine seasons). Further play-worthy 18’s can be found at Cooke Municipal Golf Course in Prince Albert, The Willow’s in Furdale, Moon Lake in Saskatoon, Evergreen in Nipawin, Wascana Country Club in Regina, and Estevan Woodlawn, Elmwood, and Chinook in Swift Current.

Highlights: A Stanley Thompson-designed jewel dating back to 1936, Waskesiu Golf Club in Prince Albert National Park takes maximum advantage of the heavily-forested terrain. You’ll find almost no level lies or water hazards, although there may be the odd bear. And then there’s the famous Lobstick tree just over 100 yards out from the first tee. Arguably one of the most famous trees in Western Canada, it even has a famous match-play event named in its honour. 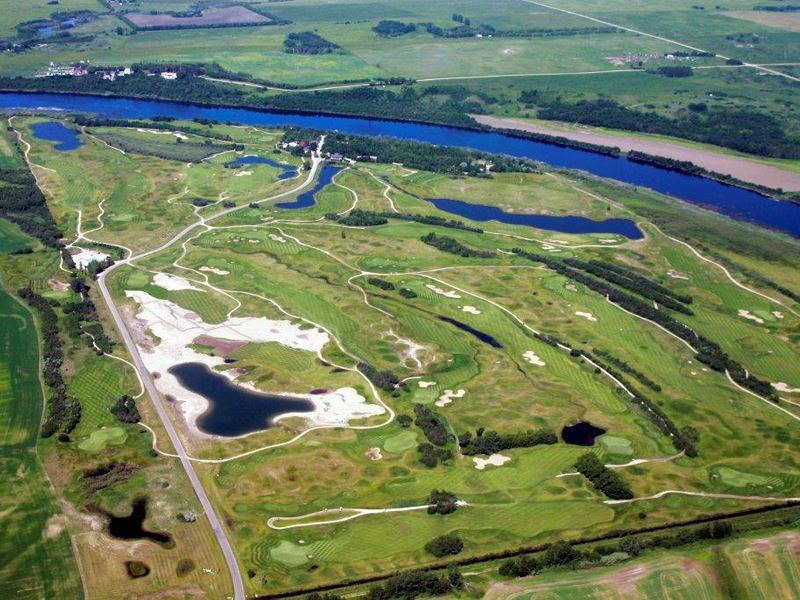 What: In a province famous for over 100,000 lakes, anglers won’t be stuck for fishy thrills. Head to Selwyn Lake on the Saskatchewan-Northwest Territories border to hook trophy lakers, big northern pike and grayling at the catch-and-release fishery, the Saskatchewan River to snag the walleye of a lifetime, or the Saskatchewan side of Cypress Hills for lakes stocked with rainbow trout, brook trout, walleye, arctic grayling, northern pike, and yellow perch. Further hotspots include the humongous Lake Diefenbaker for many species of game fish (walleye, lake trout, sauger, yellow perch, lake whitefish, burbot, goldeye), and the Boundary Dam Reservoir for largemouth bass and, more recently, some mighty big koi fish.

Highlights: Around 60 miles south-east of Saskatoon, Little Manitou Lake (nicknamed Canada’s Dead Sea) is one of three lakes in the world that has a mineral density three-times saltier than the ocean (the other two are in Israel and the Czech Republic). Not only do 27 different types of minerals offer therapeutic treatments to bathers, but they also impart a specific gravity that’s 10 per cent higher than fresh water so you can simply float effortlessly on your back all day long. 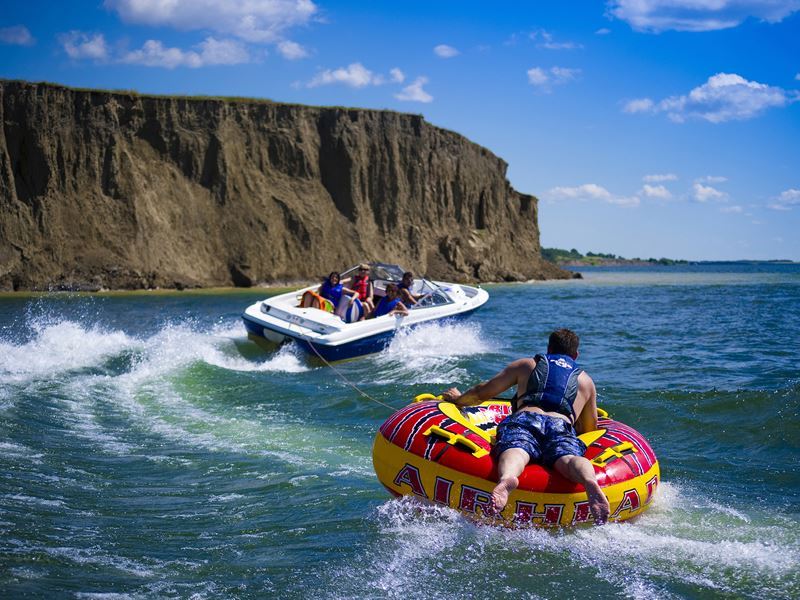 Where: In North Battleford, 90-minutes from Saskatoon.

Highlights: Those heading here in the summer months can enjoy canoeing, kayaking, paddle boarding and paddle boating on the park’s small lake (life jackets are provided). There’s also the brand new 30-minute Side by Side Trail Ride that takes you along the winding trails through the thickwood hills. All activities must to be pre-booked and participants are required to sign a waiver form. 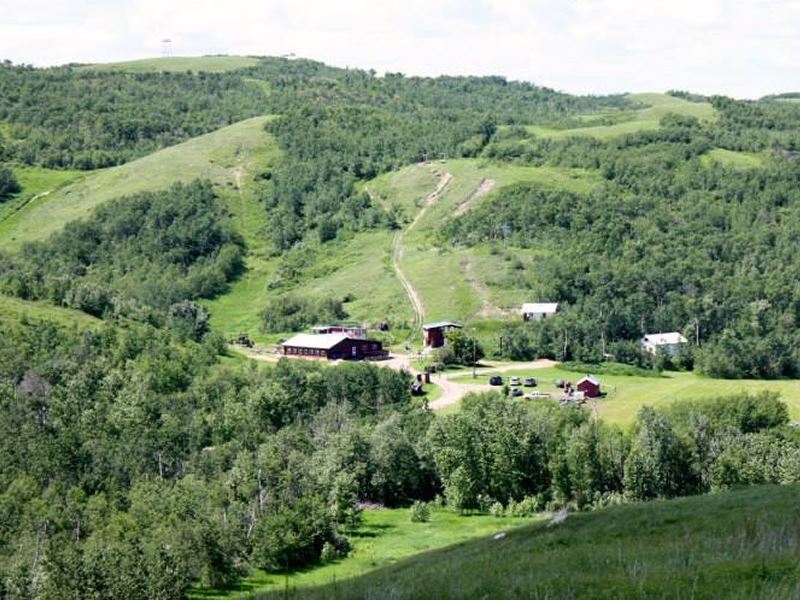 Where: In central Saskatchewan.

What: Named one of Canada’s “50 Places of a Lifetime” by National Geographic, this million-acre park (the most popular of the country’s 54 national parks) has it all: vast prairies, parkland, boreal forest, backcountry hiking trails, free-roaming plains bison, timber wolves, and around 195 species of birds. Given its size, it’s impossible to see everything in one hit, so try to squeeze in several visits. It’s also worth downloading the 1999 movie Grey Owl before you arrive. Starring Pierce Brosnan, it’s a biopic of East Sussex-born author and conservationist Archibald Belaney who adopted the name Grey Owl and pretended to be First Nations. Some of the movie was filmed in the park where this eccentric Englishman lived in a log cabin (now open to the public).

Highlights: The Nature Centre is housed in a heritage building set immediately above the shore at Prince Albert National Park’s Waskesiu Lake. Head here for interactive exhibits, Aboriginal programs, and wildlife-related stuff for kids (books, puzzles, animal costumes, puppets, games, movies, one-off events). Also take one of the guided walks to explore the park’s West Side, the wetlands, and the stunning forests. The centre is open from May to September. 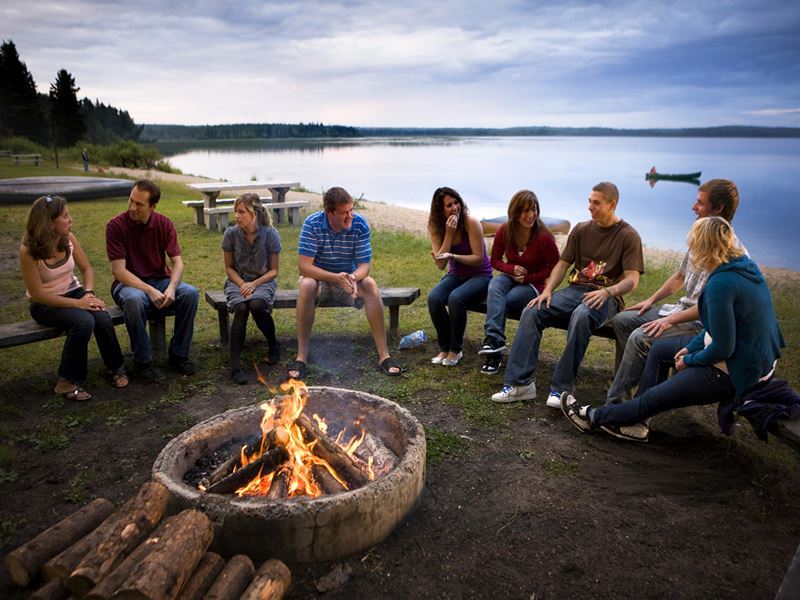 Where: On the Saskatchewan-Alberta border.

What: Spanning the southeast corner of Alberta and the southwest corner of Saskatchewan, Canada’s first and only provincial park is named for the Cypress Hills - the pine-crested highlands that measure 580-metres-high. Once a ceremonial place for Aboriginal people, it’s now a go-to spot for campers, bikers, hikers, skiers, watersports fans, and wildlife-watchers. And it certainly packs a lot into its 400-squared-kilometres: thick forests, wetlands, grasslands, bluffs, shortgrass prairie, and hills that resemble mini mountains. The area is also a Dark Sky Preserve, which means that almost no unnatural light will pollute the sky and impede your view of the stars, planets, satellites, and, even (hopefully) the dancing Northern Lights.

Highlights: Opened in August 2011, the Cyprus Hills Observatory has a Dome Observatory with a 60-seat Yurt classroom, outside telescope platforms, and three telescopes: a 14-inch Celestron and two portable Dobsonians (10-inch and 12-inch). It offers a load of activities that will have you seeing stars as well as programs to educate kids and adults about the universe, environmental protection, and energy conservation. 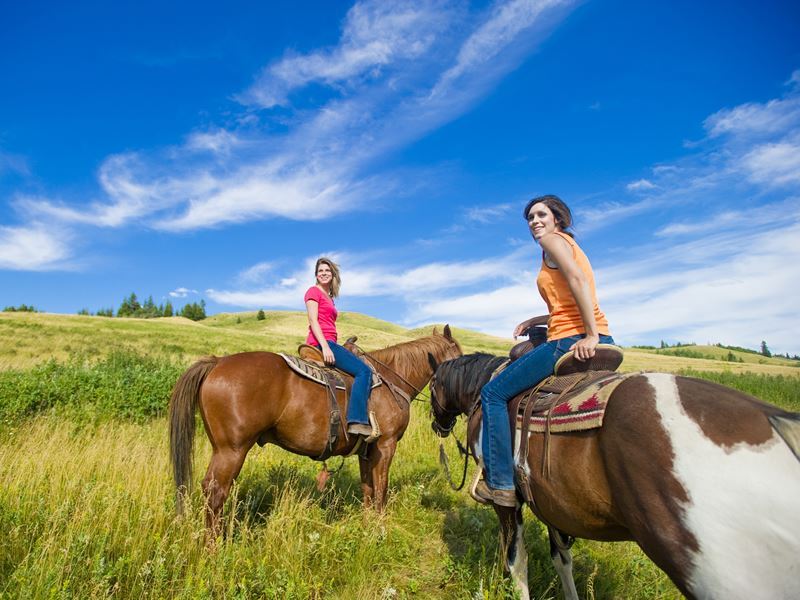