Our favourite things to do while staying in Quebec City

A city of incredible spirit, and just a touch of pride, a Quebec City holiday is sure to be exciting and memorable. Follow our guide for the best things to do in the fairytale-like city of Quebec that exudes European charm. 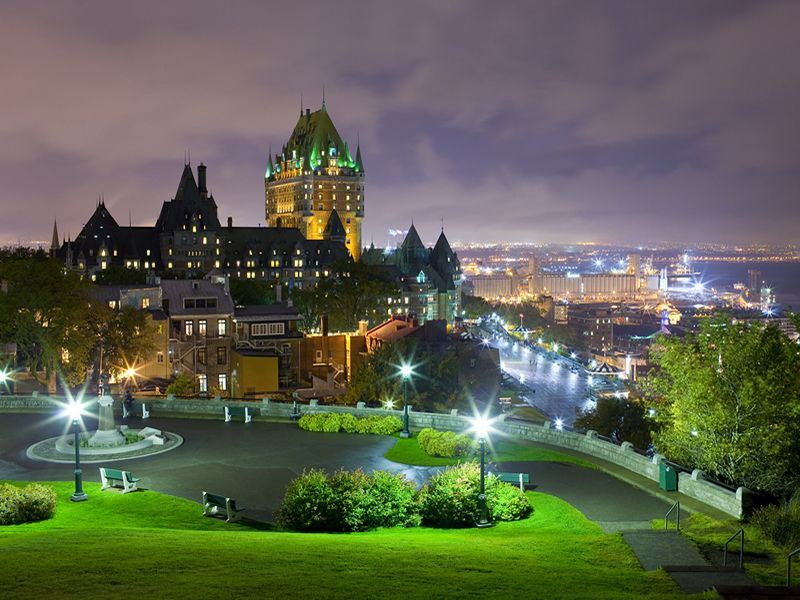 Do time at the Morrin Centre

What: Set in the heart of Old Québec at 44 Chaussée des Écossais, the Morrin Centre was built in 1712 as the city’s first military prison. The building was converted into a civilian prison in the mid-19th century and later became Morrin College, Québec’s first English-language institute of higher education, named after former Québec City mayor Dr Joseph Morrin. Since the late 1800s this impressive heritage site has been managed by the Literary and Historical Society of Québec.

Highlights: Literary lovers can peruse the pages of history in the charming Victorian library which houses masterpieces dating back to the 16th century. For the ultimate historical thrill, take a guided tour of the sinister jail cells to see graffiti carved into the floors by prisoners and iron rings that were used to chain them down. Most fascinating is ‘Doing Time’, a permanent exhibit dedicated to the building’s history as the Québec City Common Gaol (1808-1867) that depicts the life and times of the people who were imprisoned there between 1813 and 1868. Tickets cost £5.20 for adults and £3.90 for children.

What: Located at 634 Rue Saint-Jean in Downtown, Erico’s Chocolate Museum is a quaint chocolate boutique and chocolate museum that has been manufacturing chocolates since 1987. Visitors can peer through the kitchen window to watch chocolatiers at work before entering the small exhibition hall to learn about the ‘bean to bar’ production process. There are over 200 chocolate-related artifacts dedicated to the history of chocolate from Mayan times to the present day, including a list of how to say the word ‘chocolate’ in 19 different languages.

Highlights: Salivating chocoholics can sample freshly-made chocolates which have been hand-dipped and artistically drizzled to perfection. Stock up on decadent chocolate truffles, rosettes and exquisite filled chocolates - or head to the cafeteria for delectable hot chocolate, cakes, ice creams, cookies, brownies and cupcakes. The museum-cum-store is open daily and there is no entrance charge. A box of six assorted chocolates costs £5.70 and a box of 32 costs £25.78. True connoisseurs should invest in Erico's Chocolate Pots which are made with maple wood handles and cost £84.50.

Take a trip back in time at the Museum of Civilization

What: First founded in 1856 and once known as The National Museum of Man, Québec City’s sizeable Museum of Civilization is located on the shores of the Ottawa River, directly across from Parliament Hill. The current building is a visual and cultural masterpiece, created by Canadian architect Douglas Cardinal in 1989 using a flowing curvilinear design style. There is approximately 270,000 square-foot of display space spread over four floors featuring permanent and temporary exhibitions dedicated to the histories of Canada and world cultures.

Highlights: The Grand Hall is the architectural centrepiece; it features the world’s largest indoor collection of totem poles and displays a ‘wall of windows’ that spans 112 metres in length, affording superb views of the Ottawa River. Equally impressive is the First Peoples Hall, an imposing space divided into four zones with exhibitions that highlight the cultural, historical and artistic achievements of Canada's First Peoples. The museum also houses the IMAX® theatre and the Canadian Children's Museum where the permanent exhibition - The Great Adventure - encourages children to participate in an interactive round-the-world ‘voyage’.

Join the National Assembly at the Parliament Building

What: Inspired by the design of the Louvre in Paris, the eight-floor Parliament Building was built by architect Eugène-Étienne Taché between 1877 and 1886. Located in Québec City, on top of Parliament Hill, the building became a designated historic site by the Government of Québec in 1985. The Parliament Building is home to the National Assembly, the meeting place of Québec’s 125 elected representatives known as MNA’s.

Highlights: Visitors are introduced to the inner workings of Québec’s parliament on a 30-minute free guided tour that starts at the Parliament Building Visitors Centre. History buffs can delight in the detail of Québec’s parliamentary institutions and marvel at the Second Empire style architecture of the Parliament Building and its many works of art. Most excitingly, the sittings of the National Assembly and its standing committees are open to the public. To attend an Assembly Sitting you will need to reserve a special pass by calling the Information Service in advance (Québec City area: 418-643-7239). Those attending parliamentary proceedings must adhere to a strict dress code which states that attendants must be ‘dressed modestly, neatly and tastefully’. 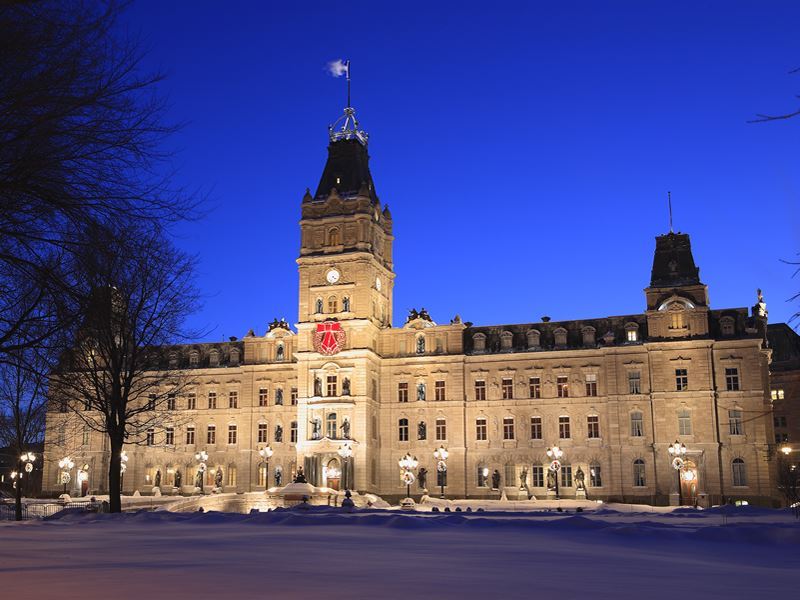 Feast on gourmet cuisine at L'Initiale

What: Located at 54, Rue Saint-Pierre in the Old Port of Québec, L'Initiale is housed in a wonderfully preserved centuries-old former bank building. With an esteemed Relais and Chateaux designation, this gourmand's dream is not short of accolades; it has been honored by Chaîne des Rôtisseurs - the world's oldest international gastronomic society - and has also earned five diamonds from the Canadian and American Auto Associations (CAA/AAA).

Highlights: Owner-chef Yvan Lebrun heads up the kitchen in this 40-seat eatery where high ceilings, ornate moldings, columns and cornices compliment minimalist décor, soft lighting and a chocolate brown and white colour palette. Lebrun’s motto is ‘simplicity and precision’; the result is impeccably presented contemporary French cuisine. There are two dining options: the thematic a la carte menu costs from £51; the elaborate tasting menu starts from £84. Open for dinner from Tuesdays to Saturdays and for lunch on Thursdays and Fridays, the innovative menu champions local ingredients and includes dishes such as cream of goose liver with green apple, halibut filet meunière, seared foie gras and dandelion honey ice-cream.

What: Located at the southwestern end of Battlefields Park, Musée National des Beaux Arts de Québec (National Museum of Fine Arts of Québec) houses Canada’s largest national art collection. Founded in 1933, the site itself is a spectacle; two historic buildings (one of which is part of an abandoned prison dating back to 1867) are united by the soaring glass-roofed Grand Hall that acts as a gateway to the museum.

Highlights: Over 37,000 works of art are housed in 12 galleries which are divided into three time periods; the beginnings of Québécois art, the European-influenced modernist period up to 1945, and figurative and abstract art from the mid-20th century onwards. One gallery is dedicated entirely to the works of Québec-born abstract expressionist and surrealist Jean-Paul Riopelle - included in the exhibit is his masterpiece L'Hommage à Rosa Luxemburg, a 40-metre long triptych made up of 30 individual paintings. Browse the Brousseau Inuit Art Collection and marvel at works by some of Québec’s greatest visual artists, including Jean-Paul Lemieux, Paul-Emile Borduas and Armand Vaillancourt. 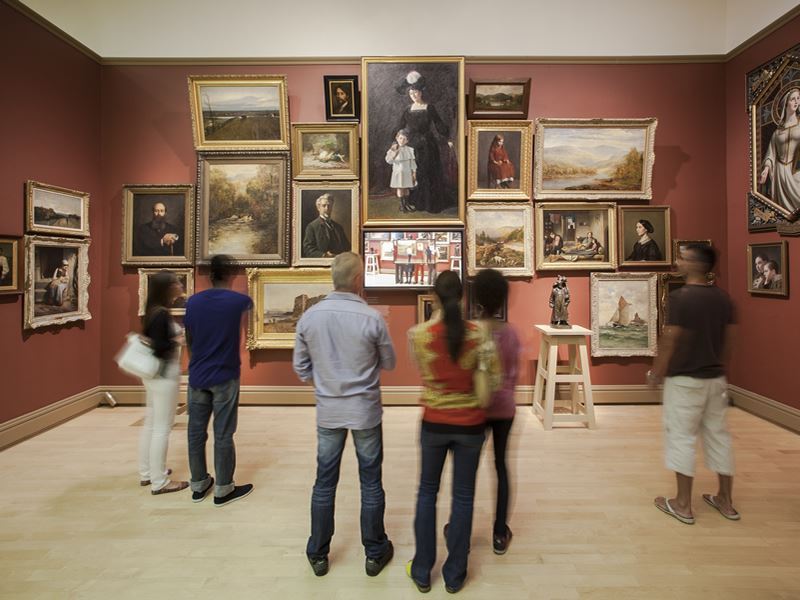 What: Widely considered to be the birthplace of the French colony and the French Canadian community, this picturesque plaza in Old Québec was where Samuel de Champlain (known as the ‘father of New France') built his first ‘habitation’ in 1608 that was part fort and part village. Filled with period buildings, quaint boutiques, art galleries and restaurants, this was once the town’s marketplace and the centre of business and industry. At the plaza’s heart is a striking bust of Louis XIV, donated by France in 1931.

Highlights: Head to the Place Royale Interpretation Centre to learn about this cradle of French civilization in North America; various exhibits and a 20-minute media show detail the neighbourhood's 400-year-old history and development. Dominating the plaza is Notre Dame des Victoires, Québec’s oldest stone church dating back to 1688. A model of the Brézé - the ship commanded by the marquis of Tracy that brought the French soldiers to New France in 1664 - is suspended from the church’s ceiling. Also visit Maison Chevalier (Chevalier House), a historical home and museum that plays a significant role in Québec’s architectural heritage. 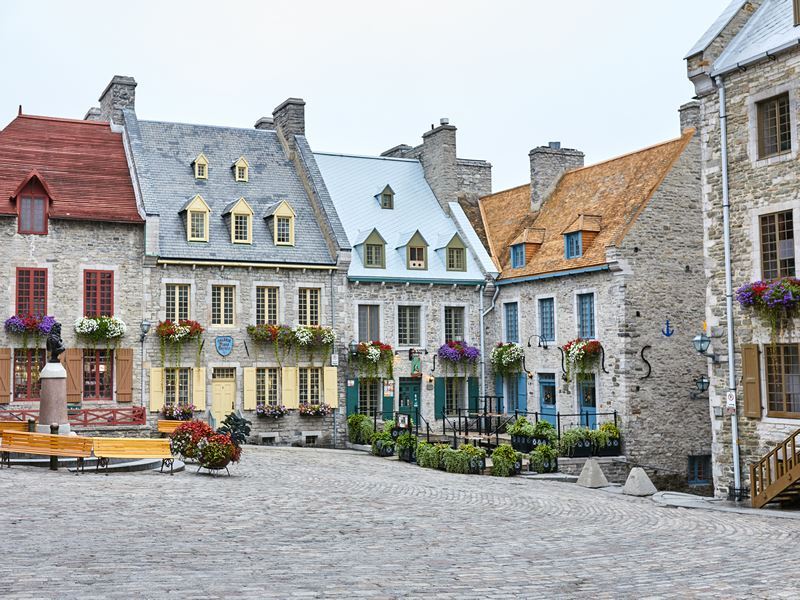 Experience colonial history at the Plains of Abraham

What: Covering 267 acres, Battlefields Park (often referred to as the Plains of Abraham) is the site for the short but crucial 1759 battle between British General James Wolfe and French General Montcalm that changed the fate of North America. Hailed as one of the world’s largest urban parks, the famous Plains of Abraham is the heart and lungs of Québec City. Named for Abraham Martin, a Frenchman who was one of the first farmers to settle in the area, it was here where the Canadian national anthem, ‘O Canada’, was first performed.

Highlights: Overlooking the wide St. Lawrence River at the city’s top-most point, The Plains are perfect for picnics, walking, cycling, cross-country skiing, in-line skating and more. For those with a taste for history, the Discovery Pavilion houses the tourist office and a historical multimedia exhibition called ‘Odyssey: A Journey Through History on the Plains of Abraham’ that is presented in English, French, Spanish and Japanese. Also nestled within the Plains is the stunning Joan of Arc Garden, which was designed in 1938 by landscape architect Louis Perron as a setting for a statue of Joan of Arc.

Highlights: Old Québec’s grand dame claims to be the most photographed hotel in the world, wowing with grand copper turrets and majestic stone towers. Spread over 18 floors, each of the 618 sumptuous guestrooms and suites are ultra-lavish in décor and design. There is also a state-of-the-art spa, indoor pool and three exquisite restaurants, including Chef Jean Soulard’s highly-acclaimed Le Champlain. Request a visit to Salon Rose (Rose Room) for great views of the mighty St Lawrence River. This famous round salon adorned with pink walls and ornate crystal chandeliers was where leader Winston Churchill and Franklin D. Roosevelt sometimes strategised during WWII.

What: Since 1879 this historic cabled railway has been used to make the 210-foot trip from Old Québec's Basse-Ville in Lower Town to Haute-Ville in Upper Town. Built using a steam system with water as a counterweight, the funicular was converted to use electrical power in 1907 and modernised again in 1998. Québec City boasts nearly 30 sets of stairs that link the Upper Town with the Lower Town so this cliff-side elevator is a godsend for both residents and tourists.

Highlights: From your seat in the funicular car's glass cabin, take in the scenery whilst travelling up and down the hill at a 45-degree angle. Landmarks include the St. Lawrence River, Le Château Frontenac, Notre Dame des Victoires, the historic Petit Champlain district and more. The funicular opens every day at 7.30am - closing time varies between 11pm and midnight depending on the season. Tickets costs £1.46 per person. The funicular’s lower entrance is located inside the mansion Louis-Jolliet at 16 Rue du Petit Champlain near Place Royale; the upper entrance is on the Dufferin Terrace, near to Le Château Frontenac. 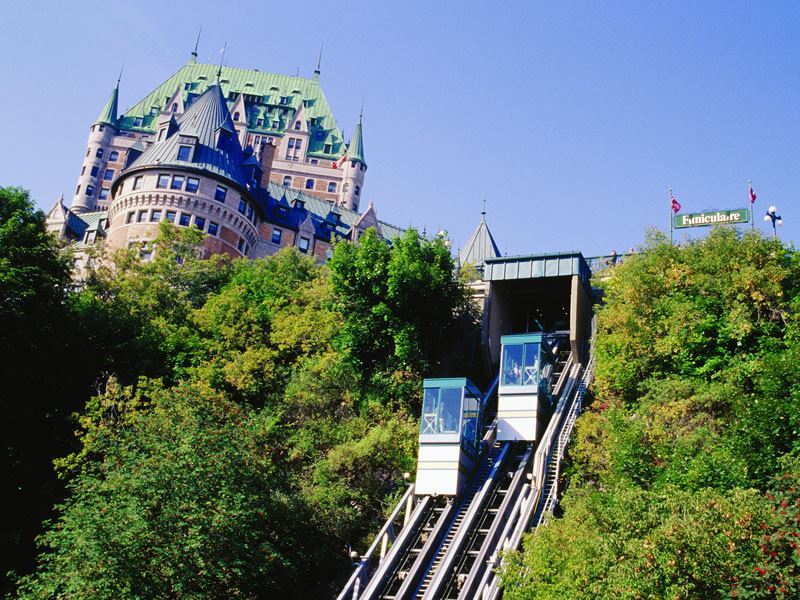