Montreal locals love to eat out. And with more restaurants per capita than anywhere else in Canada (almost 6,000 and counting), the City of Saints is enjoying a stint in the culinary limelight. We snag reservations at 10 of the best places to eat in Montreal, all of which serve up fine food worth shouting about.

10. Milos
Where: At 5357 Park Avenue, between St. Viateur Street and Fairmount Avenue.
The scene: For the city’s most interesting Greek seafood, the first branch of Costas Spiliadis’ high-end chain (it now has outposts in New York, Athens, Las Vegas, Miami and London) is all glossy décor with strategic lighting and sleek-looking tables. The concept is simple: customers get to pick their meal from the dazzling display of fresh fish that’s procured daily from the Med. They charge by the pound, so don’t be too shocked when the bill arrives.
Signature dish: For such a glitzy place, everything is prepared with simplicity. The obvious and most popular choice is the Mediterranean fish (snapper, swordfish, sea bass, porgy, John Dory, red bream, shrimp, live lobster) - most of which is taken to the kitchen to be grilled whole and dressed with oregano, olive oil and lemon. Desserts are equally delicious, especially the fabled baklava ice cream dessert with layered filo pastry, almonds, cinnamon and pure thyme honey. 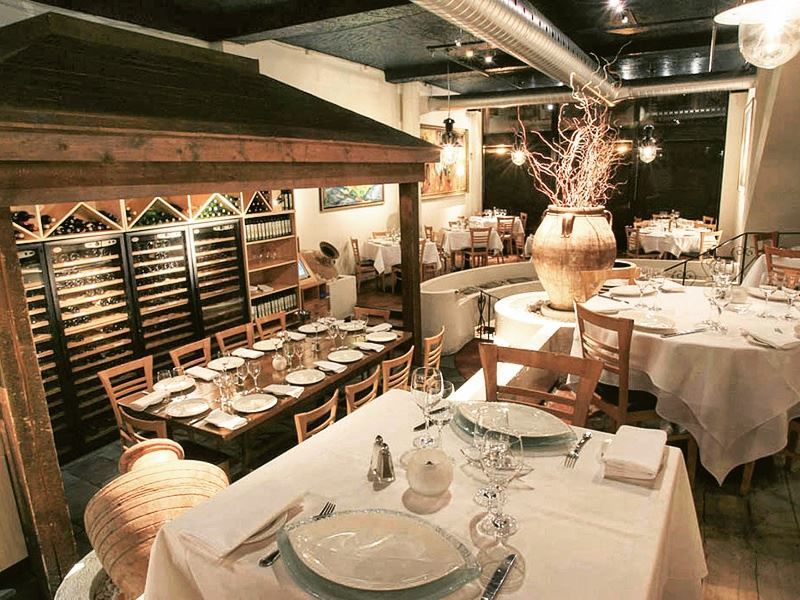 9. Toqué!
Where: At 900 Place Jean-Paul-Riopelle, at the junction of Saint-Antoine Street.
The scene: Normand Laprise and Christine Lamarche’s restaurant turned haute cuisine tradition on its head when it opened in 1993. Now over two decades (and countless awards) later, the pristine ingredient-driven food that draws focus on farm-fresh Québécois cuisine has made this place a big-hitter on the Montreal dining circuit. Diners can opt for à la carte or a seven-course tasting menu with wine pairing, both of which are as playful as the décor scheme.
Signature dish: Although the menu changes regularly, you’re likely to find some perennial favourites. Don’t miss out on the duck magret with black garlic purée, asparagus, radish, morel mushrooms and poivrade sauce, and be sure to try the halibut with herring roes, onion, salsify, dill and pickle brine sabayon. Desserts include white chocolate and sweet clover pudding, matcha tea meringue, and alcoholised coffee with chic-choc rum. 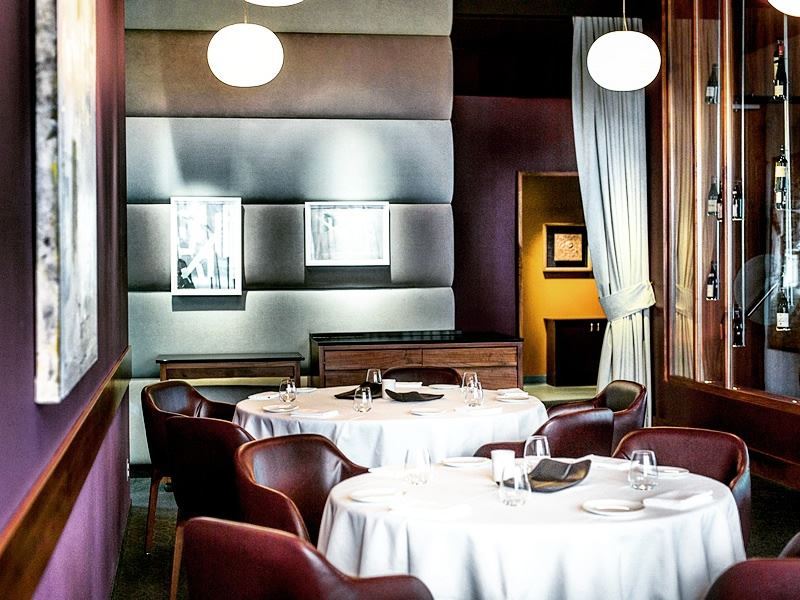 8. Le Fantôme
Where: At 1832 William Street, near St-Martin Street in Griffintown.
The scene: Opened in 2015 by chef Jason Morris and maître d’ Kabir Kapoor, this Griffintown eatery carved out an old ironworks is one of the area’s hippest newcomers. Applauded for its compact menu, there’s market-driven cuisine made with pristine ingredients, carefully-curated sharing plates, and wine that’s expertly paired with the food. As for the décor, it’s all melted candles on dressers, wall collages by the chef’s grandfather, and seating for just 30 diners.
Signature dish: The menu is short and changes weekly (based on what’s available), so there’s no chance of getting attached to one particular dish. Try the edgy stuff like the peanut butter and jelly sandwich assembled on brioche bread and layered with foie gras (known as the PBJFG) - or stick to safer mains such as seared beef tartare mixed with potatoes, raw quail’s egg and grapefruit oil, or lasagna made with slices of marinated celery root. 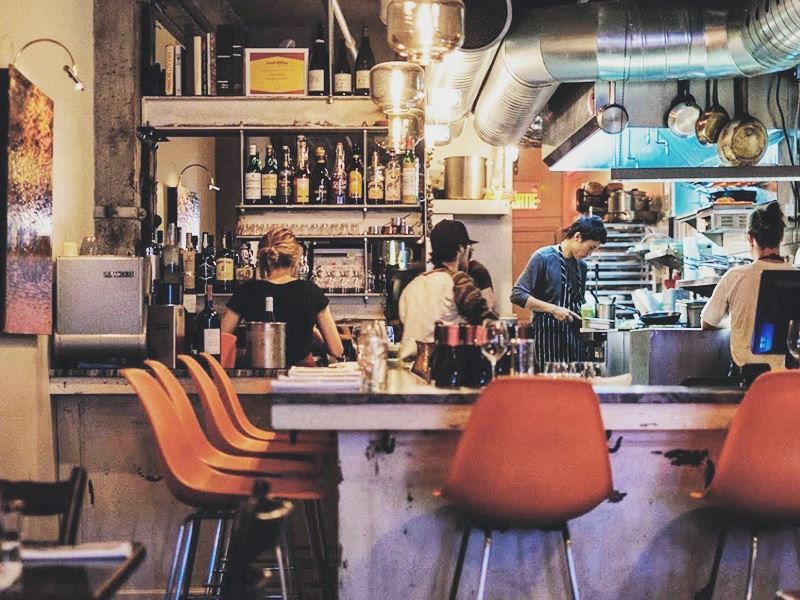 7. Restaurant L’Avenue
Where: At 922 Avenue du Mont-Royal, in the Plateau.
The scene: Breakfast is a big deal at this laid-back spot that bustles all day long with the chatter of Montreal’s hipsters who’ve dragged themselves out of bed to queue for the Eggs Benedict - the speciality that never disappoints. There’s fewer places in the city serving such wake-up worthy food, so while the menu (which is only in French) isn’t cheap, the portions are worth the price tag. Be sure to visit the loo while you’re there - you can see yourself from all angles.
Signature dish: The not-to-be-missed Eggs Benedict comes with a side of fluffy potatoes and either a giant fruit kebab, sausage, or duck confit. If you’re not a fan of eggs, go for the tasty pancakes with bacon, cheddar cheese, sautéed apples and maple syrup. The impressive lunch menu has some odd but pleasing pairings; the omelettes, club sandwiches, and burgers are among the standouts. 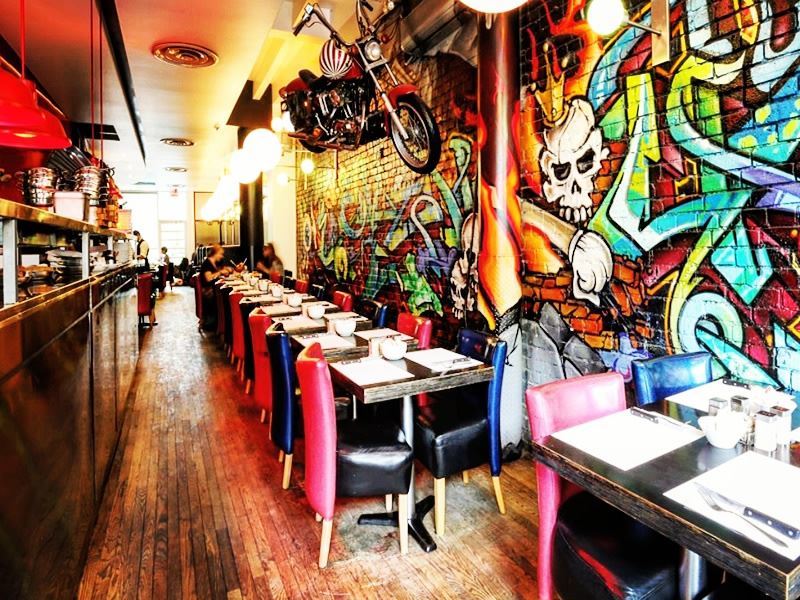 6. Kazu
Where: 1862 St Catherine Street West, near St. Marc Street.
The scene: For all-the-rage izakaya-style dining that’s casual and snacky, this tiny space with just a handful of tables and a few seats at the bar is big on Japanese eats that go beyond sushi. Expertly run by Kazuo Akutsu and his wife Yuko, there’s a rudimentary menu written on coloured paper and taped to the wall offering dishes that have serious foodie credentials. Designed for sharing, most plates are very well-priced.
Signature dish: The crispy BBQ chicken tortilla salad with Japanese caesar dressing, beef carpaccio, and nabemono with BBQ chicken, tofu and vegetable soup are both excellent starters, but it’s the 48-hours pork bowl with soy sauce that’s the most memorable. Follow this with the house-made soft ice cream (made without egg or cream) that comes in a choice of flavours: green tea, coffee, caramel, plum, coffee, wasabi, and rum raison. 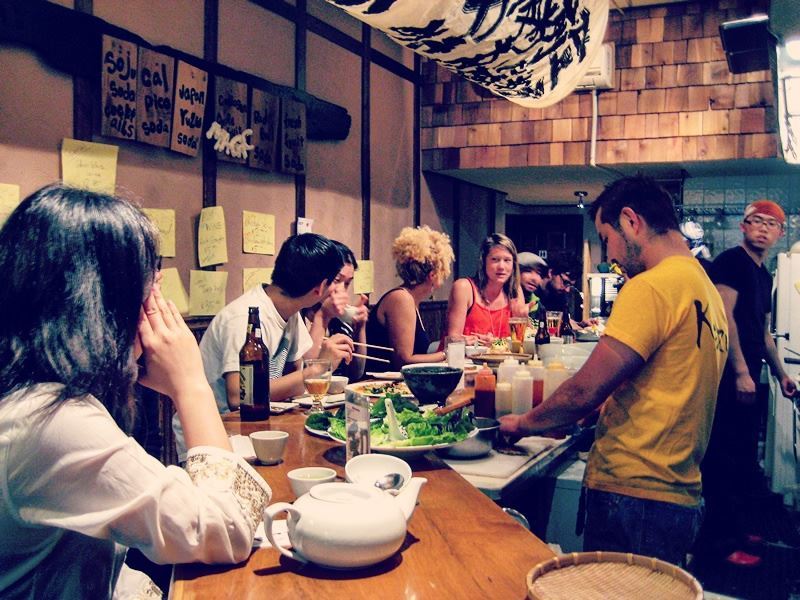 5. Wilfrid sur Laurier
Where: 222 Laurier Avenue West, near Jeanne-Mance Street.
The scene: The vision of dynamic duo of Michel Ross and Zach Suhl is a trendy newcomer characterised by exposed brick walls, bistro-style tables, and a lovely terrace for summer dining. The contemporary French cuisine is outstanding, but what’s most likely to make you go ooh la la is the superb brunch menu. Overall, the prices are wallet-friendly given the glamorous location in Mile End, just to the north of the fashionable Plateau neighbourhood.
Signature dish: Dishes such as salmon gravlax with buckwheat pancakes, Challah French toast with caramelized apples, pastry cream and crème fraiche, and classic croque-madame with fries or salad go down a treat. Other brunch high points include the house granola with yogurt, seasonal fruits and raw organic honey, the fresh herb omelette with mushrooms on toast and roast potato, and the chipolata sausage with two eggs, crispy polenta and romesco sauce.

4. Europea
Where: 1227 Rue de la Montagne, near Sainte Catherine Street.
The scene: Every accolade has been deservedly heaped on celebrity chef Jérôme Ferrer and his 22-strong team for their inventive French plates and tasting menus. But it’s not just about the top-notch cuisine at his dramatic three-storey space that opened in 2002. From the outside it looks like any other Victorian-style Montreal townhouse, but inside its all ultra-contemporary décor with warm colours, local materials, exposed brick walls, and modish design elements.
Signature dish: Market-fresh cuisine with a Québécois accent is revealed on the four-course discovery menu and the five-course tasting menu, both of which have ‘gold’ options for an extra charge. Don’t miss out on the lobster cream cappuccino with truffle puree, the caramelized scallops with lemon juice and yuzu, and The AA Angus beef sirloin with pont neuf potatoes, wild mushrooms, and runny quail egg. 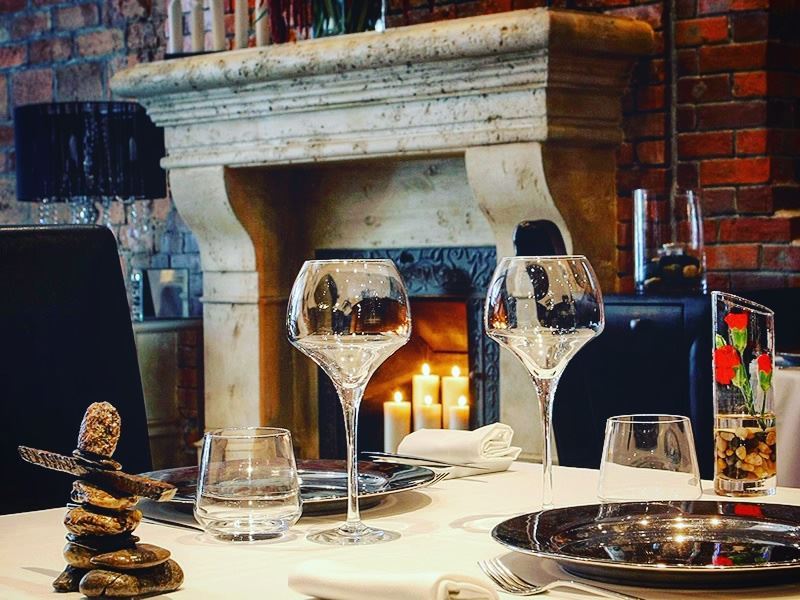 3. Damas
Where: At 1201 Avenue Van Horne, on the corner of Bloomfield.
The scene: Arabesque décor with rich red accents, statement-making lanterns, exquisitely tiled flooring and a glassed-in wine cellar sets the scene at this smart Syrian spot headed up by award-winning chef Fuad Alnirabie. Not only is this one of the best places in town for foodies keen to try out new Middle Eastern flavour combinations, but it goes beyond the hot and cold mezze options with plate after plate of truly breathtaking house specialties.
Signature dish: While the tasting menu and shared platter are a good bet, it’s the individual dishes that are most worthy of your attention. These include the moujaddara with braised lentils, bulgor and caramelised onions, the bamia with braised lamb, okra, tomato, prunes and apricot, the sharhat with veal filet mignon deglazed with lemon, garlic and Aleppo pepper, and the samké harra with sea bass stuffed with walnut, coriander and spiced vegetables. 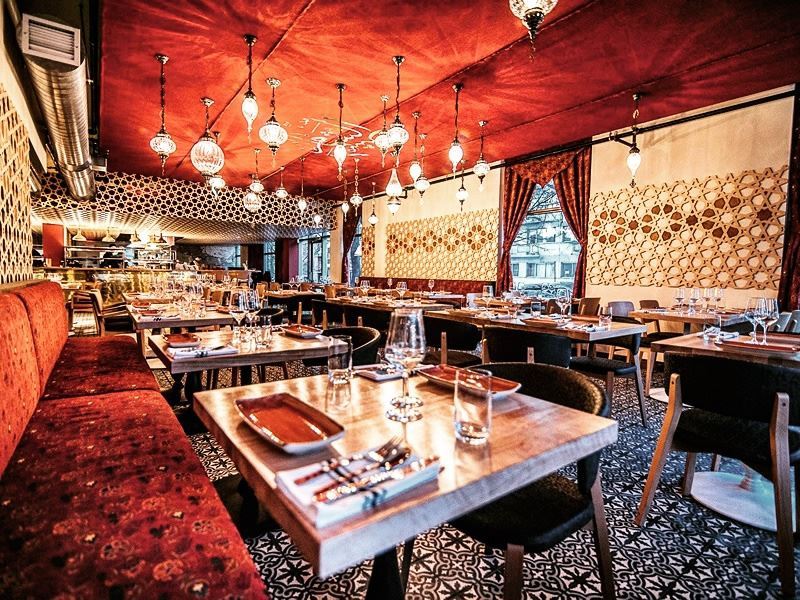 2. Bouillon Bilk
Where: At 1595 St-Laurent Boulevard, near de Maisonneuve Boulevard.
The scene: Minimalist décor gives French cuisine the spotlight at this gourmet spot that opened in 2011 on the edge of the city’s entertainment district known as Quartier des Spectacles. Offering a simple list of around 15 dishes split between appetisers, mains and desserts, every plate is loaded with unexpected ingredients pairings by co-owner chef François Nadon, deputy chef Tristan Houghton, and pastry chef Melody Perez-Mousseau.
Signature dish: After working your way through the strawberries with feta, poblano, ginger, sesame and onion or the duck fat with liver coffee, dates, Jerusalem artichokes, radicchio, kamut and hazelnuts, go for one of the intriguing but flavoursome mains. Sample dishes include the mackerel with sweetbreads, white asparagus, butter dashi, plum and samphire, or the beef with squid, broccoli, cashews, mushrooms and harissa. 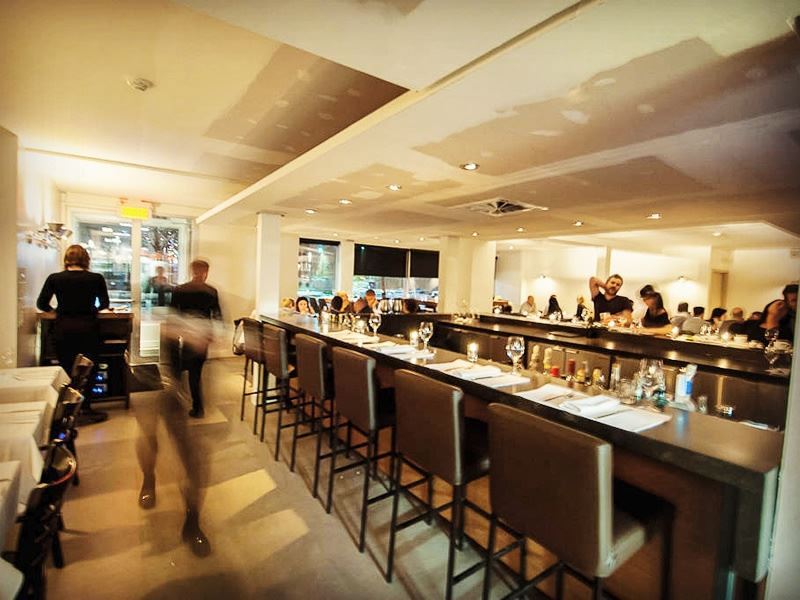 1. Les Deux Singes de Montarvie
Where: At 176 Saint-Viateur West, in Mile End.
The scene: What this top-ranking restaurant lacks in space (there’s just nine tables and seven counter spots), it makes up for with steampunk light fixtures, eclectic paintings by local artists, vintage glass lamps, a sleek palate of browns, and an almost tangible sense of intimacy. As for the food, it’s a tiny but game-changing French menu with revolutionary cooking methods, textures and tastes courtesy of chef and co-owner Sean Murray Smith.
Signature dish: In addition to the daily specials, there’s a set tasting menu and vegetarian tasting menu that changes regularly. Best dishes include the lamb tartare with octopus, the pork chop with artichoke aioli and lemon thyme, and the vegetable tempura with eggplant and marinated egg yolk. Desserts are worth sticking around for, especially the delectable Ile Flottante with sour cherry and kiwi. 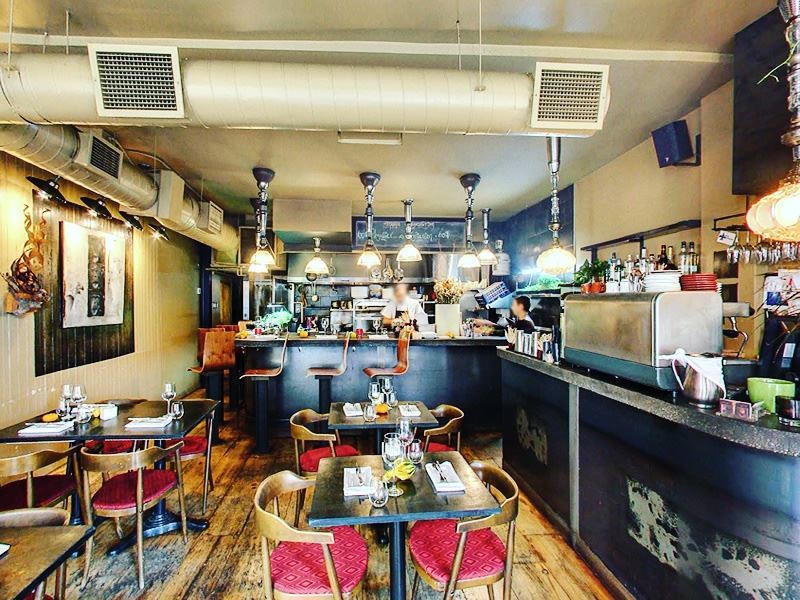