The Canadian Rockies are truly one of the world’s most magnificent places – a destination that offers the experience of a lifetime with dramatic peaks filled with gem-coloured lakes, waterfalls, roaring rivers, abundant wildlife and opportunities for a wealth of recreational activities.

This road trip through the Rockies from Calgary to Vancouver is arguably the very best way to take in these glorious mountains, from hidden treasures to world-renowned attractions. 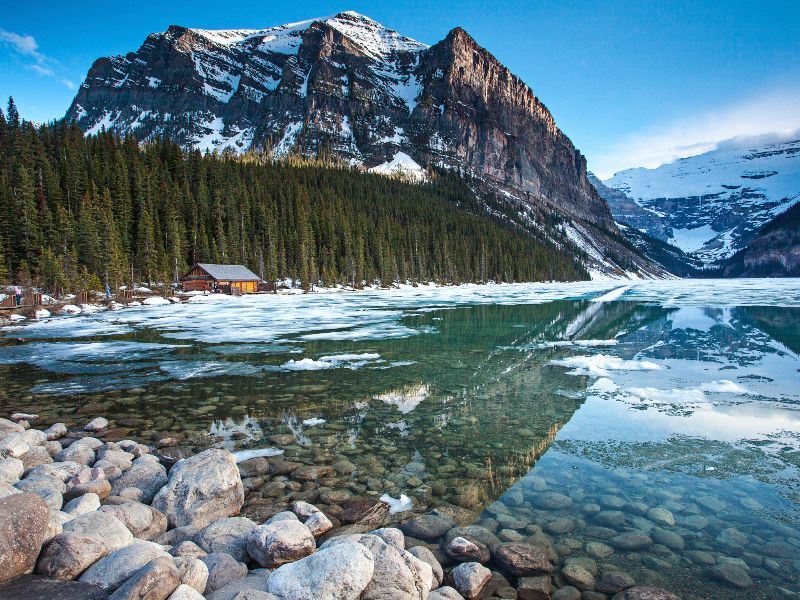 The Calgary Stampede, and the 1988 Winter Olympics, was what put Calgary in the spotlight, making it one of Canada’s most popular tourist destinations. This is where your journey begins, and you’ll find plenty to keep you busy here before heading to the majestic Canadian Rockies. You might want to begin by whizzing to the top of Calgary Tower, which rises over 625 feet above the city, providing a perspective of its layout and an impressive view. Standing on the glass floor, it feels as if you’re floating over the streets while taking in a magnificent 360-degree vista. You’ll find the SKY 360 restaurant here, a perfect place to dine on appetizers or sip a refreshing drink while enjoying the revolving views.

Calgary has an interesting history that can be explored in a number of ways. Heritage Park is the country’s most extensive living history museum and hosts 200 exhibits bringing to life various periods from the mid-1700s through the mid-20th-century. It includes a turn-of-the-century living historic village, with a blacksmith shop, an historic steam train, working press and even carnival games from the early 1900s. There’s also a First Nations Encampment, a Fur Trading Port and a Pre-Railway settlement. At Fort Calgary History Park, you’ll find the remains of the original mounted police stronghold. It lies buried underneath the city where the Elbow and Bow rivers meet until it was resurrected in the 1970s, and today you can wander through reconstructed barracks for a glimpse of the lives of Mounties in the west as well as indigenous people.

The Calgary Zoo is a great place to visit before getting out on the road, offering the chance to see some of the animals you might witness on this unforgettable drive, including grizzly bears and mountain goats. It also hosts wildlife from across the globe like mountain gorillas, giraffes, hippos and more. 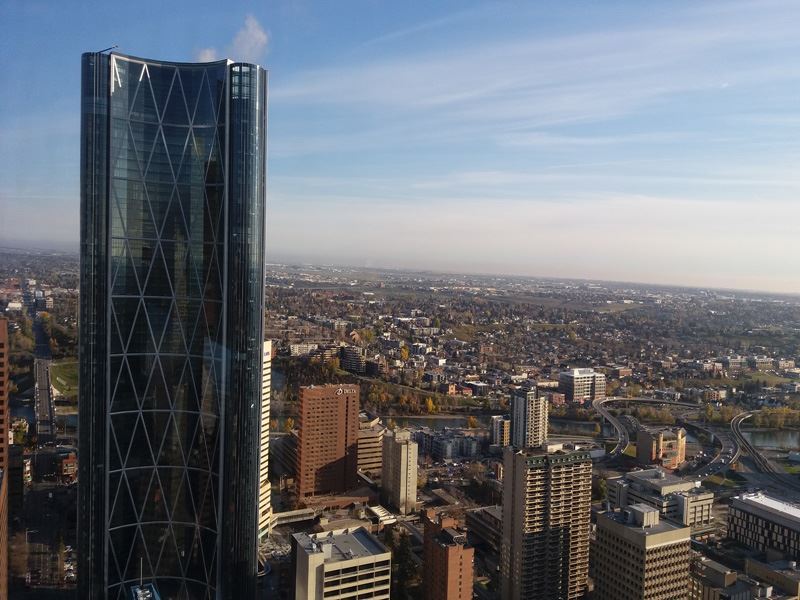 Journey west from Calgary, the craggy peaks of the Rockies are an especially impressive sight and home to your next destination: Banff. This town nestled in Banff National Park in the heart of the Canadian Rockies looks like a Swiss ski village that was stolen and deposited right in Canada. The village boasts a thriving arts and culture scene, with art galleries and museums, concert venues and a wide range of shops and eateries. Enjoy exploring, stopping into the Whyte Museum of the Canadian Rockies with its ever-changing art gallery featuring works from 1800 through today by international, Canadian and regional artists as well as a permanent collection that tells the story of Banff and its early pioneers.

Visitors can also ride the Banff Gondola to summit a peak near the village, with the cars ascending to the top of Sulphur Mountain. Take in epic views along the way, and at the peak, you’ll find a gift shop, eateries, interactive exhibits and a 360-degree observational deck with views of the Bow River Valley and Banff. Afterwards, enjoy a soak in the warm waters of Banff Upper Hot Springs, pools that are fed by natural hot springs known for their healing properties that were popular with First Nations people who considered them to be a sacred place, using them to rest and relax.

Banff National Park itself is filled with some of the most dramatic mountains that have been likened to ‘giant castles in the sky,’ providing endless opportunities for outdoor adventure like hiking, mountain biking and climbing. 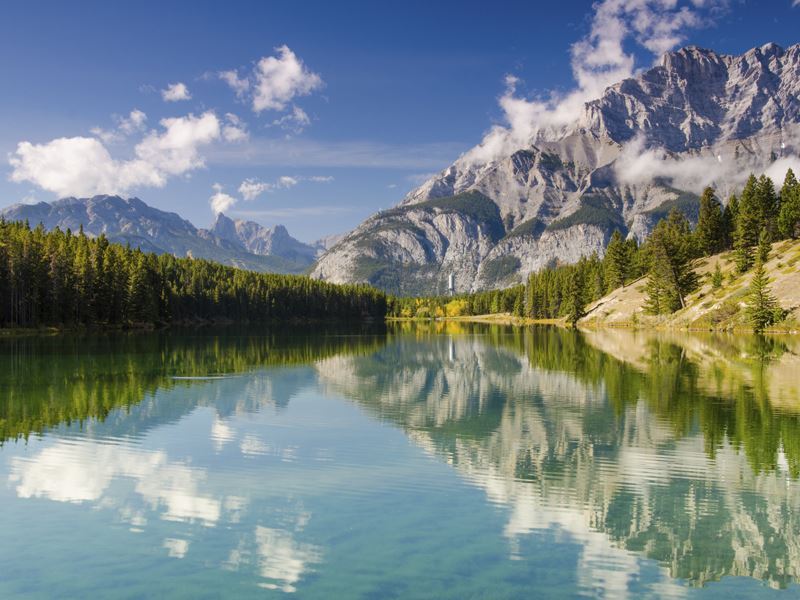 Delving further into Banff National Park, visit Moraine Lake and Lake Louise, two of its most popular lakes, and arguably two of the most stunning on the planet. Glacially-fed Moraine Lake is located in the heart of the park, and in early summer the water levels rise, casting an ethereal shade of blue due to rock particles in the water. The shoreline is often visited by deer, and the occasional bear too. It’s a great place to rent a canoe and paddle around, capture photos or enjoy walking the trails.

Lake Louise is another gem that is guaranteed to provide picture-perfect photos while offering a number of fun and scenic things to do. If seeing a grizzly bear in the wild is on your bucket list, you won’t want to miss a visit to this lake as it’s a prime grizzly bear breeding area. Females and their cubs are often spotted feeding in the meadows in the spring. The Plain of Six Glaciers Trail leads from the lake and passes through gorgeous landscapes leading to Victoria Glacier, with bears frequently feeding on grassy slopes in the summer and early fall. If you enjoy a good afternoon tea, the two-mile hike to the Lake Agnes Tea House is another option traveling from Lake Louise and guarantees an especially scenic cup. 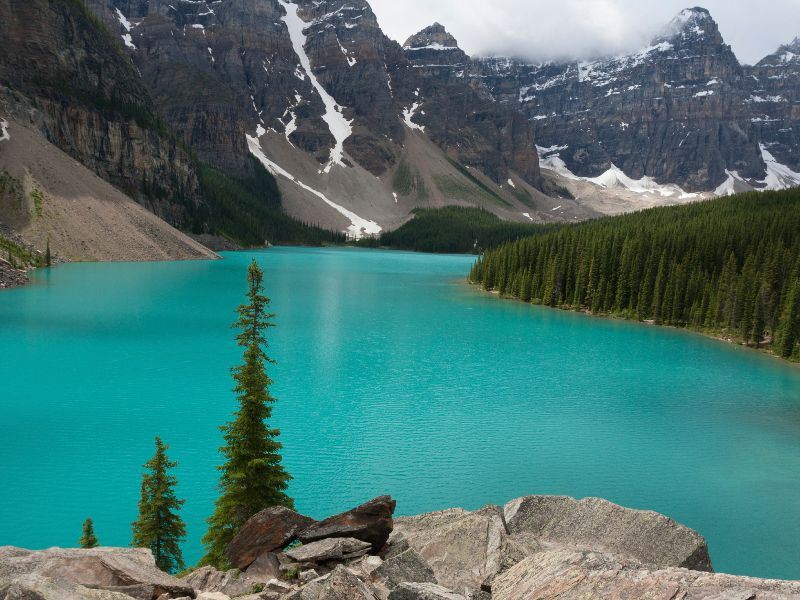 Heading to Jasper National Park, Canada’s largest national park and the world’s second largest dark sky preserves, you’ll embark on one of the world’s most scenic drives. Icefields Parkway stretches for 143 miles starting just outside Lake Louise. The iconic highway traces the Continental Divide and is surrounded by jagged peaks in every direction and passes countless rushing rivers, mirror-like lakes and glaciers, with opportunities to spot wildlife like caribou, moose and bear. The Athabasca Glacier, the largest of the six ‘toes’ of the Columbia Icefield, is quickly disappearing, having lost over half its volume in in the last 125 years, so you don’t want to miss out before it disappears altogether. It’s still a remarkable mass of ice that’s about as thick as the Empire State Building is tall. You can take a tour of this prehistoric glacier, traveling on the icy surface aboard the giant Ice Explorer. You’ll even be able to walk, feel and drink from the glacier too. Afterward, take a thrilling walk along the glass-floored Skywalk at the edge of a cliff that was designed to blend in with the natural landscape. Massive glaciers will be perched above you while the breath-taking Sunwapta Valley is spread out below.

Athabasca Falls is nearby, just off Icefields Parkway, and is one of the most powerful in the Canadian Rockies. Fed by the Columbia Icefield, the sheer volume of water that flows into the gorge from Athabasca River is a sight to behold. You can walk out onto multiple platforms and pathways to capture a photo and just enjoy its mesmerising beauty. If you want to explore the park on a hike, there are 615 miles of trails that run through valleys, forests, alpine meadows, along rivers and through the mountains. The park protects an abundance of wildlife too, including some of the continent’s healthiest populations of moose, elk and grizzly bears. 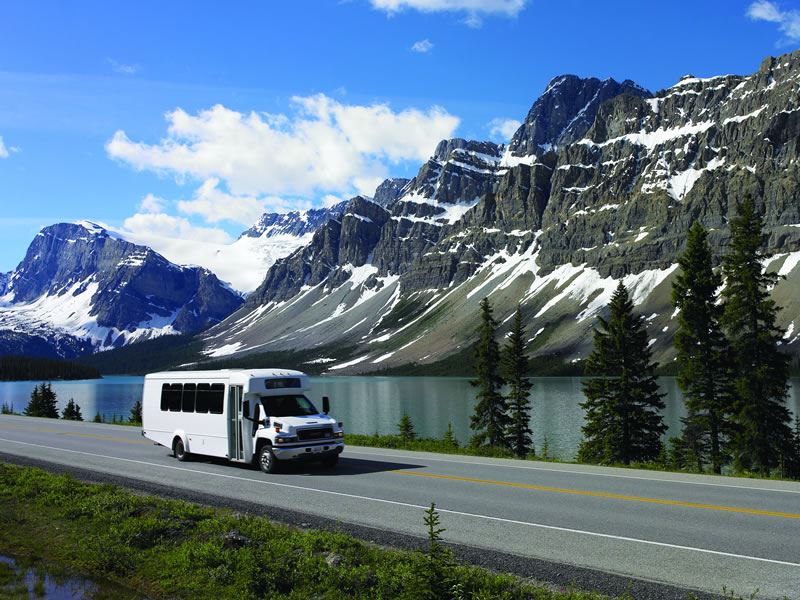 From Jasper, travel to the resort town of Sun Peaks, stopping in Wells Gary Provincial Park along the way where you can hike to waterfalls, enjoy the pristine Clearwater River, explore volcanic canyons and caves, or just relax on a riverside beach.

Sun Peaks Resort sits in a valley ringed by three mountains, offering a wide range of outdoor adventure as well as festivals, concerts and other events on summer weekends. You can take a two- or four-hour horseback ride surrounded by gorgeous views, golf the province’s highest-elevated course, or hike one or more of 18 trails, some of which meander through wildflower-filled alpine meadows. If you’re here over the last weekend of July, attend the Alpine Blossom Festival, which honours the peak of the wildflower season with all sorts of activities and entertainment in the village. You’ll find plenty of restaurants and shops to enjoy here too.

Make your way to B.C.’s largest city, Vancouver, but be sure to stop at Fraser Canyon along the way. This major landform of the Fraser River is where it powerfully descends through narrow rock gorges in the Coast Mountains. At Hells Gate, the canyon walls soar nearly 3,300 feet above the rushing rapids where more than 750,000 litres surge through every minute. Hell’s Gate is a scenic attraction – an airtram that carries passengers over the raging Fraser River to the opposite shore. In the lower terminal there are a variety of educational exhibits and displays, and visitors can also test their skills at panning for gold. There’s a café, gift shop and a Fudge Factory that features more than 100 flavours, all made right onsite. 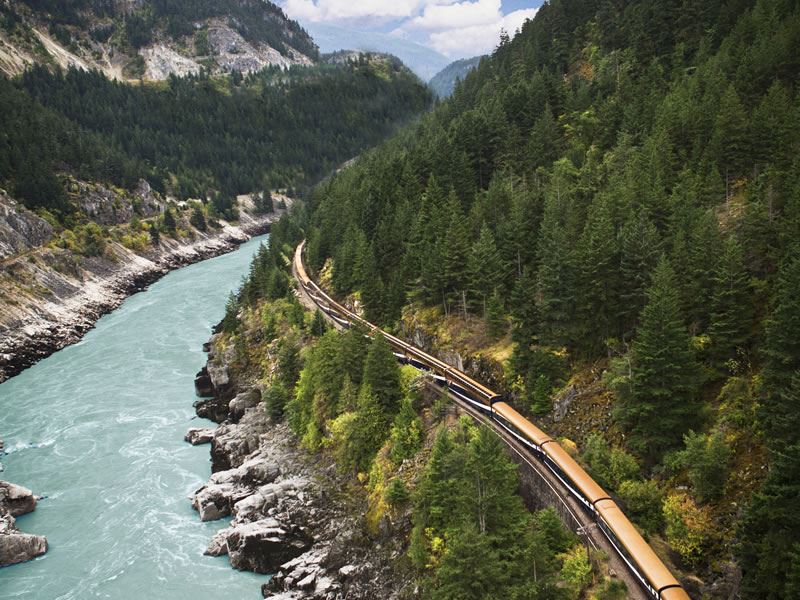 Vancouver is an ideal place to end this magical adventure through the Canadian Rockies. You’ll be in awe at its incredible beauty, surrounded by water and mountains. One of the best views of it all can be had from the Vancouver Lookout at Harbour Centre which towers above the city streets, providing a perspective of the layout as well as hosting the ‘Top of Vancouver’ revolving restaurant for dining with ever-changing spectacular views. This is a true foodies’ haven, with the diverse population resulting in a wide range of cuisine offered here, including fresh local seafood and other regional delights, along with Italian, Indian, French, Greek, Vietnamese and just about everything your heart desires. Sample it in farmers markets – the Granville Market is ideal, as well as everything from quaint cafes to fine dining eateries.

Visiting Stanley Park is a must – before flying home or wherever your travels might take you, stretch your legs with a walk along its nearly 5.5-mile-long seawall that runs along the waterfront. Enjoy the views and look for landmarks like the “Girl in a Wetsuit,” a mermaid sculpture and the Siwash Rock rising out of the water that’s a remarkable 32 million years old. There are inland trails that snake through the forest, a fantastic aquarium, water park, heated outdoor pool and a miniature train too. A harbour cruise is an ideal way to take in the city skyline and mountains from atop the sparkling waters and could make for the perfect grand finale. A sunset dinner cruise sails under the Lions Gate Bridge, passing Stanley Park and the Lookout Tower, allowing passengers to dine on a mouth-watering feast while enjoying the sights. 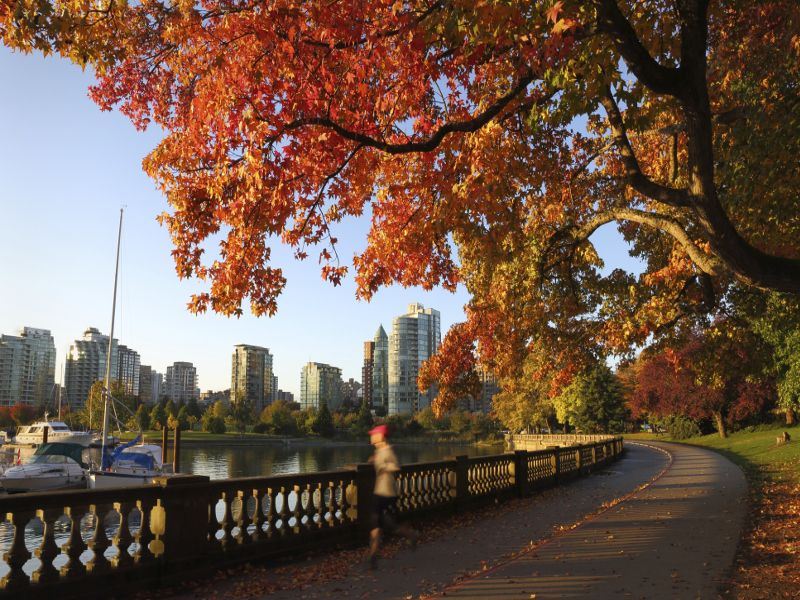 Majesty of the Rockies